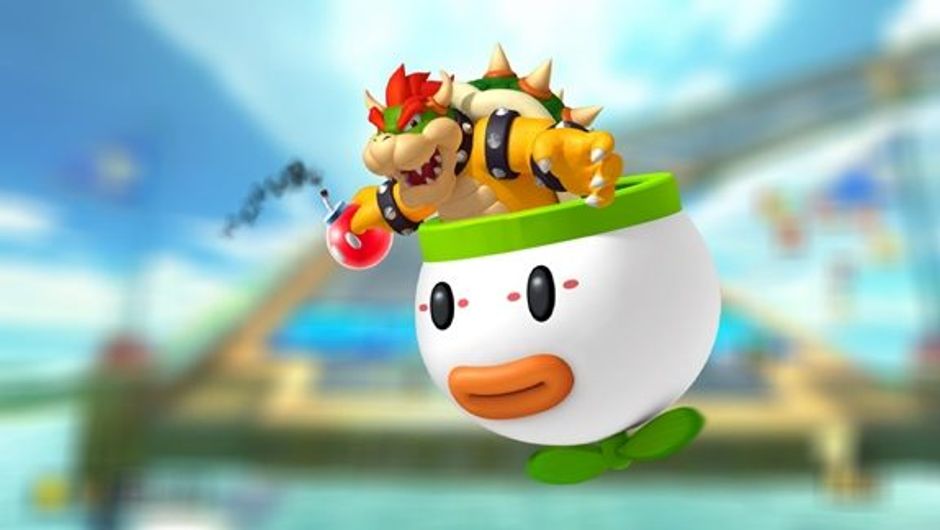 A Deluxe-only kart: The Koopa Clown.

Another Nintendo console, another Mario Kart game - but this time it’s a re-release. Is it still worth buying? Check out our video for review of Mario Kart 8 Deluxe on the Nintendo Switch.

We all know the franchise but let's do a quick history refresher. The first Mario Kart game, Super Mario Kart, was released for the Super Nintendo in 1992. Since then it has become a mainstay title for every Nintendo console, with the exception of the Game Boy and Virtual Boy. 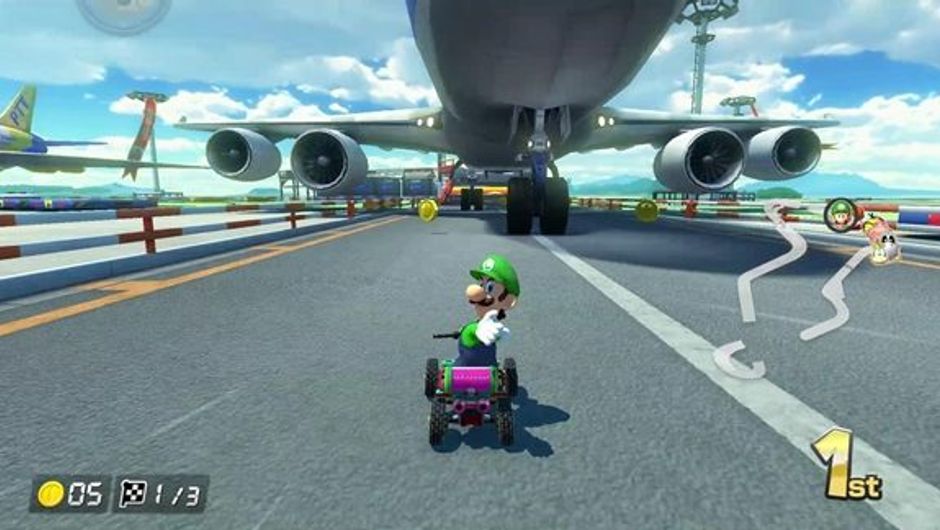 Mario Kart walks the great tightrope of between casual and hardcore. For pick up and play fun, go into Grand Prix mode and select 50cc and work your way up for more challenges. In the last 25 years, each new Mario Kart game has sought to utilise the new hardware and provide a change to the gameplay: 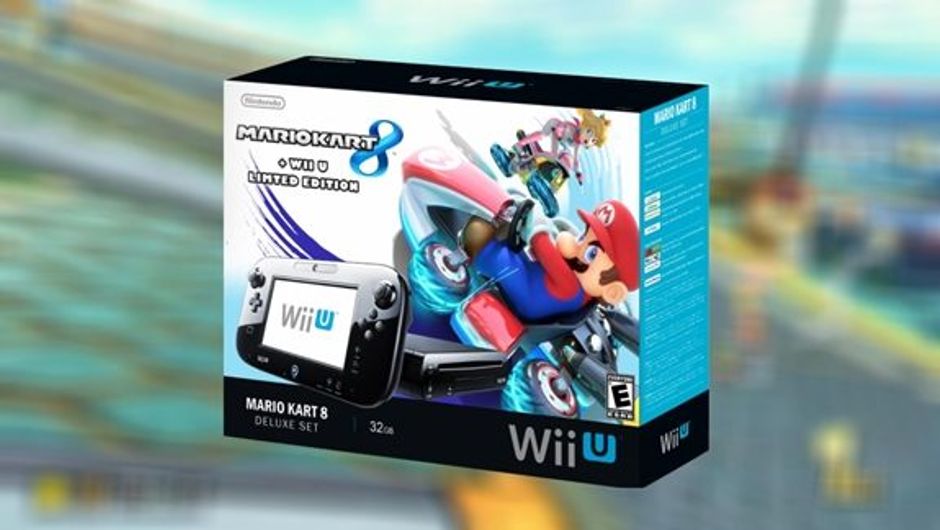 But does it deserve the title Deluxe? Should owners of the original on Wii U buy this new version for the Switch? TL;DR - Yes it does. Yes you should.

Mario Kart 8 Deluxe features some new stuff for racers. Unfortunately no new tracks though, which is a shame. You get the previous course from Mario Kart 8 and all of the DLC. Five new characters with Inkling Boy and Inkling Girl from Splatoon, King Boo, Dry Bones, and Bowser Jr. A sixth unlockable character, Gold Mario, can be achieved by for completing every cup at 200cc. 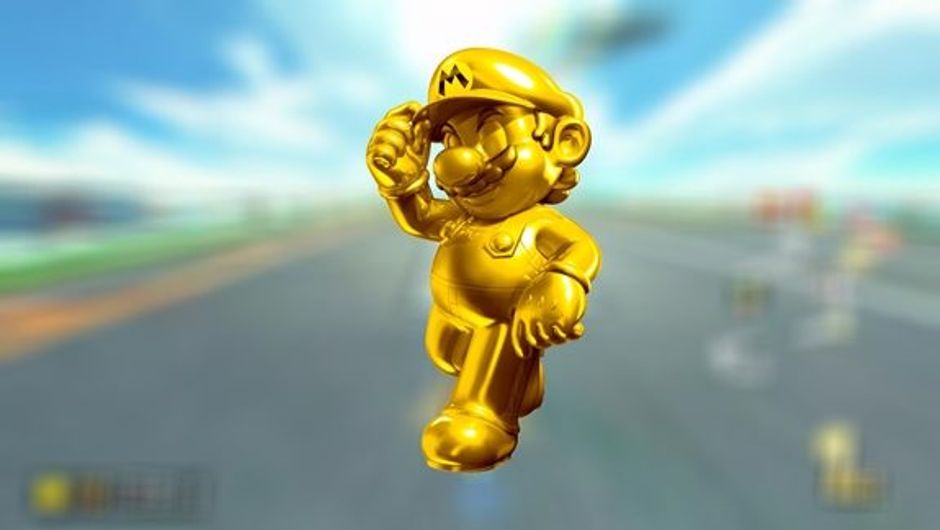 Three Deluxe-only vehicles - the Koopa Clown and two inspired by Splatoon. New amiibo costumes for the Mii racer based on Splatoon figures. In addition, the Shine Thief and Bob-omb Blast battle games from Double Dash!! return as playable options in Battle Mode along with a new mode, Renegade Roundup. But we will talk about that later.

And it’s not only just new stuff - the game has clearly been patched to fix some slight bugs, issues and glitches that occurred on the Wii U version. Also, the "fire hopping technique", for the most hardcore of time trialers, has now been removed. Although this technique could be used online to remove some seconds, it was very rarely seen.

Mario Kart 8 Deluxe has a great variety of game modes to keep you happy and clearly getting value for your money.

Grand Prix - Players compete in cups, groups of 4 courses each with 4 difficulty levels: 50cc, 100cc, 150cc and 200cc. As the level increases, the vehicles will go faster. These are divided into two groups Nitro, being the new tracks, and Retro, tracks from previous Mario Kart games.

Players earn points according to their finishing position in each race and the top three players with the most points overall will receive a trophy. Once you get bored  playing against the computer, online is a great way to continue the fun, as you notice the difference in driving styles from real people to the AI. 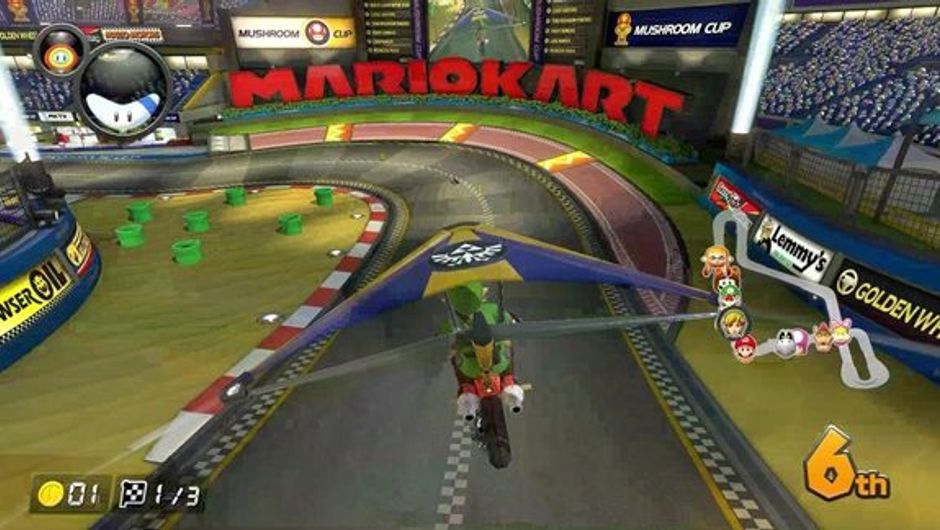 Time Trial - The player races alone in order to finish any course in the fastest time possible. The best time is then saved as a ghost, which the player can compete against in later trials. 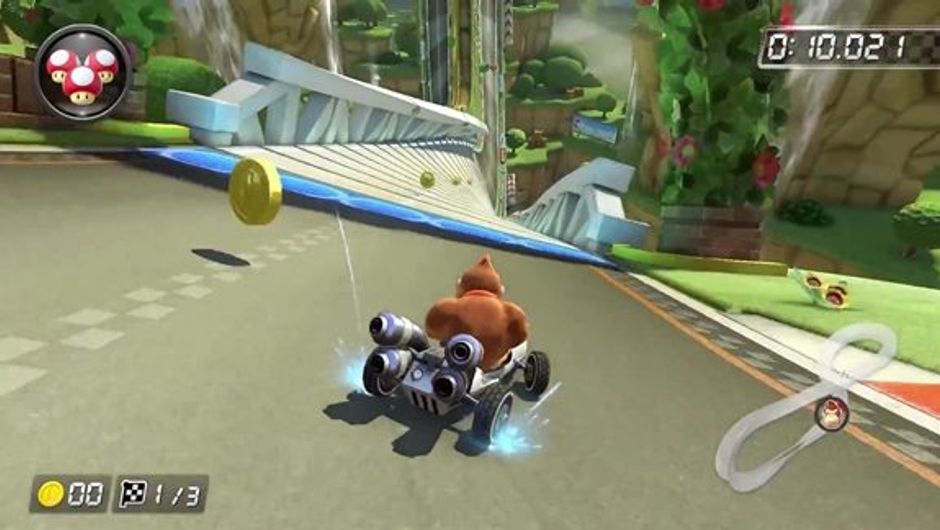 VS - Multiple human players race against each other on any course with customised rules such as team racing and item frequency. 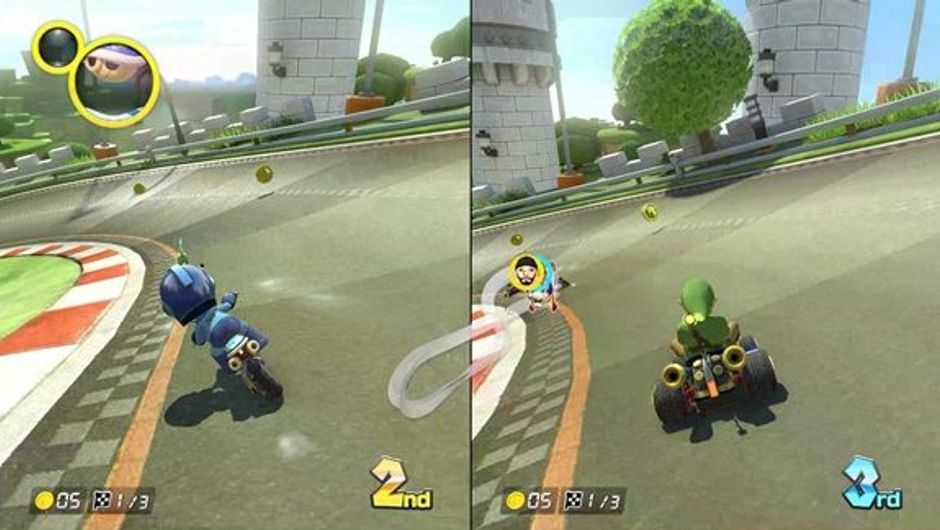 Battle Mode - This is where the majority of the changes and revamping have been made to the game, and it’s so much better for it. Unlike previous games, each player starts with 5 balloons, as opposed to the normal amount of 3. Another addition to Battle Mode is that the character in the lead now wears a crown, unlike Mario Kart 8, where the crown is displayed only on the HUD map.

Additionally, players now start out with 0 points instead of Mario Kart 8's default 3 points, and their balloons do not serve as the remainder 3 points. Returning from Mario Kart Wii and Mario Kart 7 is the ability to respawn after all balloons are popped - this causes the player's total score to halve and respawns with 3 balloons instead of 5. A new addition to this mode is the feature to tell exactly which character hit whom, which appears on the bottom of the screen. 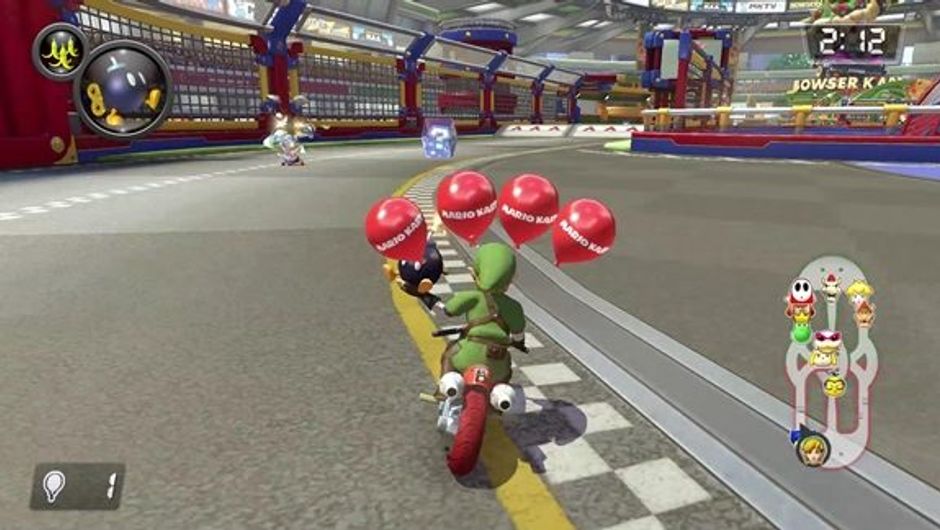 Along with local multiplayer, Mario Kart 8 Deluxe supports online multiplayer for up to 12 players, playable with friends, or with strangers both regionally and worldwide. All messages between players are from a pre-determined list by Nintendo, so there is no abuse and no chat - just good clean Nintendo fun.

Nintendo You can now change your kart whilst in an online lobby. Yay! 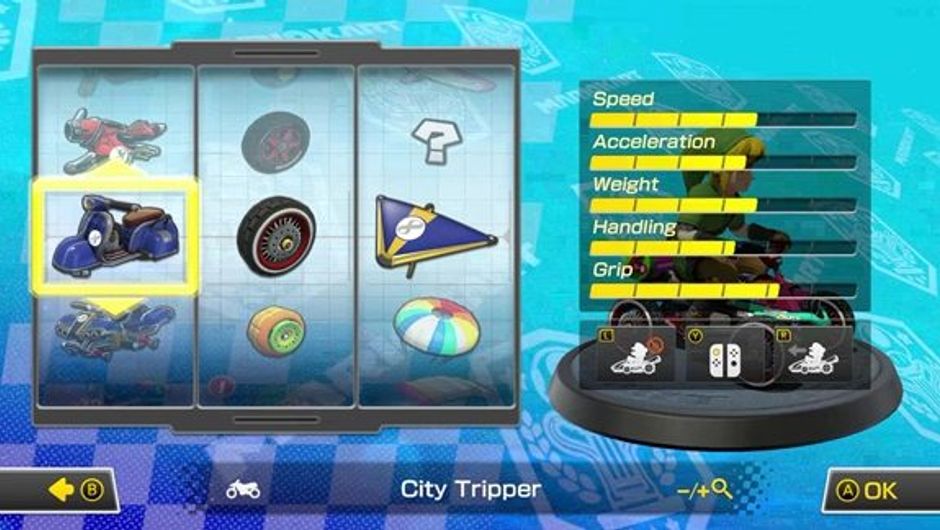 Now, you have the added option to change karts and characters in online lobbies, which is the greatest thing about this game as on the Wii U version you had to leave a lobby to change your kart. It’s such a small change but really makes a big impact to your enjoyment when playing online.

The controls of the game, as with pretty much every Nintendo game, except Star Fox Zero, are excellent. Quick, responsive, no lag and perfect button placement. The game works great with the Pro Controller, and with two Joy-Cons in a grip. Motion controls are still here, if that's your thing, and they are acceptable. Not my own cup of tea but good.

Nintendo The controls feel great, even in 4 player mode. 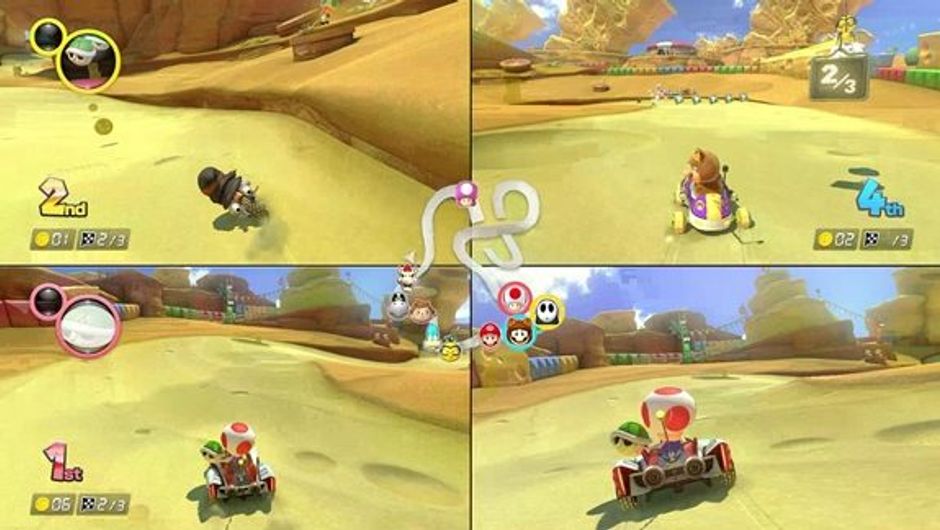 To put the controls to the test for this review, I recruited three other grown men to use a single Joy-Con each and crowd around a portable Switch to play like true Nintendo millennials. Surprisingly enough, it actually works. We played for a good hour and I was expecting a hand cramp, but it never came. Again, I'm shocked to say it actually works. We are now hip, rooftop millennials.

Just as the game was on the Wii U, it is a delightful, colourful palette that just screams fun. The graphics are the antidote to the drab brown and greys that has filled gamers libraries for the last 10 years.

The Mario Kart series features arcade style racing, so if you want something like Gran Turismo or Forza, this is not for you. If you want to be a dinosaur on a motorcycle throwing turtle shells at a baby princess while racing along a beach, you couldn't ask for a better experience and the graphics work well with the gameplay to make for a fun time.

Nintendo The graphics are pretty sweet, wouldn't you say? 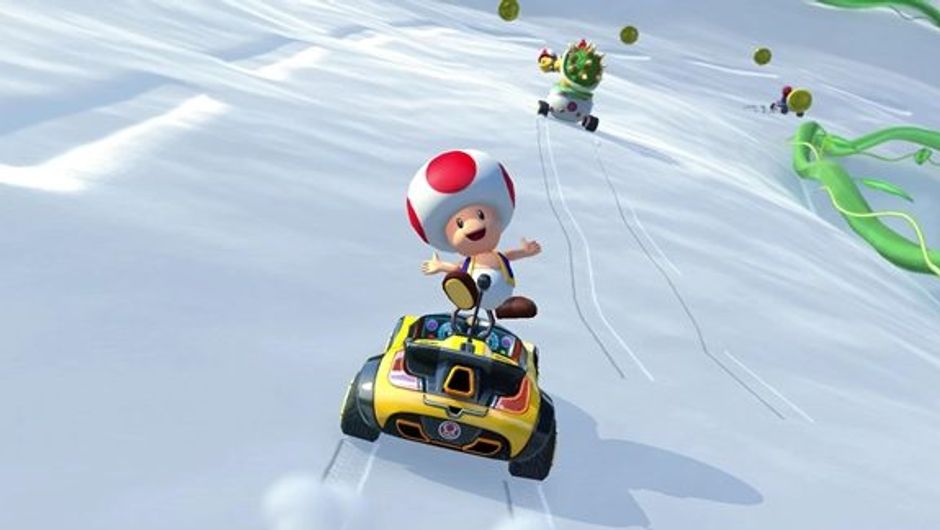 On the Switch, the game looks even better now at 1080p than 720p on the Wii U. Like the Wii U, the game has 60fps but switches to 30fps when playing on a single Switch with three or four players.

The soundtrack and effects for Mario Kart 8 Deluxe are of exceptional quality. The music gets into your head and heightens the colourful graphics. The same applies to the sounds of the vehicles when accelerating, braking, jumping and drifting. Each character has their own voice and they will occasionally let out a yay or a nay - depending on what is happening.

Nintendo The sound of your kart drifting is really something else in Mario Kart 8 Deluxe. 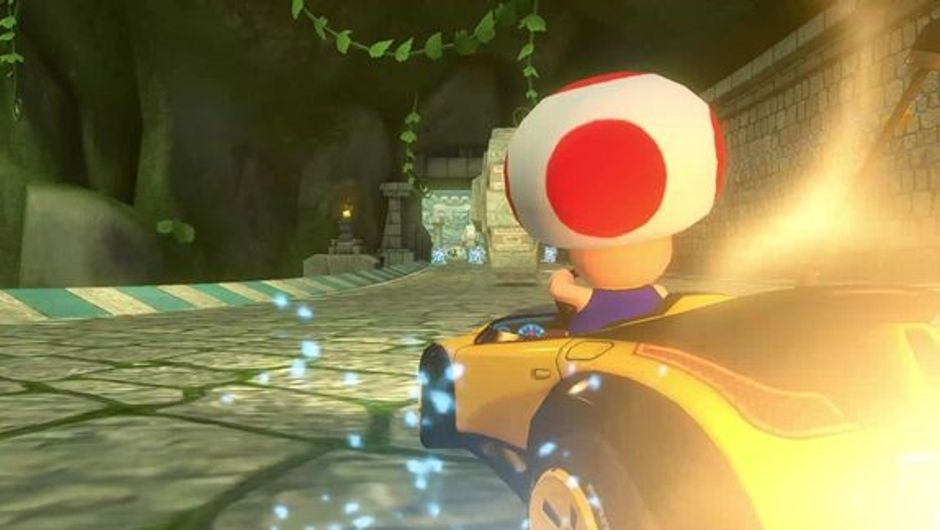 Add to this, you have the constant sound of power ups going off all around you. In lesser developers hands, this could result in a distorted audio experience with everything blurring into a single audio track and sound like you are being nagged by 12 children with different toys in a nightclub.

In this game, everything works harmoniously together and flows into a beautiful experience with players having complete understanding of where they are and who's around them. And this isn't just in single player mode - even in offline mode with four players, everyone can focus on where they are and hear it all clearly.

Overall, Mario Kart is a great addition for a Switch owner. It is the same basic game that has been out with each Nintendo console, but this is not a franchise that pumps out the same thing every year with slight tweak upgrades.

Nintendo This game is definitely worth the money. 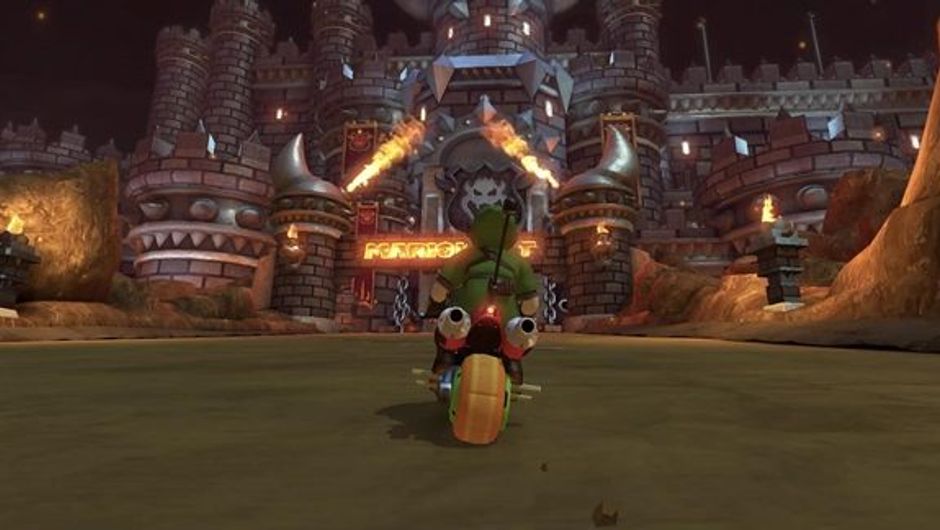 The original Wii U version was clearly built from the ground up utilising the hardware of the console. This Switch adaptation will undoubtedly provide you many hours of solo or multiplayer fun.

Need for Speed Unbound: How to get the BMW M3 GTR?

Need for Speed Unbound: How to get the BMW M3 GTR?

The legendary BMW M3 GTR with blue decals is indeed in Need for Speed unbound. Here's how to get it.

The fan-made remake of Need for Speed Underground is shaping up quite nicely.

Gran Turismo 7 could be the next PlayStation exclusive to release on PC, according to the series creator Kazunori Yamauchi.

Need for Speed: Unbound PC requirements are now available, offering players a glimpse of what they can expect in regards to their rig's power.

EA still seems to be in the "don't accept criticism and just mock the players" camp as the promotion campaign for Need For Speed Unbound apparently included mocking a fan that wasn't satisfied with preorder shenanigans.

Need for Speed Unbound's soundtrack will feature over 70 songs from artists like A$AP Rocky, Brodinski, SCH, Lous and the Yakuza among others.