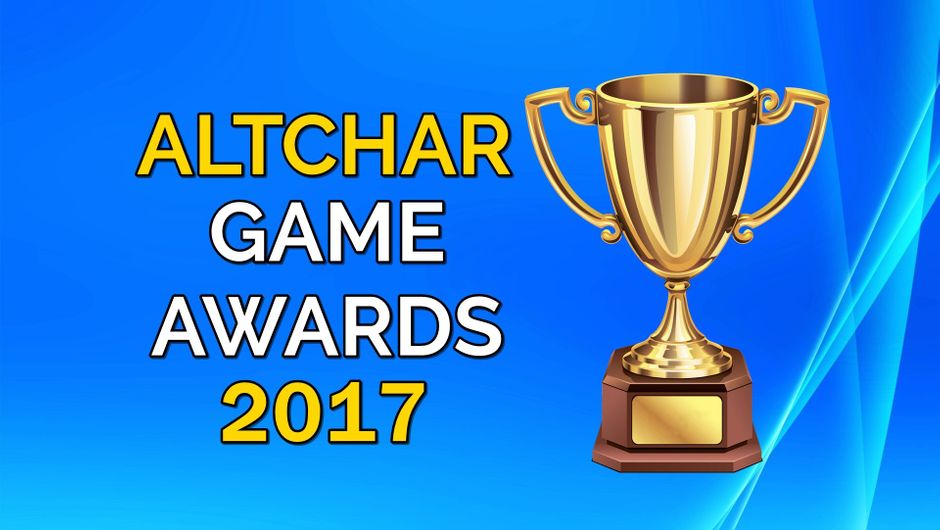 As we say goodbye to year 2017, we look back at some of the finest gaming moments it presented us with. Since we at AltChar are a very charitable bunch, we decided to give a fitting award to every game we deemed worthy.

Well, 2017 is over which means that we are contractually obliged to do an awards video, but the terms and conditions don’t state what awards we need to do, making us be very spoiled for choice. So let's begin!

Disappointment of the Year

Over Christmas an AltChar Destiny-head spent time playing the original game with one of their nephews, a Kinderguardian nudging towards the peak 400 light level. With a year of play under their belt, the young’un was wondering if there was much left to do or progress to make.

A quick look at the assortment of weaponry, armour, and haphazard character build prompted assurances there was light years to go before mastery: honing character and gear build to allow maximum use of space superpowers and weaponry, the objective of a T12 build, god roll guns, the art of armour perk switching, and judicious use of the character skill tree alongside strike modifiers and exotics. Only then will you be a master, young Guardian.

It’s the promising box of chocolates you open, and find there’s only one tray - and your favourites are gone. The Star Wars Director’s Cut that trims the light saber and Force action for more trade negotiations, and misses out Darth Vader altogether. The roast dinner with not enough meat and a surfeit of vegetarian stuffing - doesn’t matter if the cutlery is shiner. We just expected more of the good stuff.

Destiny might not have been perfect, but it felt handmade by someone who loved it. Destiny 2 feels produced to order.

Hardware Gimmick of the Year

There is no contenders to this award, it’s the Nintendo Switch with its JoyCons. For over 10 years now, Nintendo has been pushing the motion controls to try to motivate us to get off the sofa and move around. Heck, they were trying it on the original Nintendo with the Power Pad released in 1986.

But in the year 2017 they are still at it with the JoyCon’s accelerometer and gyroscope to give the Switch Wii-like controls without the need for a sensor bar. Thankfully, they didn’t hamfist this into Breath of the Wild, but they did try it with Mario Odyssey and the tech demo that is 1-2 Switch.

So JoyCons get the "Hardware Gimmick of the Year Award".

We need to admit it. There are some games that people just like to look hipster cool and intellectual smart. And Rime this year wins our "Indie Title To Make You Look Smart award".

Rime is a third-person puzzle-adventure game where you play as a young boy that has washed ashore on an abandoned island. The game is very Ico inspired in limited gameplay such as run, climb, push, pull and carry objects. The puzzle mechanic is powered by the boys ability to shout and sing at statues to open doors.

It features a glorious minimalist cell-shaded art style. It wants to be treated as a serious piece of art in the vein of Journey but just falls flat.

The reason why it got an average score from multiple publications is not because it’s a bad game. It’s because they just don’t understand art, poetry, meaning, subtext, beauty and all them other pretentious things.

Now go off and play Rime, and try to pick up a partner in the self-help section of your local bookshop.

Hideo Kojima Award for Messed Up Content of the Year

We could have given any of the walking simulators released this year the Pretentious Indie Game Award. But the winner for the "Hideo Kojima Award for Messed Up Content of the Year" must go to What Remains of Edith Finch.

To be clear, if you haven’t play What Remains of Edith Finch, you should. Take some time, say four hours, and play the game in one go. It’s a great experience that tells a dreamy story of what happened to a family that hasn’t been this cursed since Edgar Allen Poe died.

You play as Edith Finch as she returns to her isolated and architecturally eclectic family home following the death of her mother. You have a single key and are tasked with exploring the house to discover how all the family members died. Each family member has their own locked room that you must access, which contains a slight mini-game where you re-enact their death.

The game will genuinely shock you, leaving a mark on your psyche that will linger in the coming days. Why, you ask? You play as a baby as it drowns in the bath... Hideo Kojima would be proud.

Squad Game of the Year

It took a while, but publishers marketing companies finally figured out that gamers play games with other gamers! And based on multiplayer servers on day one, seems like developers are yet to get the memo.

Well, the best game to play with your Squad this year had to be PlayerUnknown’s Battlegrounds.

It’s a game that involves an exceptional amount of teamwork and skill. But at its core, it’s just fun. Sure you can take it seriously, or you can just run around with your friends and have some good times going to spawn island.

Mario Wii U for Best Water

Sure the Switch might not be doing Crysis level of water graphics, but Nintendo know how to work best with their hardware.

Peter Molyneux Award for Lie of the Year

Being a gamer you are used to a lot of lies. Especially from Peter Molyneux. But for now, he has retreated into a hole somewhere making his next groundbreaking games.

But the lie this year goes to Cayde 6 in the . “A ton” that he talks about - meh maybe, but the “loot” needs fixing so it feels like actual loot worth getting.

If one game gets our "Selling Nostalgia Award" this year it has to be Sonic Mania. We reviewed the game earlier in the year, and we did enjoy it. But, at the end of the day, we all bought a game that should have been released in 1997. But if it had been we would all be moaning about the lack of innovation.

The game was too safe.

For all the games that get announced, released or saunter in Development Hell, there are games that flat out get cancelled. These games fill us with the wonder of “what ifs” and will fill out a YouTube video in a few years titled “Top 5 Cancelled Games". Trust us. It’s coming. So the "Silent Hills Cancelled Game" award this year goes to Scalebound.

Scalebound was to be an Xbox One and Windows PC exclusive by Japanese Developers PlatinumGames. The announcement and development of this game was definitely a source of interest. Japanese developers and gamers have always had a sceptical eye towards Microsoft and Americans as whole.

It was officially announced at Microsoft Studios' press conference at E3 2014 with a cinematic trailer and, as the years progressed, more details and trailers were released. It was set to be released worldwide for the Xbox One in late 2016 but was later delayed to 2017 and then cancelled in January.

Essentially, the game was How to Train Your Dragon. It’s a shame that it got cancelled as it looked to be a graphical achievement for the Xbox One.

Best Game to Subdue Children With

Sometimes you just need to keep a child quiet. So this year Mario Kart 8 Deluxe wins our award for "Best Game to Subdue A Small Child With". Mario Kart walks the great tightrope of between casual and hardcore and can get your kid's hand-eye coordination skills on lock.

The great graphics and sounds will capture a child's attention like watching Thomas The Tank Engine for the 30th time that day. And the main benefit for children is that they are not able to communicate with other players aside from a predetermined list of messages - ensuring that your child does not become a jaded gamer running their own YouTube channel until they become a teenager.

Game of The Year

It really only comes down to two games this year: Legend of Zelda: Breath of the Wild or Super Mario Odyssey. Well AltChar have been debating this back and forth and can’t be bothered to make a decision so let’s get Super Smash Bros decide, because whichever one we pick is going to be wrong.

Watch how this battle unfolds in our newest video right through .

Fall Guys' Blunderdome is about to become home to some special new features. The upcoming season will bring new and improved Rounds, costumes and Rewards.

Motion Twin released the Everyone is Here update for Dead Cells, opening the doors for several protagonists of other fantastic indies.

Innersloth's first-evet Cosmicube partnership is now live in Among Us. The devs have partnered with Riot to bring characters from Arcane to the Cosmicube.