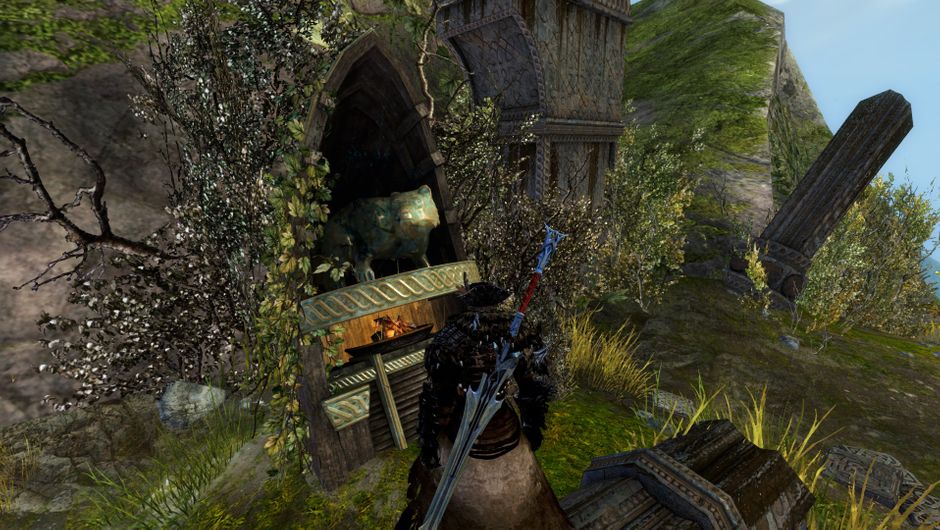 Arena of the Wolverine is not a particularly hard Guild Wars 2 activity but it's certainly annoying. Here are a few tips to get through it and pick that gold medal to boot.

While not as easy as the Flight of the Eagle Spirit, Arena of the Wolverine is still a rather forgiving activity, which you can see from the video guide embedded below.

Anyway, the activity is pretty much a DPS check so bring your best damage pumping build and slap the Wolverine with it. As long as you have a competent build, the creature shouldn't be able to stop you from getting gold but if you want to compete on the leaderboard or have low damage output, some of the following tips might be useful.

The first tip is to lure the spirit away from the entry point. This step is here to make sure the game doesn't prompt to you to exit the instance all the time.

Another important thing to keep in mind is the Wolverine's signature mechanic - it will absorb some spiritual energy and then shoot it out. If this hits you, it will cause a stun, slow and chill. To avoid this attack, it's best to remember it happens in regular 10-second intervals and the AoE stun is always preceded by an animation where three spirits are absorbed into Wolverine.

You can either use the regular dodge or abilities like the Warrior's Whirlwind Attack or Thief's Pistol Whip to evade the shockwaves. If you are using an evade that also changes your position, it would be wise to move towards Wolverine during the dodge. If you evade backwards, the slow-moving shockwave will eventually catch up and still hit you.

In case you are unable to dodge these shockwaves, it's a good idea to bring spammable condition removers. Use them to cleanse Slow and Chill caused by the shockwave.

The third tip is connected to Wolverine's ability that functions similarly to the Elementalist's Static Field. These are the clearly visible areas marked by blue circles so avoid their walls as they will also micro-stun you.

If you are just here for the gold medal, even if you don't adhere the aforementioned tips, you should be able to get the reward as long as you keep your DPS rotation going. Keep in mind that in the video I didn't have Berserker gear, back item, amulet, rings or accessories which dropped my damage output heavily. I didn't dodge the shockwaves either and still got to the reward with over 22 seconds to spare.

In other words - with enough damage output you can just brute force this activity's gold reward but if you are looking to climb the leaderboard, you need to adjust to Wolverine's mechanics.

Following the massive backlash over the proposed balance changes in Guild Wars 2, ArenaNet declared they would provide context and pretty much proceed as planned.

ArenaNet is taking a dubious balance patch out to live servers next week, making the Warriors into glorified buff bots, while completely missing the mark with crit buffs.

ArenaNet announced they are about to do some funky things with more challenging content in Guild Wars 2, with the changes being likely to meet good reception.

Dragon Bash is coming back to Guild Wars 2 soon

Dragon Bash is coming back to Guild Wars 2 soon

ArenaNet provided a heads up for the Guild Wars 2 players as Dragon Bash is coming around once again, not so long after the time of publishing.

Sky Pirates is coming back to Guild Wars 2 next week

Sky Pirates is coming back to Guild Wars 2 next week

Guilld Wars 2 players will have the opportunity to relive some of the older stories in the game when Lion's Arch comes back in its full glory.

The June update is just around the corner, and here are the things we can see changed in the game once it goes live. These are geared to improve quality of life, with the balance update coming later on.

Albion Online Will Release Two New Vanity Sets at Once

Albion Online Will Release Two New Vanity Sets at Once

It seems that Into the Fray expansion brought more changes to Albion Online, than those tied to in-game mechanics. Now, the Vanity Sets are released in pars.