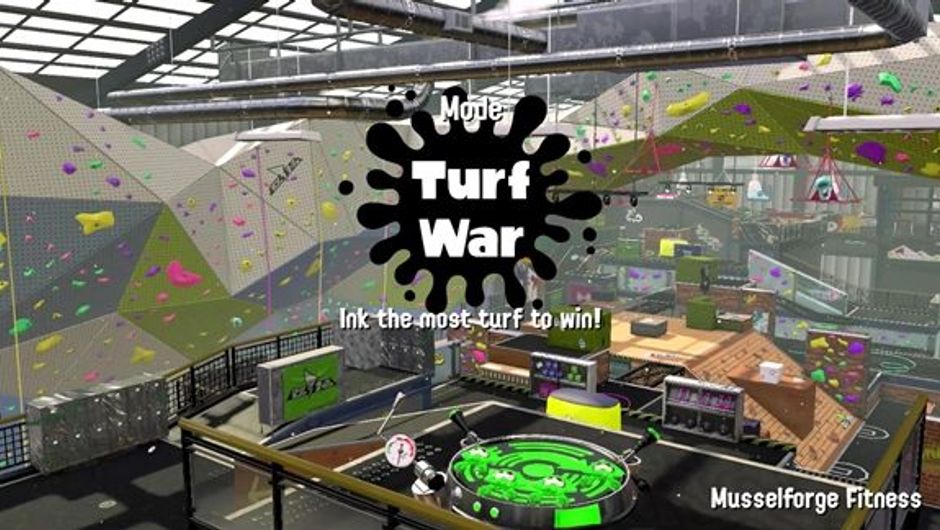 Splatoon 2 is now available for the Nintendo Switch. In a world of Call of Duty and Battlefield, can a third person shooter succeed? Also, is this a game that utilises the new console or just a standard sequel? Read on or watch our video review to see what we had to say.

It’s always best to wait a month to do a review of an online focused game. History has taught us that these are prone to problems with servers, bugs and glitches. Splatoon 2 has been out for just under a month now, and we're glad to say there's been little problems with the online experience. We have had the occasional wait time for lobbies but not what we experienced in Bomberman. 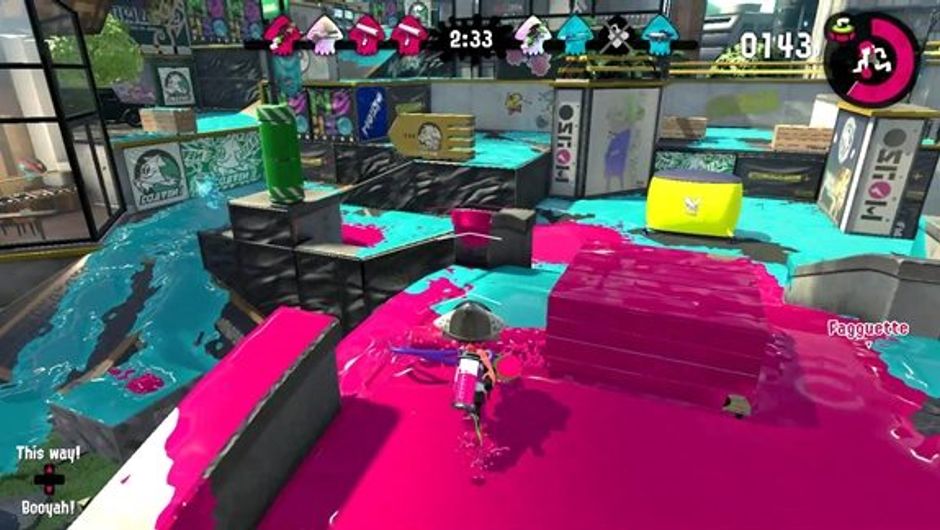 So the Splatoon 2 experience online has not changed - great. The problem is that not much has changed in the sequel. Don’t get us wrong, Splatoon 2 is a great game and, if it’s your first time playing, you are going to have a blast. But if you put as many hours into the game as on the Wii U, you are going to be disappointed in the lack of improvement. Let’s get into it.

Multiplayer is where this game is to be played and it provides a truly fun experience. Players use an arsenal of primary weapons and grenades, as well as temporary special weapons to splatter ink around an arena. Player characters are called Inklings who have the ability to change between a humanoid "kid" and a squid-like form. Transforming into a squid allows the player to swim through ink of their own colour which is much faster than attempting to traverse it in human form to refill their ink guns.

There are two main game modes: Regular Battle and Ranked Battle which is locked until level 10. In Regular Battle you play Turf War, a 4v4 game where each team is assigned its own ink colour. Teams must attempt to splatter their ink around the arena avoiding enemy shots along the way. After the time runs out, the judge calculates what percentage of the arena is covered in each team's ink. The team with the highest percentage of coverage wins the round.

The Ranked Battle mode requires a higher level of strategy compared to Turf War, and wins and losses are counted toward players' ranks. Players begin with a 'C-' rating, but are able to improve and regress based on how well they perform.

League Battle is a new online mode, in which teams of two or four battle other teams to gain points in a two hour period.

Success in all of these modes will grant you coins that you can use to buy different shoes, hats, and clothes for your inkling that provide stat increases. Or to just simply dress them up. Importantly, you can use these to buy different weapons. They are the standard variety of a shooter game: heavy machineguns, assault rifles, handguns, sniper and melee. However, the focus of the game is not eliminating players but covering the map, so they work differently in their functionality and their style. 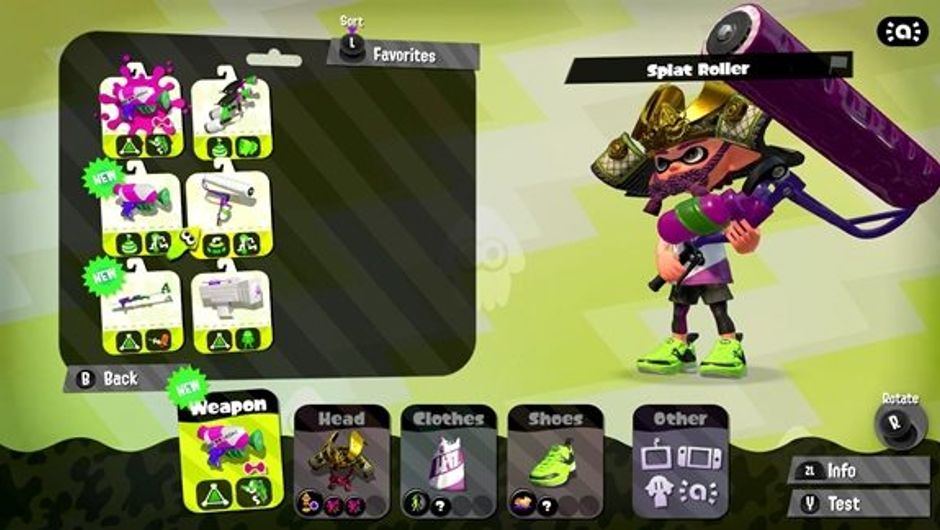 For example, the melee weapons are paintbrushes and rollers which allow you to cover areas quickly and smash opponents' faces. Coordinating what weapon and what role players on your team will make is the key to success. If all four of you pick the sniping weapon, it will allow you to take out enemies from range, but you will not cover a lot of the map. Which brings us nicely to a major complaint about the game - you can’t change weapons in a lobby. This problem has carried over from the original game. To change the weapon you have to come out of the lobby, select the weapon and rejoin. It might not sound like much, but it gets really irritating.

We do a get a new mode in Salmon Run - a kind of horde mode. Players must collect Power Eggs and Golden Eggs by defeating Salmonids in order to complete rounds. Then they must bring enough Golden Eggs to the goal until the flag is all the way up to complete the round. Inklings in this mode are equipped with special gear. Salmon Run can be played via local multiplayer, or online during certain time slots. 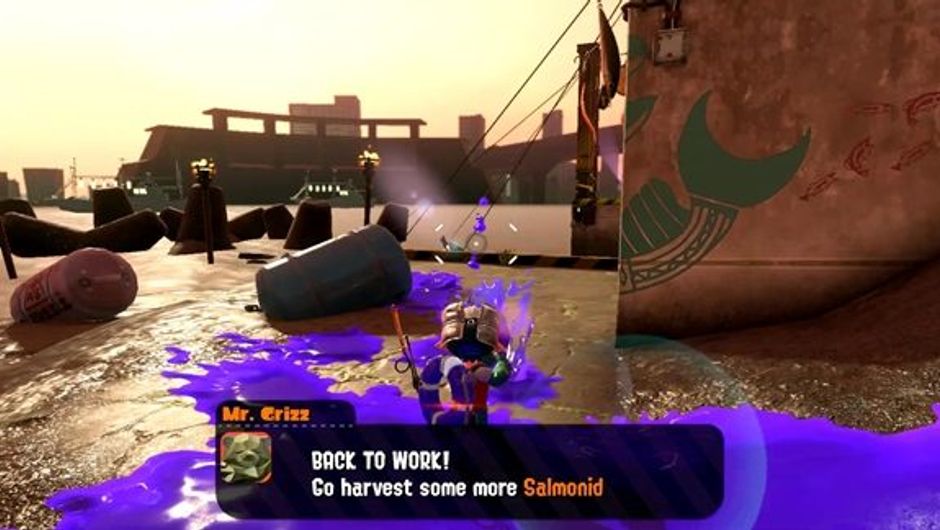 Playing a Nintendo game online is like being under a police state run by a mustached leader, you can have a lot of fun in Splatoon 2, but only playing the two maps they decide are available at any given time.

Also, want to talk to your teammates, in a shooter that is not about individual victory or K/D, but team play? You wish! Doing team chat in Splatoon 2 is a terrible system. Here are the steps you need to take if you want to engage in a chat with your teammates: 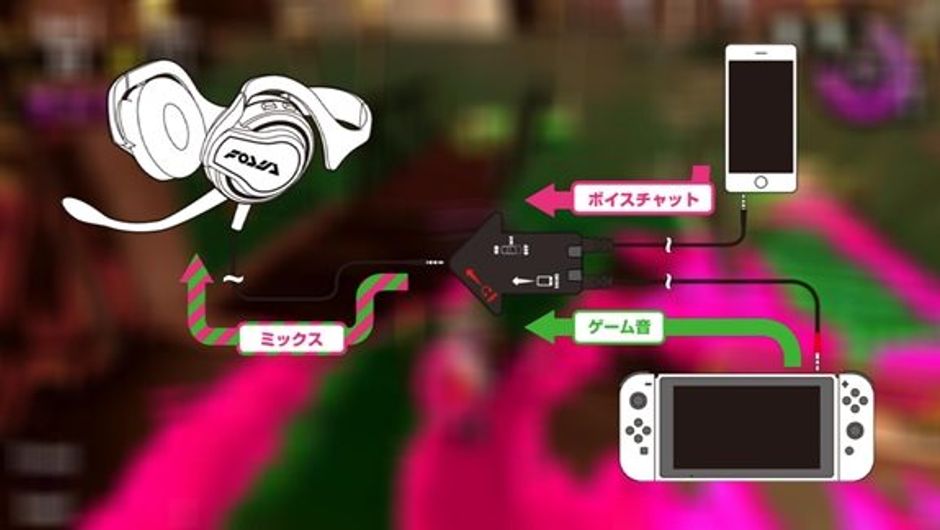 It just isn’t worth it. Here’s our guide:

Let’s carry on the moaning by talking about the controls. The controls in the game are very functional, but they have moved the jump button around, so Wii U players will have to reconfigure their muscle memory. There is no real difference in playing in docked or portable mode when using JoyCons, but we have to recommend the Pro Controller for this game. It’s just so much better.

When you immediately start the game, motion controls are on. Continuing Nintendo’s crusade that motion controls are the best way to play games. We, personally, do not like these, especially in portable mode, as we keep bumping into people on the train. That being said however, there is a benefit to the motion controls and many people speak highly of it to improve your game. 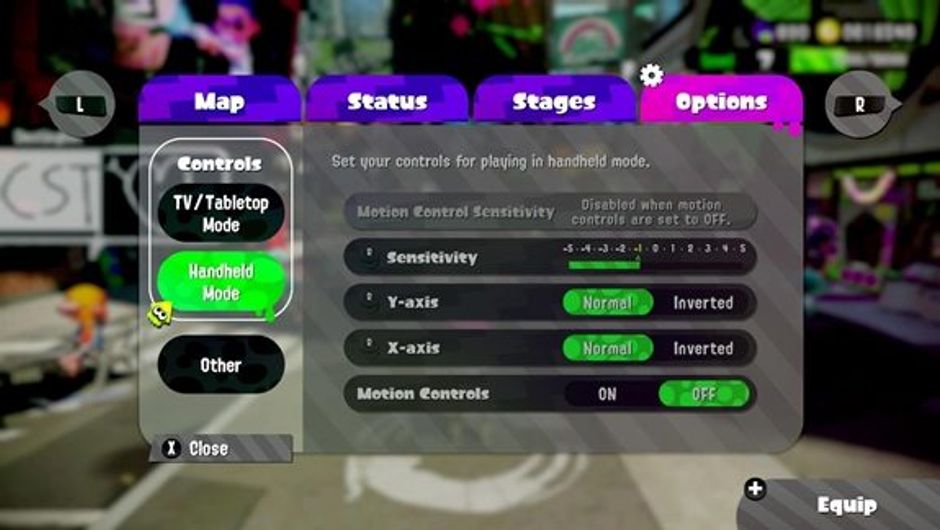 The criticism we have is that the motion controls only work left to right. To look up and down you still have to use the right analogue stick. It’s a weird fluid of motion you have to develop to make it work, but once you get it, you can’t go back.

Another problem is that you can’t change controls in the middle of a game or in a lobby. So it’s back to the start to change the sensitivity or the motion controls. That’s one of the biggest problems with online - it doesn't give us a streamlined approach.

The single player mode is called Hero mode and is a continuation from the original game. It’s more fleshed out than the original and the difficulty level is increased. You must rescue the great Zapfish which has been captured by the evil Octarians. It’s an acceptable campaign and furthers the lore and world of Splatoon but nothing further. You are not getting a Destiny experience here. 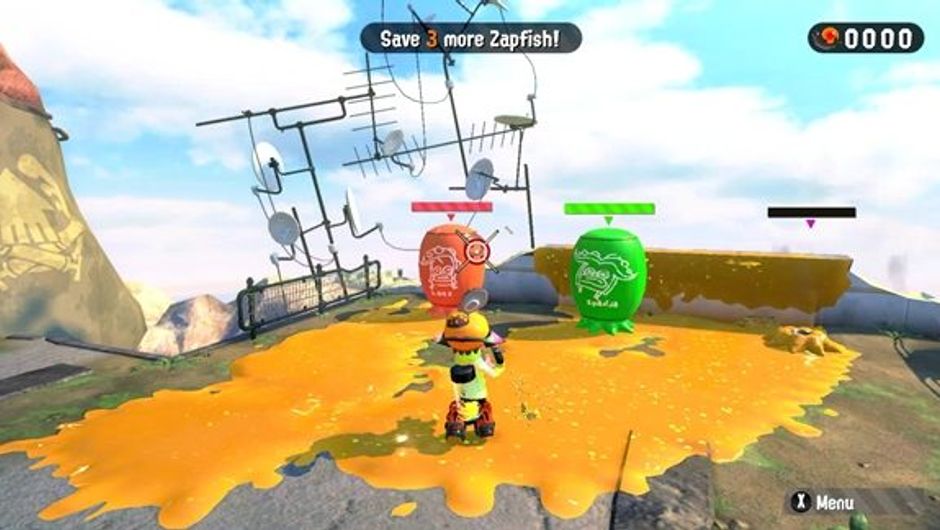 There are more collectibles to get this time around that improve the experience. The lure of a 100% completion is tantalising as it gives you greater upgrades for multiplayer mode.

In a world of gritty grey and brown shooters, it is so refreshing to have a game that is so bright and colourful. The aesthetic of the game is similar to the Jet Set Radio franchise with its Japanese hip-hop style. We talked about this in our and we are going to call it "Neo-Nintendo".

While most online shooters comprise of big men wearing armour and military fatigues, it's wonderful to play as a boy or girl wearing a snorkel set while running around with a giant paintbrush. However, the game doesn’t really show off the hardware of the Switch when compared to the Wii U. We've done a full video on this that you can watch . 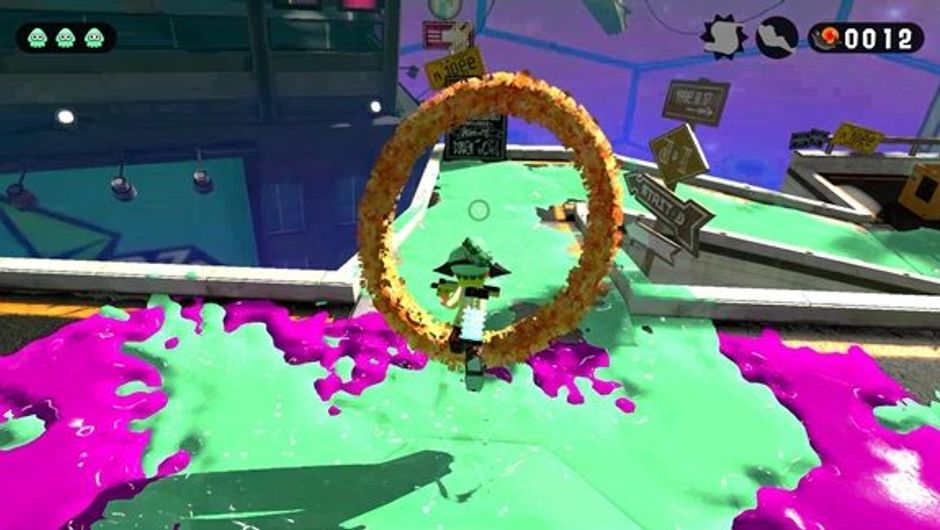 The game has a J Pop soundtrack that is very catchy and we found ourselves singing along as we navigated the maps.

As this is a Nintendo game, we have to talk about the Amiibo support, and yet again, as with the other Switch games, it’s a bit lacking. You can use the original Wii U Splatoon Amiibos to unlock new gear, and you can do the same with the new sets. The gear is slightly better, as it allows more slots for upgrades but that’s really it. In the Wii U game, the Amiibos could be used to unlock new loading screen mini games, but they are gone in Splatoon 2. 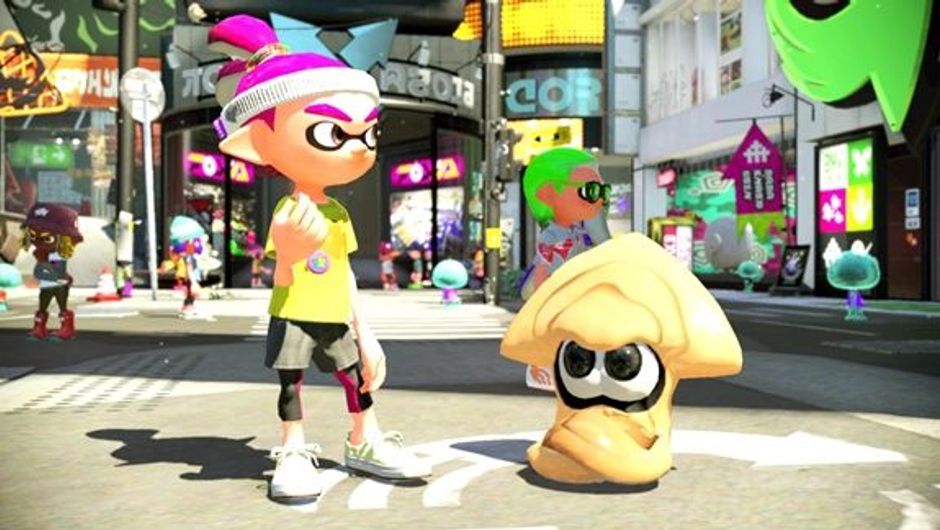 Why are they gone though? They were one of the best parts about the game. Sure they were simple things that we can’t show you any captured footage of because you can’t capture the Wii U screen, but they were awesome - they relieved boredom between matches.

But still, with the rest of the Amiibos in your collection, if they aren't Splatoon, they’re not doing anything but collecting dust.

Although it may seem like we have spent this review slagging off Splatoon 2 like a bunch of hurt fanboys, at the core, it’s a great game. We recommended it to all of our friends and everyone that has bought it, loves it. The issue we have with the game is that it’s a sequel and as such, we can’t fully judge it as an entity in its own right.

The problem with this game is that it feels like a default sequel on the Wii U, something you would expect with Call of Duty - new maps, prettier visuals and new weapons. Splatoon 2 doesn’t feel like the Splatoon version for the Nintendo Switch, like Nintendo have done historically with Mario Kart, Zelda, Metroid and Mario. 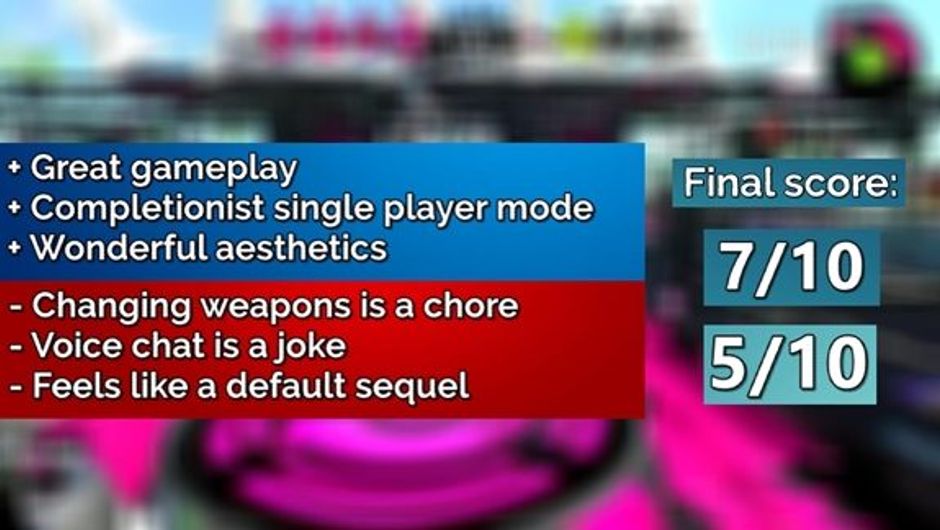 The game feels and plays like the old Wii U version with a bit more razzle dazzle. And, yes, this is a good thing, why change what’s broken, right? But Splatoon 2 is More like Splatoon Remastered, and when you label a game "2", you better come with a better game. As a game in its own right Splatoon 2 gets 7/10. As a sequel it gets 5/10.

Hi-Rez released a teaser trailer with a short cinematic that showcases the gist of the upcoming Paladins champion but her actual skillset has already leaked.

Ukraine has received a lot of support since the start of the war but Fortnite appears to be breaking some records as Epic Games reached a huge fundraising milestone.

Epic Games have officially decided to keep the Zero Build mode in Fortnite but those who prefer the classic experience will not be left behind either.

A PSVR2 exclusive mode in Call of Duty Modern Warfare 2 could be revealed at the upcoming State of Play on June 2.

Destiny 2: Dates when Season 17 ornaments will be sold for Bright Dust

Destiny 2: Dates when Season 17 ornaments will be sold for Bright Dust

Bungie came up with yet another awesome ornament set for all classes in Season 17 of Destiny 2 and here are the weeks when you can pick them up for Bright Dust.