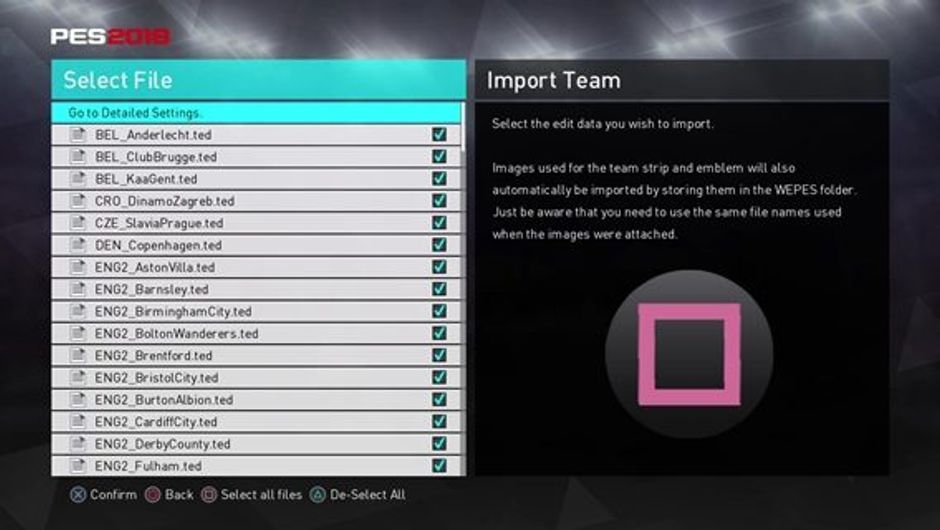 Hit the square button to add all teams at once.

PES 2018 is truly a fantastic game, but it can be even better. Here's our guide on how to install all the official team and player names, kits, competition emblems and more.

Every year a new PES game comes out, and every year it has the same problem - few to no licences. However, there's a workaround for this and it's very easy to do if you have a PS4. If you have an Xbox One though, that's kind of a bummer because the method that we'll show you is exclusive to PlayStation 4. PC players of course have it best, as usual. They can just download any custom option file or mod from the internet, install it, and they're good to go. On the PS4 though, it's a bit trickier than that, but we're going to show you how it's done.

The first thing you want to do is download from the awesome gents over at . After you download the file, simply extract it to a USB stick. Make sure that you do not rename or delete any files from the WEPES folder. Also, the USB stick needs to be in FAT32 format, otherwise the PS4 won't be able to read it.

AltChar Make sure the USB stick is in FAT32 format. 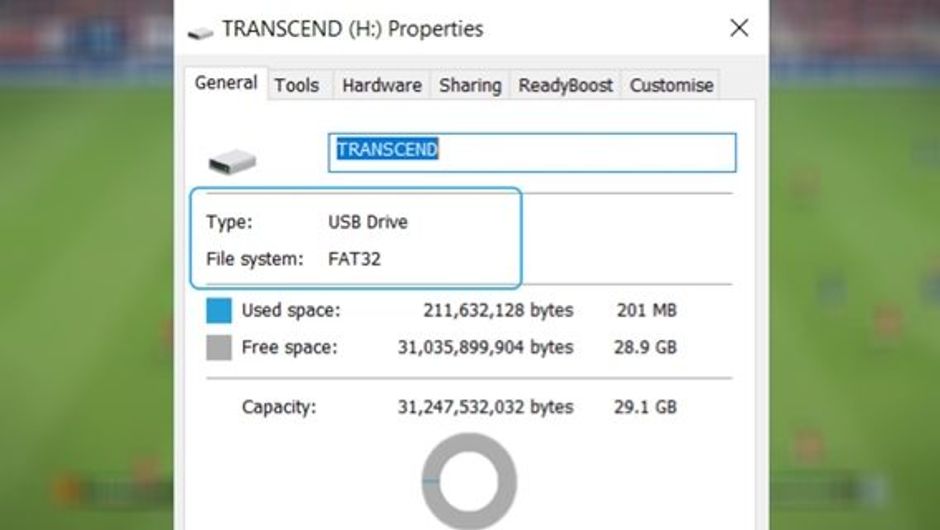 Now let's move on to what you have to do on the PS4. First, open Application Settings, and delete any Edit Data under PES 2018, that you possibly might have. In case you've never made any changes to the game, you can skip this step. 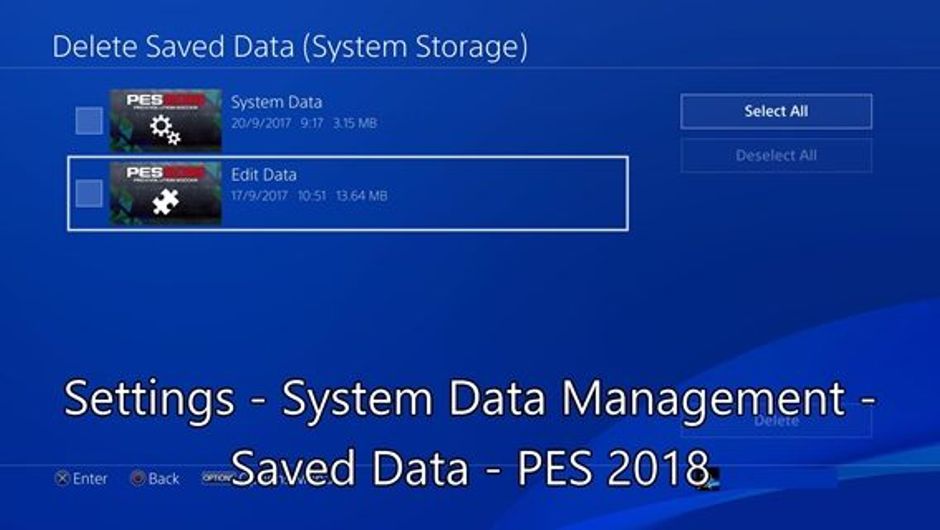 Then start up the game, and go to Extras and then Edit. Here, you will get a screen asking you to create Edit Data. Hit yes and then just wait until the Edit Data is created. 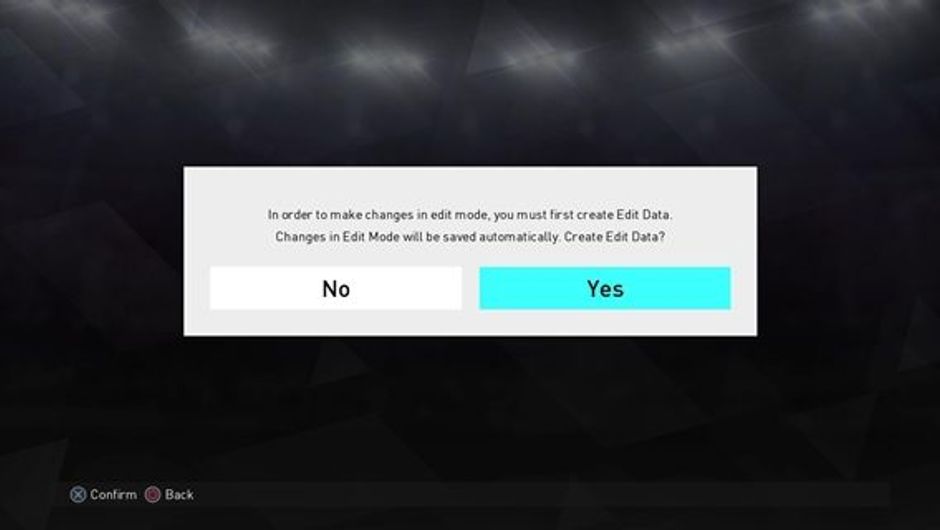 Once that is done, go to Data Management and then go to Import/Export - and this is where all the magic happens. Hit Import Team, and then select all files by pressing the square button and then hit next. This will take you to a screen with some detailed settings. Make sure to only select the option of overwriting image files and leave the other boxes unticked. Then just hit okay and wait until all the team bins are imported. This process can take up to ten to twenty minutes, depending on the speed of your USB, so just be patient and have some tea in the meantime.

Konami Hit the square button to add all teams at once.

When that is done, hit the circle button to go back to the Data Management screen because the game is known to crash at certain points when importing all the teams. So, just to be on the safe side, save any changes you make every now and then, because you don't want to start from scratch in case the game crashes.

If you want to import the competition emblems simply go to Import Competition, select all files and tick the overwriting image files option again, and that's it. You now have every single competition fully licensed. Again, after importing the competition emblems, make sure to save your progress - better safe than sorry. Note that this patch works in both offline and online modes, so say goodbye to Man Red and Man Blue forever. 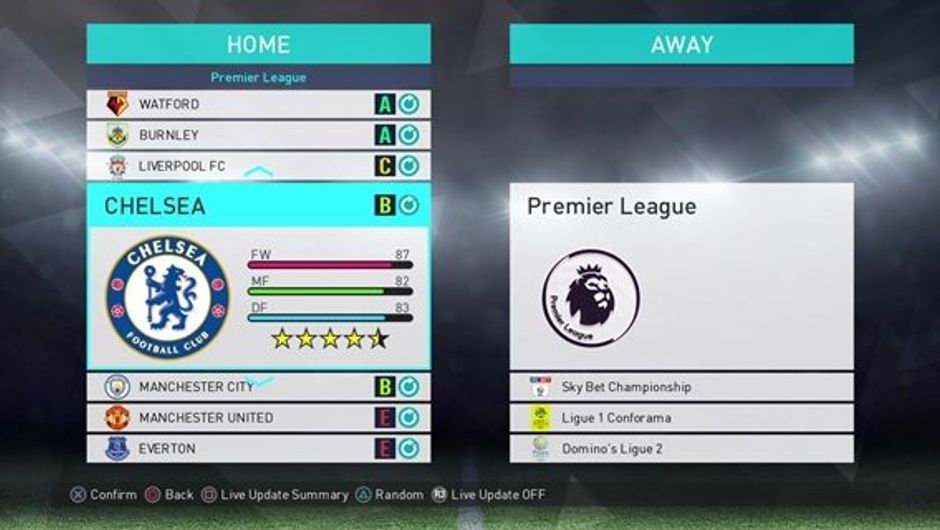 Take a look at our  for a visual guide on how to install the custom option file properly, in case you got lost somewhere along the way.

Rainbow Six Siege is free till December 6 and that has attracted a lot of players. More players mean more problems and this article will give you the fix to the issue of not being able to invite your friends to your party.

If you thought that keeping a group of people alive is the only thing you have to do, you have another thing coming, the dog shows up halfway through the story and saving it will grant you an achievement, here's how to do it.