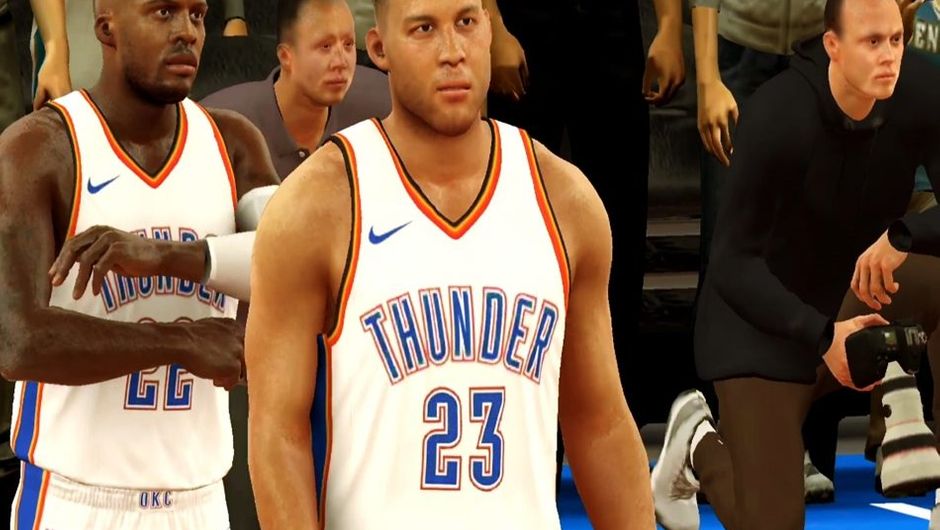 2K Sports have put out a free mobile version of their renowned NBA 2K series, aptly called NBA 2K Mobile Basketball. It is completely free to play and is currently available on iOS devices only with pre-registrations open for Android users.

NBA 2K Mobile Basketball is a game that sees players collect NBA player cards to build their fantasy team. This is known as MyTeam and it is essentially the game's core feature. Once you create your lineup of players, that will be the roster that you'll be using in each and every one of your matches, regardless of the mode you're playing.

The game is centered around two main modes called Seasons and Leagues. Seasons is the standard mode where you play a fixed number of matches against the CPU. There's a number of rewards that can be earned by finishing a season, such as a new player card, a new equipment piece that you can add to your existing player to boost his stats, or a collectible that you can use in the game's store.

Leagues is the mode where you take on other players online. This mode is based on a ranked system which means that the game will pair you up against opponents whose team score is similar to yours, meaning that you will never face an all-star team if you have a bunch of rookies or regular players on your roster. Both the matchmaking and loading times are impressively quick, so you'll be in and out of online matches in no time.

Another mode that you can play, though not as big as Seasons and Leagues, is called Drills. As its name suggests, this is a mode where you can practice with a specific player on your team in order to increase his abilities. This mode is updated on a daily basis, so you'll be able to work on a different position on your roster every day.

Completing these drills, as well as being successful in other modes, will reward you with draft picks. This is like a lottery mini-game where you select a face-down card which can be either a brand new player, a collectible or an attribute boost.

2K Sports We got Kyle Kuzma in our Draft Pick. Not bad at all! 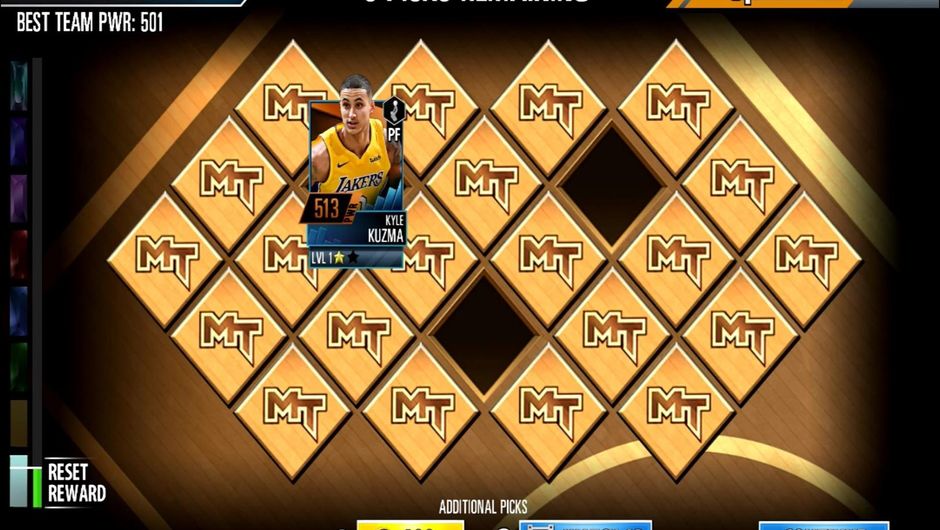 Now, when it comes to gameplay itself, it's a pretty straightforward affair. On the left hand side of the screen, you have a virtual analogue stick that allows you to move your player just like you would with a regular controller. If you're on offense, the right hand side will present you with two buttons: Pass and Shoot. In order to pass the ball, you just press the pass button and the player you're controlling will instantly pass the ball to the player he's facing at that moment.

The shooting system is identical to that of NBA 2K games on consoles and PC. You hold the shoot button until the shot meter goes all the way up and you release it before it starts going down, otherwise you will miss your shot. If you've played NBA 2K19 or 18, you will be familiar with the way this system works. It's all about perfect timing and knowing when to take your shots.

2K Sports If you could shoot well in NBA 2K19 and its predecessors, you'll have no problems in this game. 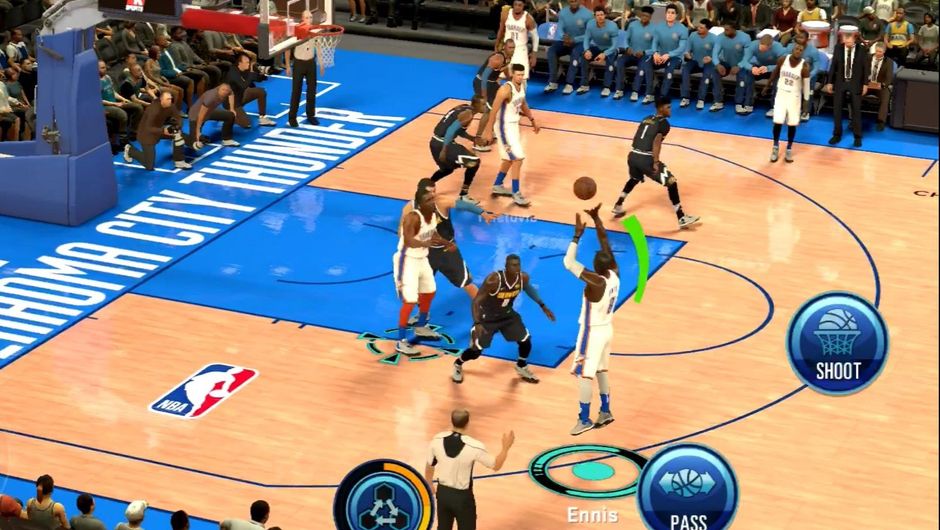 If you're on defense, you will see three buttons on the right hand side: Steal, Defend and Block. To guard the opposing player, you need to press and hold the defend button and then swipe to the left to steal the ball or swipe up to try and block a shot. Be careful though, spamming the steal button too much will result in a reach-in foul, so correct timing is of crucial importance here as well.

However, if you don't feel like worrying about defense too much, you can enable the Auto mode by tapping on the button in the upper right corner of the screen. This will make your players play defense automatically, and while it will make your life much easier, we don't recommend that you play the game like this. It just takes away from the overall feel that you'd normally get from this very sweet basketball title. So keep it manual and get your game on.

Right between the movement and offense/defense buttons, there's a button in the center of the screen that you can press when its meter is filled all the way to the top. This is known as the Boost button, and it allows your players to play significantly better for a set amount of time. It basically turns all your players into superstars, so this button is best used in clutch situations that can help you win the game, or you can just go berserk and dunk the ball to show off a little.

2K Sports The boost button will make your players knock down three-point shots with ease. 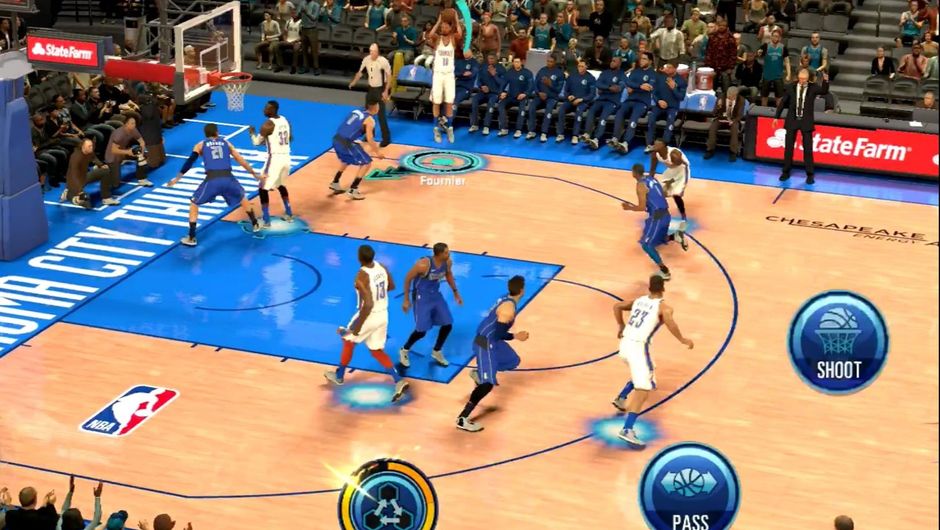 Matches are played in two halves, as opposed to the standard four quarters. Each half is two minutes long, so games go by fairly quick. The game features over 400 NBA players and its on-court action and arenas are authentic which creates an immersive sense of NBA atmosphere that's downright impressive, especially for a mobile title.

2K claimed that NBA 2K Mobile Basketball would feature console-like graphics, and boy were they right on their money! The game just looks downright gorgeous. So much so, that we would genuinely have a hard time telling it apart from the console version in certain bits. It runs buttery smooth and very much looks the part. We were promised an amazing looking basketball game for mobile, and 2K delivered. 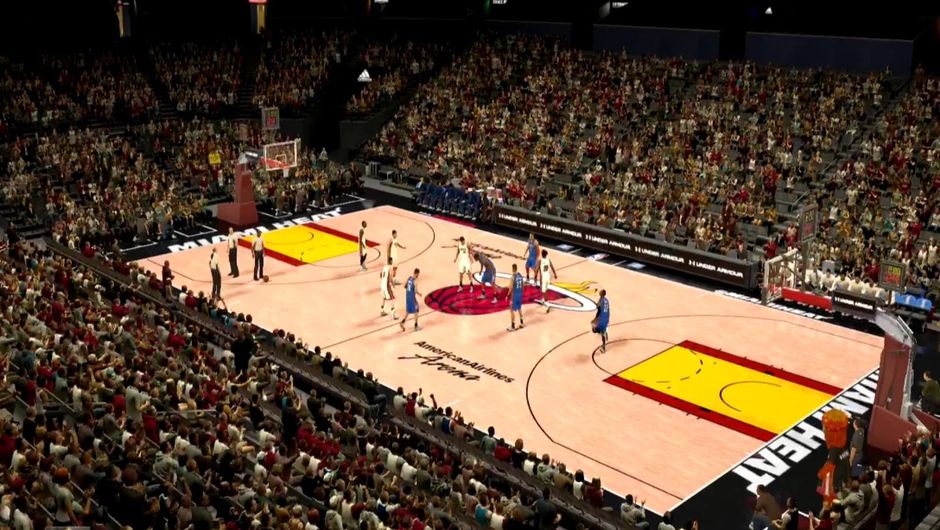 Being a free title, the game features an in-game store where players can purchase packs that contain many different items. These range from player cards and equipment to collectibles that you can use elsewhere in the game. We purchased a pack for the sake of this review and we got some star players that will really help our team out, especially in the early seasons.

These packs are bought with the in-game currency, which can be earned by playing the game and completing events, or purchased with real-life money.

2K Sports The in-game store offers a number of different packs for purchase. 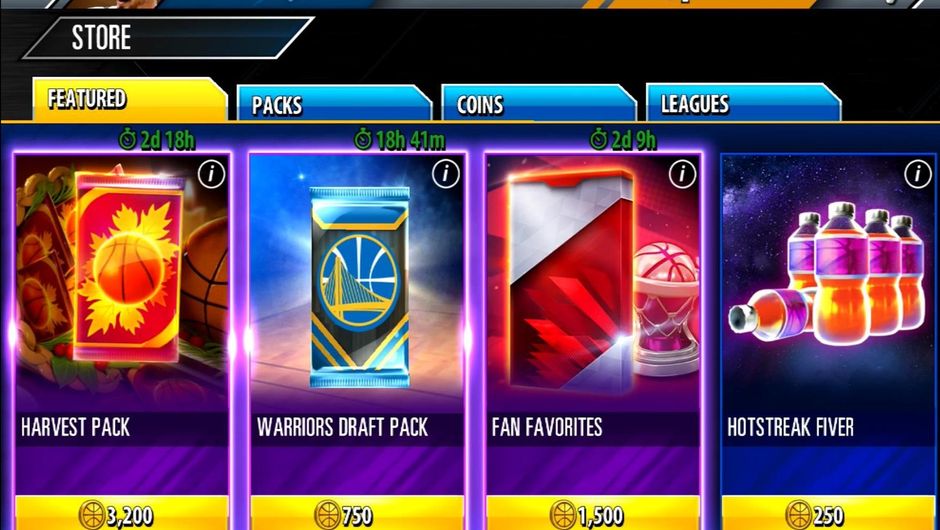 NBA 2K Mobile Basketball is the perfect game for all basketball fans. If you have an iOS device, we strongly recommend that you download this game and give it a try. And if you're on Android, go pre-register for it at the Google Play Store. It is completely free to play, so you really have nothing to lose.

Be wary though, you might just fall in love with the game so much that you will end up kissing your phone's battery life goodbye. We at AltChar give NBA 2K Mobile Basketball a well-deserving 9/10.

Niantic has detailed the upcoming Bug Out! event in Pokemon Go where several creatures are making a debut, along with Mega Scizor.