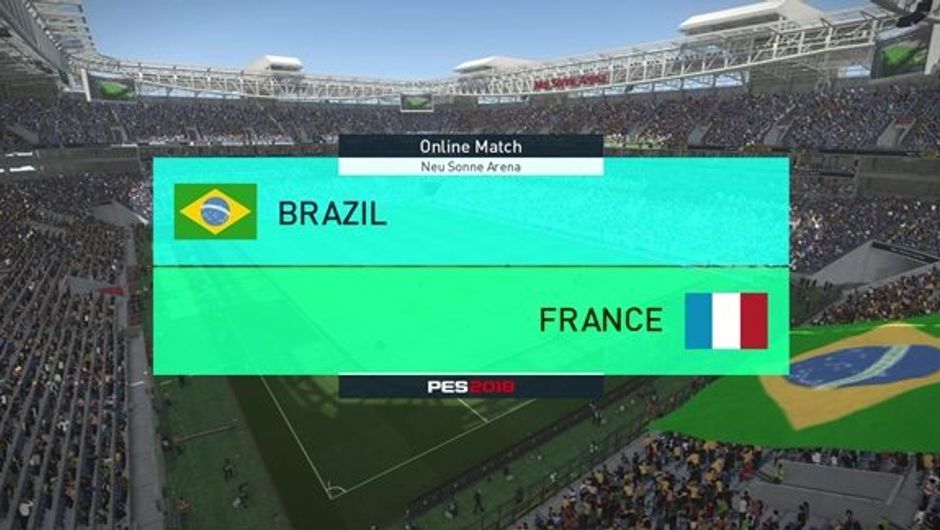 You can only choose between two teams in PES 2018 Online Beta.

PES 2018 Online Beta began a few days ago, and we've been playing it day and night. Could the new iteration of PES be the best football game to date? Check out our video to see what we had to say.

Even though the game doesn't release for another month and a half, Konami have decided to treat their players with an online beta where they can test the online components of PES 2018. Note that this not the official demo of the game - the demo will be out sometime later, most likely in early September.

The beta allows to you play using two teams only - the national teams of Brazil and France. You can choose between two modes of play: quick match - which is a standard online versus match, and online co-op, where you can play a 3v3 match online. Quick match feels great - the game is fluid, there are no lag issues, it's like playing an offline match of good old PES.

Konami You can only choose between two teams in PES 2018 Online Beta.

However, the 3v3 mode is sadly a different story. Not only did it take us a good while to find a match, but even when we finally did, the lag made the game literally unplayable. We hope that this problem will be resolved in the final version of the game, because we'd hate to see such a great feature fail because of Konami's poor servers. Apart from the lag issues in online co-op, we couldn't find any other flaws with the online beta.

Graphics-wise, the game looks absolutely stunning. We've played the game on a PS4 Pro and we were just blown away by how crisp the visuals look. The game runs in native 4k at a steady 60fps. Konami have stated that PES 2015, 16 and 17 were all part of the same production cycle, and that PES 2018 can well be considered a completely new game as it's been reworked from ground up, and we can honestly say that this really shows.

The lighting of the pitch has been completely revamped which makes the game look great, both during day and night matches. Player models now look much more lifelike with the likes of Pogba and Griezmann looking incredible. Replays and set pieces have been overhauled as well, and there were genuinely some parts where we couldn't tell if we were playing a video game or watching a real life football match.

The one thing that PES 2017 had a problem with was the commentary. In our , we said that we'd love to see either a brand new commentary introduced in PES 2018, or an updated version with some new lines at least. While we didn't get exactly get a completely new voice, Konami have added a good number of lines to their pre-existing commentary script, which makes the overall atmosphere of the game a bit more authentic when compared to that of PES 2017. Although the overall presentation of the game is still not on FIFA's level, it's a step in the right direction.

When it comes to the gameplay itself, the game feels much different than its predecessors. PES has always been touted as the the king of pitch - even their slogan is "the pitch is ours" - and that has never been more true than today. The overall pace of the match has been reduced to drastic levels, giving the game an authentic feel of realism. Even with amazing dribblers, such as Neymar, we couldn't make the game a one-man-show like we could in previous versions.

PES 2018 requires you to play strategically, especially in mid-field where basically every action stems from. Long balls are nowhere near as OP as before because of smarter AI, who - for a change - actually play some defense. However, one thing that's not different is how easy it is to tackle your opponent. Tackling your opponent from the back in hopes of not conceding a late-match goal is just as easy as before, so we're still in mercy of our opponent's fair play, or the lack thereof. This is another feature we'd like to see tweaked in the final version of the game.

Konami Tackling your opponent from the back is just as easy as before.

All in all though, we gotta say that we're having incredible fun playing the online beta. It ends on July 31, so you've got another week to get in on the fun, if you haven't already.

Genshin Impact Leaks: Shikanoin Heizou will be a Dendro character

Genshin Impact Leaks: Shikanoin Heizou will be a Dendro character

A recent Genshin Impact leak has revealed that one of the upcoming characters, Shikanoin Heizou, will be the first Dendro character in the game alongside Yaoyao.