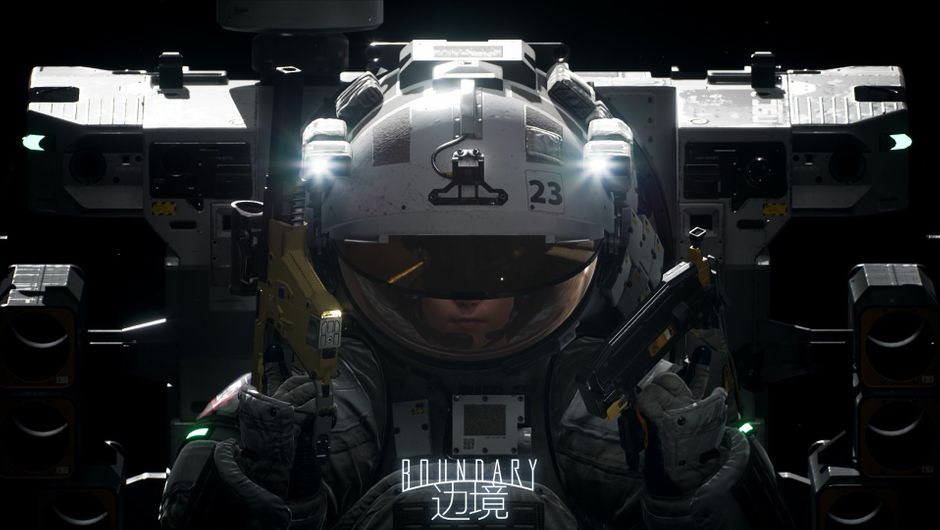 A duel wielding space astronaut? ALL THE YES.

Boundary is an immediately arresting title, with zero-g combat and a highly polished visual aesthetic offering a genuine break from the norm. We interview Frank Mingbo Li, Co-founder and Technical Director at Surgical Scalpels.

It's always a treat to be blindsided by unexpected, welcome ambition; Boundary represents an attempt to shift multiplayer deathmatch into uncharted territory. As a premise, it's undeniably exciting, and with a Beta fast approaching, it won't be long before there's opportunity to check it out.

By subverting predetermined notions of player movement and environmental interactivity, developer Surgical Scalpels are keen to push the limits of what's possible whilst retaining a fast, accessible shooter framework.

Designing Zero-G combat must bring with it significant challenges to crafting level design. What is your design philosophy when creating multiplayer maps?

The design aspect and creation of these was challenging at times. We needed to repeatedly test the features of the design to make sure it would work in a 3D fight.

We had ideas of what sort of structures we could include and since the game is fictional sci-fi it gives us plenty of creativity to come up with the designs. They are influenced by lots of different things such as NASA, our own Chinese Space Agency, films, anime, TV and books.

Obviously they have to be believable structures or at least hint at what they are and how they function to a certain extent. Things like Solar farms, fuel depots and such have to be able to communicate their purpose. But generally speaking there’s a lot of creative freedom to have fun with the design, providing its functional to the game and gameplay.

Surgical Scalpels The minimal curved HUD is a lovely touch.

How much does environmental destructibility affect an average round? Does it have an impact on gameplay, or is it more of a visual flourish?

A little bit of both actually, since Astro-operators as we call them are armed with modern versions of traditional weapons like assault rifles, sniper rifles and such, those bullet physics would be wasted if we didn’t incorporate some environmental destructibility.

In one of our earlier trailers from 2019 we showed an Astro-operator being able to identify an enemy operator who was silhouetted by the sun behind a solar panel. He fires several shots through the solar panel taking out his foe. We have this in the game whereby players can shoot through these objects to take out other players and thus create debris as it splinters off.

In terms of what that does for gameplay, if players shoot out the solar panels (which utilise a form of symbiotic tech to self heal over time) it reduces the cover and concealment provided to players.

Is there any narrative context for the multiplayer? i.e. a reason for the fights to occur?

There is, and we’re looking at the possible ways to bring in the larger narrative aspect of that story as a full campaign setting perhaps as DLC or add on content, but how that would work depends greatly on the success of Boundary as a multiplayer game first.

To design and create both a detailed Multiplayer and single-player game supported by a narrative, characters and such would have been a huge undertaking for a small team like ours at the time so we basically had to decide between a multiplayer based game or a campaign based game. For the most part though Boundary at its core is the conflict between two groups through high intensity zero gravity combat.

Does the PC version have any exclusive features, or will it be the same as the console editions?

The only features exclusive to PC will merely be tech based, how graphics are presented and processed, that sort of thing. The additional power that very high end custom PC’s can provide obviously gives them a visual boost when it comes to games but ideally we don’t want there to be any feature specific features unless we can balance that across the formats.

For example, if we were to introduce a feature that’s exclusive for PC players, we would then look to bring an exclusive feature to console so that we are not bias to a particular platform or audience. We value the community we have and they provide some great feedback and questions on the game through Discord, and we don’t want to jeopardise that by showing bias to one platform of players over the other.

Do you have plans to support the game post launch? If so, do you have a roadmap for content and updates?

We do! In fact the game is pretty much complete now so all our focus is going on the usual fixing and pre beta checks as well as the post launch ideas and roadmap and content we’d love to bring to Boundary. That’s obviously in relation to our team size and budget, but we’re looking at what and how we could add to Boundary post launch.

We recently just changed the team sizes, so we now have 2v2 and 3v3 matches, as well as the 5v5 set ups, because we know that multiplayer gamers like to have that diversity in the groups and friend sizes when playing online.

Is there any chance that, one day, Boundary will feature the docking ring from Star Trek: Deep Space Nine as a playable map?

We love sci-fi, games and anime and rest assured we’re always looking at the cooler aspects of it across film and TV shows to potentially put our own spin on an idea or design that could inspire something within the team. Additionally, partnerships with well known I.P may also become a possibility in our future games.

A huge thank you to Frank for taking part in this interview, as well as Aidan and the team at Plan of Attack for helping make it happen.

Bungie announced they will continue the partnership with Twitch as several more Destiny 2 drops will be available for those who have the Prime subscription.

Xur is back for another round of Destiny 2 Exotic sales, offering another set of items, some of which are highly useful as the weapon is great, Titans' Exotic is awesome, Warlocks' so-so and Hunters' is situational.

It looks like the fan-favourite villain from Far Cry 3, Vaas Montenegro, could make a comeback in the upcoming Far Cry 6. The key art for the game just leaked on PS Store, revealing what appears to be a younger Vaas.

Ubisoft have been listening to the Ghost Recon: Breakpoint community in regards to customisation in the Gunsmith, which are coming with the release of TU 2.1.0.

Infinity Ward have released a new patch for Call of Duty: Modern Warfare on all platforms. This time, it is a minor one with several fixes for Rytec AMR explosive round bugs and other issues.

It looks like the iconic Intervention sniper from Call of Duty: Modern Warfare 2 could make a big return in Season 5 update for Modern Warfare and Warzone.

Ubisoft have officially confirmed that they will reveal more details about Ghost Recon: Breakpoint AI teammates update at the upcoming Ubisoft Forward event on July 12, 2020.

Mafia: Definitive Edition has been delayed

Mafia: Definitive Edition has been delayed

Hangar 13 and 2K Games have announced that Mafia: Definitive Edition will be pushed back in order to ensure a smooth launch, and the new date is September 25, 2020.