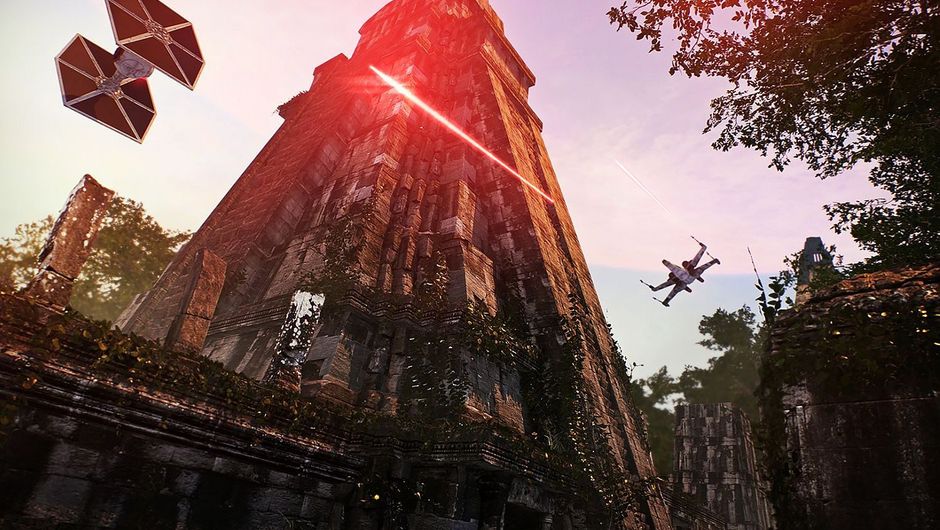 EA must have realised that anyone buying their Battlefront reboot at this point is probably doing so by accident, so they are giving the game's mess of a scam season pass away for free. Even if you don't own Battlefront apparently.

EA have achieved a minor marketing/advertising miracle with their 2015 Star Wars: Battlefront reboot. The game launched shortly before The Force Awakens hit theatres, was eagerly awaited by fans of the series ever since Battlefront 3 got cancelled, and had DICE's reputation as a seasoned shooter developer going for it as well. From EA's perspective this is as close as they will ever get to Easy Mode with any of their releases outside of their licenced sports franchises.

Star Wars: Battlefront promptly broke some sales records riding on a tidal wave of hype, but customers soon realised that what they got was a weak Battlefield re-skin desperately in need of more content. EA had of course planned ahead and had a season pass scheme set up as a contingency. The scam backfired a little, so the developer and publisher were stuck with a fractured playerbase and little motivation to fix the issue, probably because they were hoping to sell a few more season passes and/or DLC packs, rather than hold up their end of the games-as-service bargain.

Realising that sales probably won't be getting any better, and hoping for another free publicity pass, Battlefront was free for a EA and Origin Access subscribers back in December, just in time for the release of Rogue One.

Star Wars has been a mess of merchandising and cross-promotion ever since George Lucas decided that he would rather be selling toys than making movies, so it isn't entirely clear which product is supposed to help promote which Star Wars product. Either way, some players got a free Battlefront game, but the convoluted DLC scheme remained in place.

EA is by now probably aware that they can only squeeze more negative press out of the first Battlefront, and with another Star Wars movie and Battlefront 2 releasing in a short while, it is now time to act all generous and a tad repentant with their DLC cash cow by giving it away for free. Just the milky creamy DLC, not the cow.

All of the lucky EA and Origin Access subscribers who got a glorified beta of a game for free last year can now complete the package with all four of Battlefield's DLC packs, alongside anyone else who would want to have it in their library, whether they own the base game or not. The publisher could have offered up the DLC for free sooner, if they were really more concerned with the coherency of their playerbase, but they didn't because inconveniencing players is a great way to make more money.This means that EA has most likely given up on delusions of being able to sell more of the accursed things, especially since they are going to abandon the practise entirely for the sequel.

Leasson learned? Unlikely. The publisher must have found some other way of milking the game post launch, so you can probably expect some sort of lootbox system and more cosmetics than anyone would know what to do with.

I bet a lot of the people who paid for the season pass or pre-ordered the first Battlefront feel really well about their purchase by now.

Making the DLC free so close to the release of Battlefront 2 and doing so even for players who don't own the base game is as hard as anyone can squeeze a franchise and comfortably get away with it. On one side, it provides some free exposure for an upcoming product while at the same time appearing benevolent, and on the other side it opens up the possibility of a few deluded souls coughing up some cash for what meagre drops are still being secreted by EA's cash cow of yesteryear.

DICE Star Wars: Battlefront II - Is it just me, or does Yoda look bored?

The Star Wars licence is as close to a licence to print money anyone can hope for, and it ending up in the hands of EA means we have many years ahead of us with ample opportunity to discover what new ways of pulling a fast one the publisher might come up with. The next season of hyped and shady is coming our way 17 November 2017.

Riot Games have officially unveiled the abilities of Valorant's poster girl, Jett. She hails from Korea and features the powers of controlling the wind.

Riot Games have officially unveiled the abilities of Valorant's poster girl, Jett. She hails from Korea and features the powers of controlling the wind.

Rockstar Games are offering triple bonuses in some activities this week along with plethora of discounts. However, some of the chosen activities may not be to the players' liking.

Rockstar Games are offering triple bonuses in some activities this week along with plethora of discounts. However, some of the chosen activities may not be to the players' liking.

Fleet carriers are a long-expected addition to Elite Dangerous and the players will finally be able to get their hands on one on 7 April 2020. This is through beta testing though, with the actual launch being later this year.

Fleet carriers are a long-expected addition to Elite Dangerous and the players will finally be able to get their hands on one on 7 April 2020. This is through beta testing though, with the actual launch being later this year.

Massive Entertainment are still dealing with the overtuned stats of NPCs since the introduction of Warlords of New York expansion and patch 8.5 will continue nerfing them. Some of the most hated enemies, such as Warhounds will get hit.

Massive Entertainment are still dealing with the overtuned stats of NPCs since the introduction of Warlords of New York expansion and patch 8.5 will continue nerfing them. Some of the most hated enemies, such as Warhounds will get hit.

Call of Duty: Warzone PC players are reporting various freezing and crashing issues without error code just minutes after the match starts. Here are some of the solutions you can try before Activision deploy a patch.

Dev error 6071 code is one of the most common errors that you'll encounter in Call of Duty: Warzone. It can be pretty frustrating but luckily, there are some potential fixes while we wait for the official patch.

The disc read error is a small but annoying issue that can sometimes show up out of the blue, preventing you from playing Call of Duty: Modern Warfare. Luckily, the error is very easy to fix.

In the latest gameplay steam, the developers of the anime MMORPG Blue Protocol confirmed that the game will be free to play with an option to buy cosmetic items, which will not affect gameplay.

The long-awaited update that adds the ability to travel back in time and complete side quests that players may have skipped during their initial playthrough of Dragon Ball Z: Kakarot will finally be released sometime this month.

League of Legends fans continue to speculate on the new champions to be released this year. Riot Games teased us with some clues in their dev video at the start of the year. A recent tweet from a popular streamer seems to shed even more light on who the new champion could be.

Bandai Namco's anime MMORPG Blue Protocol has two new screenshots, showcasing a new dungeon, that will be available in the beta and a giant summon that helps players during combat.

Warlords of New York has launched in The Division 2 just recently but data miners have managed to bring out a lot of useful info regarding the Exotic weapons and gear. Now we can all know where to farm each of these beauties.

Ian Bell, the CEO of Project Cars developer Slightly Mad Studios has hyped up Project Cars 3, saying that it is still a game-changer and its development is progressing well. More details will be released in the upcoming weeks.

The game codenamed Viking was originally planned to release sometime in 2020 along with the next-generation consoles but EA decided to axe the title since the release date was unrealistic.

E-mail invites to the Star Wars: Battlefront II closed alpha have been sent out. The alpha becomes available 29 June at 9 AM BST, but some people are reporting that they already have access to the game. The first impressions are being shared on the game's official forum.

Sweden might introduce a ban on loot boxes by 2019

Sweden might introduce a ban on loot boxes by 2019

Sweden has joined the legislative battle against loot boxes. The minister of civil affairs, Ardalan Shekarabi, suggested the mechanic could be banned by 2019. A study from the University of Hamburg prompted the German Youth Protection Commission to also take action.

Battlefront 2's first DLC will be tied to The Last Jedi

Battlefront 2's first DLC will be tied to The Last Jedi

EA's thralls are still pretending that Battlefront (2004) never happened and that Battlefront (2015) was actually pretty good. Battlefront 2 will release a few months before The Last Jedi hits theaters, but appropriate DLC will be deployed in time to exploit the free publicity generated by the movie.

Star Wars Battlefront II's the Last Jedi Season has come to an end. DICE has plans for a new progression system they say are developing with player feedback in mind. A time limited game mode is coming to Battlefront II in February.

It's been almost two years since the release of Star Wars: Battlefront II and EA have finally decided to remove the loot boxes from the game. In the latest Cooperation Update, the patch notes mention that Daily Crates are gone for good.

A chance to blast Jar Jar in the face, repeatedly?

Star Wars Battlefront 2 has a roadmap for the first time

Star Wars Battlefront 2 has a roadmap for the first time

Ben Walke, EA's community manager, has been teasing Star Wars Battlefront 2 roadmap for a while now and finally shown it in the end. The picture details EA DICE's plans for the game in the remainder of 2018, including new heroes and maps.

Obi-Wan Kenobi to join Star Wars:Battlefront 2 in the next update

Obi-Wan Kenobi to join Star Wars:Battlefront 2 in the next update

EA DICE have announced that they will add Obi-Wan Kenobi to Star Wars: Battlefront 2 in the upcoming Battle of Geonosis updates. The legendary Jedi master needs no introductions, but you may want to glance over his in-game abilities.

EA are bringing microtransactions back to Star Wars Battlefront II

EA are bringing microtransactions back to Star Wars Battlefront II

Star Wars Battlefront II's revamped microtransaction system is making a debut, just as EA's team of executives was shuffled. This time around, the game will only sell Crystals for real currency and they can only get you cosmetic items.