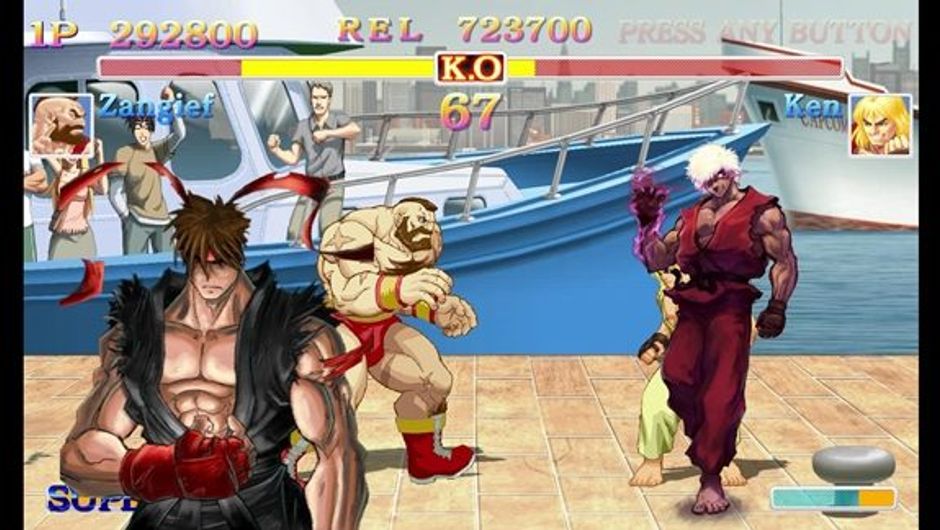 Ultra Street Fighter II: The Final Challengers is out for the Nintendo Switch. Check out our video to see what we had to say.

Nintendo Switch fans looking for a break from Zelda and SNK games can rejoice as the Switch is getting an exclusive Street Fighter game. Read on to see our in-depth review of Ultra Street Fighter II: The Final Challengers.

Ultra Street Fighter II: The Final Challengers was released on the 26th May and is now the eight definitive version of Street Fighter 2 since the game's​ original release in 1991. That's right, we have eight different versions of the same game:

To give Capcom some credit, each game has made improvements on the graphics, controls and general bug fixing with each game. 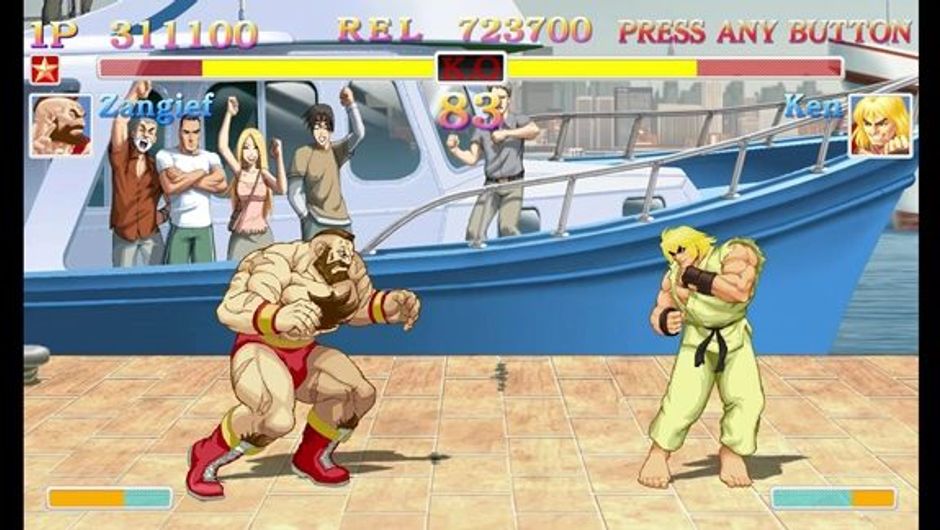 The first five games that were released over the course of four years really could be considered a precursor to DLC as their main selling point was new fighters.

For the sake of clarity, Street Fighter II is a 2D fighting game. The objective of each round is to deplete the opponent's health before the timer runs out. You do this by mashing buttons, and, eventually, due to the rules of chaos theory, you do a special move.

Capcom Balrog - doing what he does best. 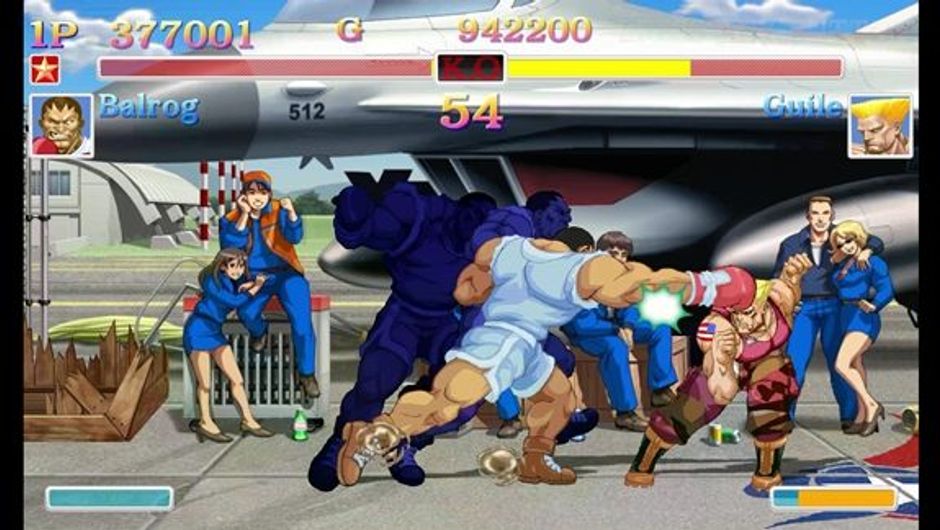 Learn how to do more of these and become a Street Fighting master. Then play online and get humbled.

There are a few game modes to keep you playing the game.

First we have classic arcade mode. Pick a difficulty, pick a fighter, fight through all the randoms, beat Balrog, Vega, Sagat and M. Bison and watch an ending. 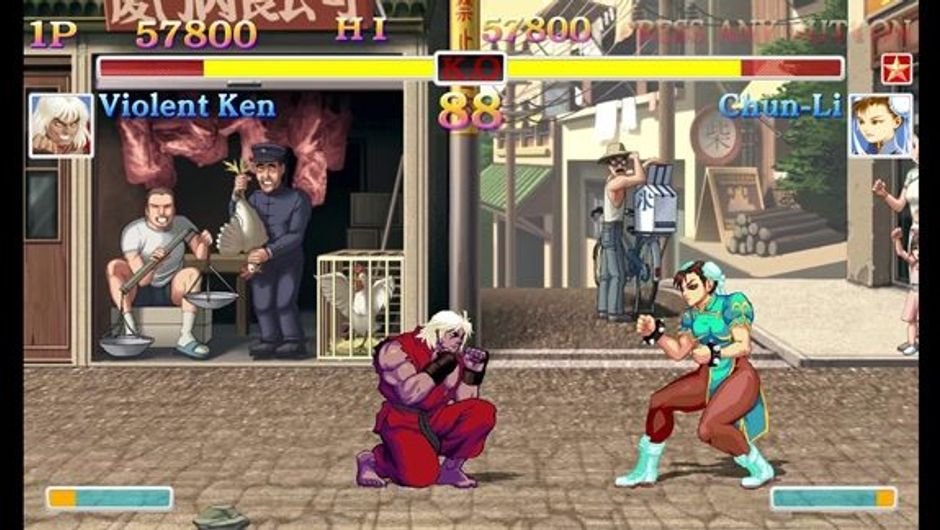 There is an online mode for the game with ranked and casual matches. It's a standard affair, but we will talk about it more when we speak about the controls. We have a lot to say on that. 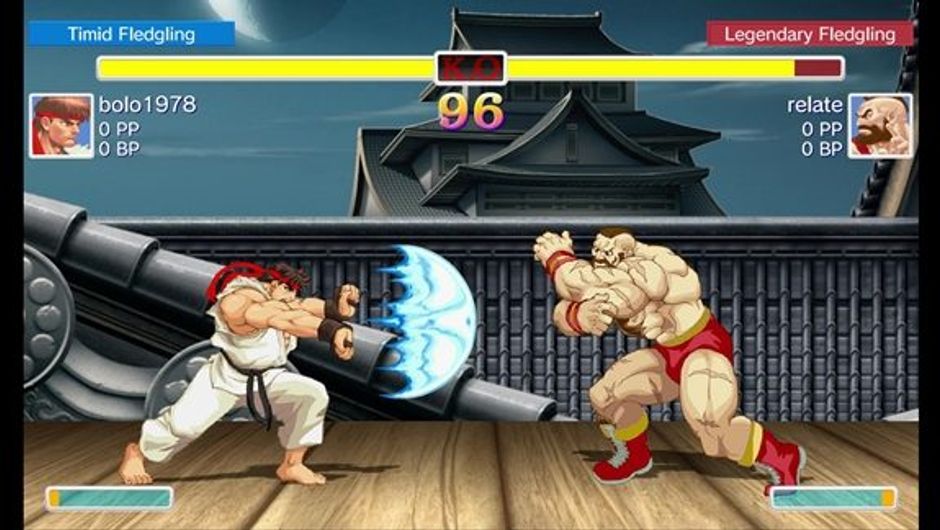 There is also the Dramatic Battle Mode, called "Buddy Battle", that was featured in home versions of the Street Fighter Alpha games, which allows two players to face CPU opponents together. You each share the same life bar, so if your friendship hasn't ended when playing against each other, this is a sure fire way to do it. 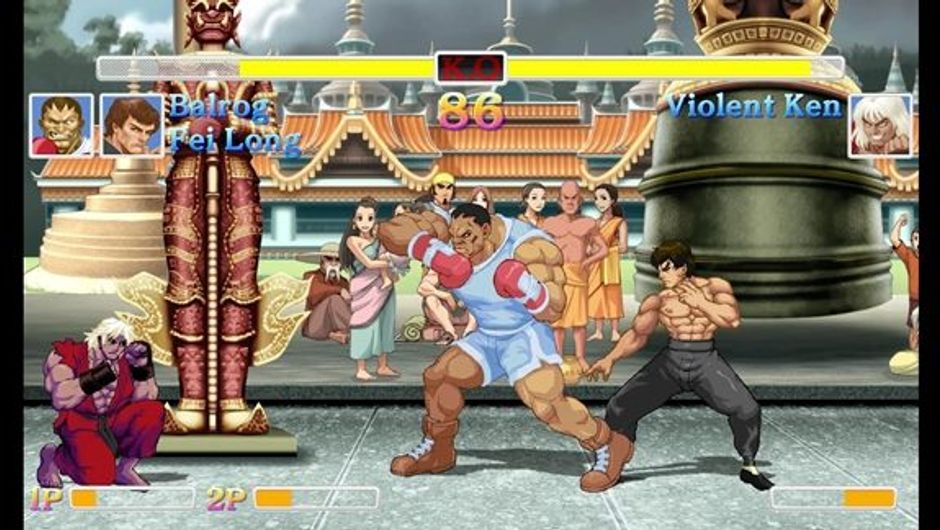 In an attempt to remind everyone that motion controls do exist and that the Switch supports them, there is a brand new mode called Way of the Hado in which

players can play a unique first-person mode and experience what it's like to be Ryu. By using motion controls to perform moves, players can fight off an onslaught of opponents using the iconic Shoryuken (dragon punch), Tatsumaki Senpukyaku (hurricane kick), and Ryu's fireball super combo, Shinku Hadoken. 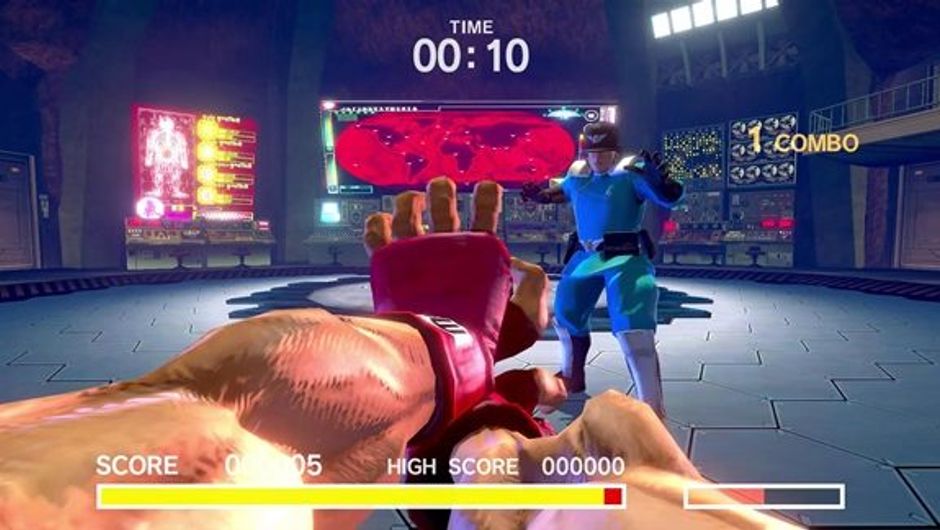 The big question here is: does it work and is it fun? Answer: No.

The motion controls, we found, did not work that well. There is a clear difference in the motion action to perform the moves, but it seems like the game just randomly picks what you want to do. Senpukyaku and Shoryuken are very different moves, but, occasionally, when trying to do the Senpukyaku, it would just do the Shoryuken.

There are three different difficulty modes, and the only difference between them is the enemies stand further away, coupled with the controls - it's a not a fun time.

There's a little RPG element with improving Ryu's stats, but the effort you put in for the reward is not worth it.

The game will also feature the ability to switch between HD visuals and the classic graphics, as was seen in 2008's Super Street Fighter II Turbo HD Remix. These changes can only be made at the options level so you can't do it mid battle, which is a shame.

We got to say, the HD visuals are not all that. They look nice but not as good as they could have been. You can also switch between the classic and new sound modes for updated music and effects. 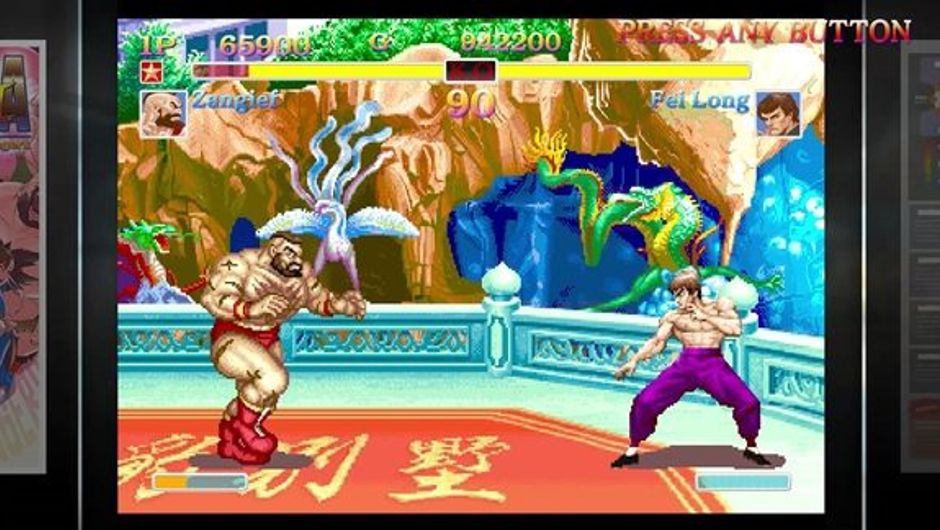 The classic mode style is not a full change. The HUD still maintains the HD style and the announcer for the stages is in the new style. Although this might seem like a minor complaint, but when you make a game that advertises a classic mode on the box, we expect it to have a complete classic graphic and sound presentation.

Oh the controls... There's so much to say about the controls. Much like our video on , controls are really important in a fighting game. Luckily, there's not much lag, and the punches and kicks flow like they did in previous Street Fighter II games. Because of the variety in control modes for the Nintendo Switch and the button layout, you are getting a different experience every time you play.

Portable mode and the JoyCon grip

Playing the game on portable mode, or with a JoyCon grip is okay, it's not amazing. We preferred using the analogue stick, as we found it easier to do moves. A lot of people may consider this blasphemous and that the true way to play a Street Fighter II game is with a D-Pad. Unfortunately, the Switch controls don't have a traditional connecting D-Pad, just four individual buttons. It's harder to execute moves and also jump forward or backwards.

Like Super Street Fighter 4 on the 3DS, you can press the screen to execute special moves for your character. More on that later.

Playing the game with the individual JoyCons is not a fun experience. First off, you have no connecting D-pad. Secondly, you can't use the shoulder buttons anymore, only the SL and SR, so you are two buttons down. Thirdly, they are really cramped and hard to use. For beginners they might actually be okay, because you are just button mashing, but if you want to execute any proper moves and play competitively, this is not the way to go.

We mentioned in our that we could happily play with the individual JoyCons with four people for many hours. Since then, we now argue over who has to use the Pro Controller in that game. Not because it's bad, it just feels better with the JoyCons. It's faster to press the few different buttons you need to in that game.

In Ultra Street Fighter II: The New Challengers, the crampedness means that it's a hard time. Depending on what hand you write with means which JoyCon you are going to be preferring due to the placement of the buttons.

If you are going to play with two left handed or two right handed people, one of you is going to be at a severe handicap as it gets more cramped and uncomfortable.

The Pro Controller is the way to go. If you think you are going to be putting hours into this game, invest in the Pro Controller. The button layout is perfect and it works well. 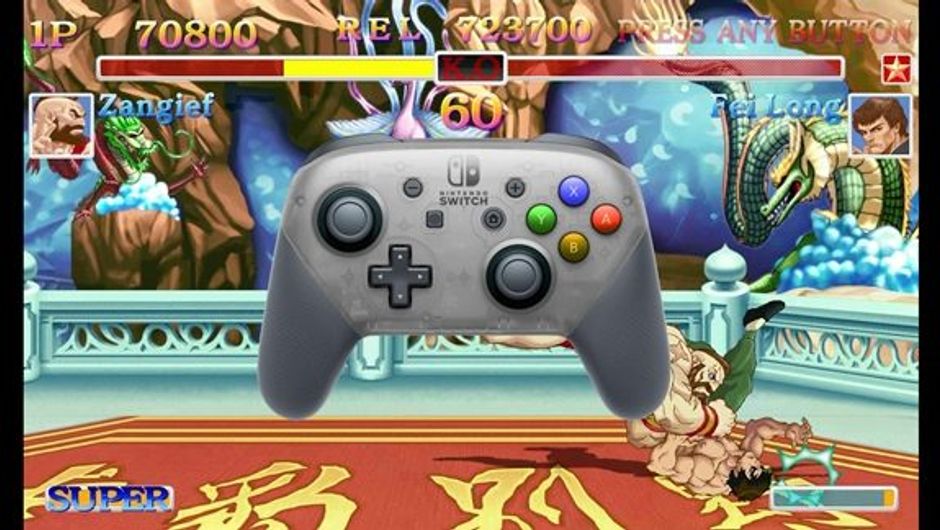 Button customisation is the biggest complaint we have with the game. It may seem weird and a bit idiosyncratic on our part, and, yes, we are going to show our age now and sound like a bunch of old gamers raging against the the new generation and millennials, and you may think we are just blinded by nostalgia, but goddammit, this matters to us.

Back in the day, when playing Street fighter II, you could only play against the computer or your friends. That was it. The problem with the friends was that your own progression and improvement came with theirs. And you could only be the best player out of your social circle.

You had to learn together how to play the game. After a while, you would both learn each other's habits and moves. For example, I always jump at you, do a high kick, duck and do a low kick for a two hit combo with high damage. Eventually my mates learnt to block as soon as they saw me in the air.

Online play opened up a whole world of players to fight against. Finally, you could find out how good you were. If you are serious - ranked play. If you are not - casual play.

In Ultra Street Fighter II: The FInal Challengers, you can change the button placements for punch and kicks in Pro mode. Great, love it! We cut our teeth on Capcom vs SNK 2 on the PS2 and I like to have my high punch on R and High Kick on R2 or ZR. This lets me do that.

But there is another control mode called Lite mode which lets players perform special moves or super combos by either touching the touch screen or pressing a single button.

Capcom We do NOT like the simplified super moves. Not one bit.

We could play against someone that could just throw out moves without a care. This renders this whole ranking system being not a proper fighting ranking system, but a pale comparison. We can’t respect it. We hope that, at tournaments, this mode is turned off.

Yes, there are two new characters - Evil Ryu and Violent Ken - but their impact is so minor that we have left mentioning them to the end of this review. For a fighting game, that’s bad.

The first few versions of Street Fighter II were based around new characters, and they could carry on that alone in the early 90s. But in the year 2017, it's just not value for your money.

If you are a hardcore Street Fighter fan, you will enjoy it, but you won't be getting much extra to keep you occupied. Buddy Mode and Way of the Hado are just gimmicky stocking stuffers. The classic mode just doesn’t respect the original craft.

If you are aching for a fighting game for your Switch, we recommend taking your £35 and buying a load of SNK fighting games on the eSHop. For the same amount of money as Ultra Street Fighter II, you could buy King of Fighters 98, Samurai Shodown IV, Fatal Fury, Waku Waku 7 and World Heroes Perfect.