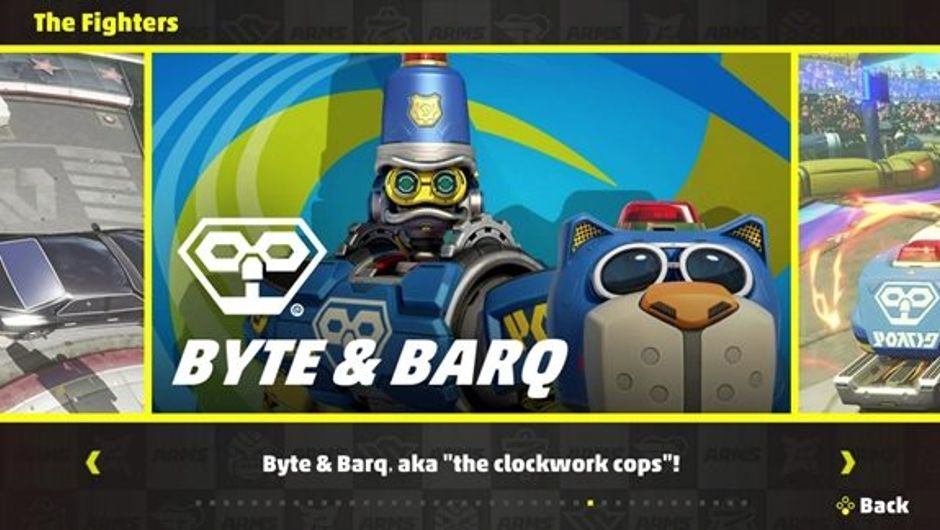 Nintendo have released a brand new IP for the Switch. Watch or read our in-depth review to get all the information you need about this new fighting game.

It only took three months but Nintendo just released a brand new IP for the Nintendo Switch. No sequel, prequels, ports or remakes - an actual brand new game. We are, of course, talking about Arms. A game that Eurogamer said “does for fighting games what Mario Kart did for driving games”. Edge says it is to the fighting game what Splatoon is to the online shooter. Do we agree? Read on to see what we have to say.

Normally in this section we talk about the history of the game and the franchise, but we can’t do that because Arms is completely new. So let's talk about the Nintendo EPD that developed the game instead. It was created after the merger of the company's Entertainment Analysis & Development (EAD) and Software Planning & Development (SPD) divisions in September 2015. Since then, every major game from Nintendo has been made by them, The Legend of Zelda: Tri Force Heroes, Animal Crossing: Amiibo Festival, Star Fox Zero etc.

Arms exists in an alternative universe where people have springs for Arms, with the exception of Twintelle who uses her hair, and they use these to fight each other to become the Arms Grand Prix champion.

Nintendo It's all about becoming the Grand Prix champion in Arms.

There isn't much more to say, the setting is an extension of the gameplay which is fantastic.

There really isn't any other game like Arms on the market that non-hardcore fighting fans can point to. Although there are differences between Street Fighter, Mortal Kombat, Injustice and Tekken, normal gamers would be hard pushed to describe them.

Arms operates much like Pokken Tournament on the Wii U, which will be coming to the Nintendo Switch, by having a simple rock-paper-scissors style of conflict resolution.

In Arms, you can punch with your left arm and right arm, grab, charge up, block, dodge and jump. Also, each character has a unique ability that distinguishes them from all the others.

First we have the cover star, Spring Man. He is able to deflect attacks and is able to have his punch constantly charged when his life bar drops below 25%.

Every time Ninjara dashes or blocks an attack, he will disappear with a smoke bomb for a second, allowing him to counterattack.

Master Mummy has multiple known abilities, such as taking nearly no knockback from normal punches and being able to regenerate when guarding. However, he is also one of the slowest character in the game.

Due to her robotic armor, Mechanica is able to hover for a few seconds and it is harder to stun her.

Min Min is able to deflect enemy's punches by kicking them if she dodges while in mid-air. Her left arm transforms into the body of a dragon when charged.

Twintelle can slow down attacks and herself while in mid-air.

Byte can use Barq as a launch pad to get high in the air. It also randomly attacks the opponent and can take hits. When activating the flurry attack, the pair combine in a single unit.

Kid Cobra can charge up dashes in conjunction with ARMS, making dashes quicker and giving more distance. When “charge dashing” on the ground, Kid Cobra will duck under all incoming attacks.

Helix's elastic body allows him to shrink and stretch at will, allowing him to dodge all types of attacks, including the rush attacks.

There are 11 playable characters in total, each with their own level that is an extension of their personality, but that’s really it. It’s a classic archetypal fighting videogame. A variety of characters and settings with an easy to pick up and play, but hard to master.

The complexity in the game relies on knowing when to punch and when to dodge. There is an uncontrollable collective unconscious desire of gamers to button mash if it’s the first time playing a new fighting game. You can do that in Arms, and if you are playing against others like yourself, you are going to have a great time. But if you are playing at a higher level against the machine or online against trained players, you will get punished.

In addition to choosing the character the player plays as, the player can choose between 3 ARMS for the character and change between each round. You do not have to use the same ARM for both arms. The ARMS can also have 1 of 7 attributes; Fire, Electric, Wind, Ice, Stun, Explosion, Blind.

Nintendo The ARMS can have one of seven attributes.

Heavier ARMS can go through lighter ARMS in direct collision. All ARMS are compatible with the whole cast but they need to be unlocked with the in-game currency, however each person in the cast starts with 3 arms for free.

Let's talk about the game modes in Arms. First up is Grand Prix which we have previously touched on. The player fights 10 fights in a row, ending with a fight against Max Brass, followed by a second fight against Max possessed by Hedlok, but that is only if you do difficulty level 4 or higher. And Hedlok is brutal. He’s like Goro in the original Mortal Kombat mixed with Mike Tyson from Punch Out! This is a classic hard video game boss.

Fights leading up to the final fight can be in the different game modes that you can also play at your leisure:

There is also a single player 1-on-100 Horde mode where 100 helix-like enemies attack you in waves.

All of the modes, except for horde, can be fought in team battle style. Arms fights supports up to four players online and also offline. That’s right, in 2017 there is a game that has 4 player offline split screen action. What a novel concept!

Nintendo Arms is one of the rare gems that supports 4-player offline mode.

As you win fights, you get more in-game currency which you use to get Arms, just like the menu tells you to. The higher amount of currency you have, the longer you can get to punch open new Arms. Yes, this game makes you work for your loot even when it should automatically be yours.

Online is split between Party mode, where everyone is learning, and ranked mode. Because you have to unlock Ranked mode all the players in there are serious. They know what they are doing and how to play - you need to come in prepared.

None of the modes are designed to give you a break, they are all designed to teach you more about the mechanics of the game and how to git gud. Hoops is all about learning how and when to grab, Skill Shot is how to line up your punches and V-Ball is learning timing for your punches and moving quickly around the stage.

The only break and relaxation you get in the game is turning it off, as when the game is on you are in a constant battle to win. Not because you want to, but because the game gives you no other choice. It can feel like a constant tutorial.

It can seem to be a party game and great with friends through marketing and promotional material. Which it is. But if one of you starts getting good at it they will leave the pack and the fun fades away.

It may look and sound fun and light hearted, but it’s not. It’s serious, complex and hard. And unfortunately, at times, it’s not fun on your own.

The presentation of Arms is a spin-off to what Nintendo is doing with Splatoon. It’s a bright and colourful colour palette with everything clearly identifiable. It does come across as cartoony when compared to other fighting games desire to be as real life as possible which pushes them into the uncanny valley.

Like Splatoon, the game is a rebellion against the desire for browns and greys in dark lighting. Just because something is dark does not necessarily mean it’s deep and good.

Arms is a caricatured delight that celebrates its absurdity. It’s like the fight scene in Captain America: Civil War. It’s over the top and clearly is not trying to be an accurate representation of real life, but it wants you to be able to see everything that is happening on the screen.

Sound of the game is just as funky and fun, but doesn't seem very original. Parts are very reminiscent of Splatoon, to the point of it being a shameless rip-off. If this wasn't developed by Nintendo, they could consider copyright action against Arms.

Nintendo really want to bring back motion controls in Arms. When you first start the game, the first thing it talks about is that this is a Thumbs Up game, showing you how to correctly hold the JoyCons. The motion controls do work, and there is a clear improvement from the Wii and Wii U days.

The problem with motion controls in Arms is that they are slightly gimmicky. Great for playing against friends in the same room, but completing the Grand Prix above level 4? That’s not going to happen. If you want a good work-out, motion controls are for you.

Nintendo The game wants you to play using the JoyCons, but we don't think that's the best way.

To play this game competitively and competently you need to use the JoyCon grip or the Pro Controller. The button layout is perfect and there is no lag. The reason you need a controller rather than motion controls is because you are going to be dodging and jumping a lot and it’s so much easier just pressing X and Y.

The game also supports a single JoyCon, but, like we talked about in our Street Fighter 2 review, playing fighting games on these is a cramped uncomfortable experience.

In portable mode the game plays great. The screen looks great and controls work. Nothing to complain about. So far with every Nintendo game we have played, there's been no complaints between portable or docked.

Compared to Splatoon and Mario Kart, Arms has defined a new type of fighting game in Nintendo fashion, and it is a great video game - it does everything correct. Great graphics and sound, fun characters, unique levels, simplistic but complex gameplay.

But unlike Splatoon or Mario Kart, it can become no-longer-fun quite quickly. The problem is that some people are getting really good at this game, and the worry is that it won’t be as fair for new players in the future. It has the potential to go the way of Super Smash Bros.

Nintendo Arms is definitely a game with a lot of potential.

If you are thinking about getting Arms, we suggest getting it sooner rather than later. This game's community will soon only be left with the most hardcore and it’s going to be more of a grind to learn the game.

At the moment, it’s like when Splatoon first came out on the Wii U - no one properly knows how to win, so everyone is just having fun. But, unlike Splatoon, you are not going to have that space to grow as a player because Arms is much more combative, as it’s a one-on-one fighting game.

Overall, we give Arms: 7/10. It’s doing everything right and, yes, it is brand new and nothing like we have seen before - but it does stop being fun.