Review: The Mooseman by Vladimir Beletsky on Nintendo Switch 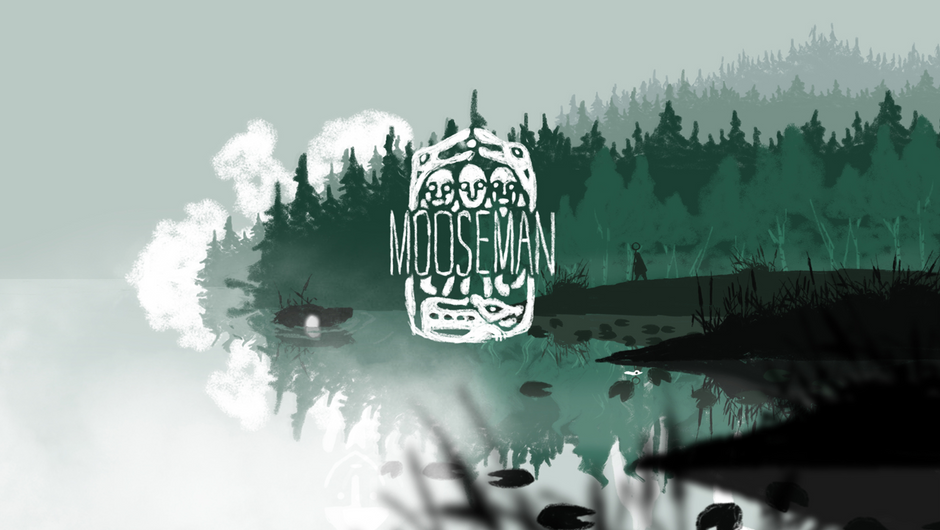 As we enter the Summer AAA drought, it’s up to the Indies to keep us alive. Today, we are going to be looking at The Mooseman by Vladimir Beletsky, originally released on Steam in February 2017 and now on Nintendo's flagship console.

Russia has a rich history of folklore dating back hundreds and even over a thousand years. The Mooseman tells the folklore of the Perm ‘Chud’ tribes during our adventure as The Mooseman himself - yes, it may sound funny, but don’t chuckle, this folklore has more substance than idolising Marvel heroes.

The Mooseman is a mythological character with the ability to see objects beyond the mortal realm and he must travel the three layers of the universe taking shard of light from the underworld to the upper world.

It’s a single player, 2D puzzle adventure which was developed by a small Russian team and takes inspiration from the tribal collections held at the Perm Historical Museum. Overall, it is not a great game, unfortunately.

It is very dark, making it difficult to play or enjoy in handheld mode, especially the white text occasionally against a light grey background. Not only this, the text is written as if it were from ancient runes and thus crooked - completely not fit for handheld play. The limited colour and simple graphics are creative which does work but you will want to push the game through your TV to fully appreciate it.

My first impression was skewed when I wasn’t allowed to play in handheld mode. Why would anyone release something on the Switch whose unique selling point is holding it in your hand and then not allow this as an option? So I removed the JoyCons and after about five minutes I thought: let me reconnect them and see - it worked, but as mentioned, this mode is not the way to appreciate and enjoy the game.

The atmosphere and scenery consists is mainly shadows and silhouettes of strange creatures and dense forest - so dense that it is quite impressive. In Mooseman mode, each apparition and inscription come alive and become more sophisticated and magical the farther you get in to the game.

Vladimir Beletsky The Mooseman is out now for Nintendo Switch. 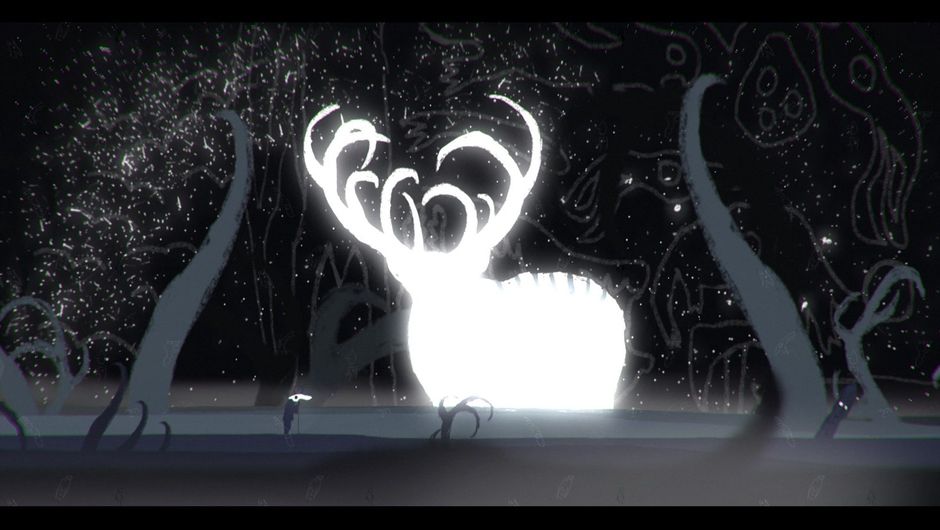 The music works exceptionally well, with some fitting and impressive folk songs performed by the Perm regional college of arts and culture, creating a haunting feel and dark mood. This game is 16+ most likely for this dark feel, the scary moose head you have on the main character, the music and probably because you need to be patient to appreciate the pace.

The sound effects are competent, however the sound effect for switching between Mooseman mode and normal is grating after a while. In parts the spoken dialogue was done by a native komi-permian speaker and being narrated in this way is welcomed as it makes the story feel more authentic.

However, it mainly appears at the start of chapters it is not easy to follow, you will probably go into the menu and re-read it. As the story is short and the gameplay does not add much more I would argue that you do not feel it is tied in to the game you are playing, meaning you will not feel for your character.

To say the controls are simple is seriously overstating it - move right, left, double tap to move automatically, tap A to go in to Mooseman mode, tap B sometimes ... yup that's it - no challenge, skills to learn or combination required.

Tapping A, as mentioned, activates Mooseman mode and you will be donning a moose skull headpiece allowing you to see hidden objects and most puzzles require switching in and out of this mode. There is no real interaction or exploration, you occasionally step on switches, move objects to create a bridge, hide from foes, or in one case coerce unsuspecting animals to sacrifice themselves for you own escape, but that’s about it, the puzzles are generally simple.

Vladimir Beletsky The game started out in a gamejam in early 2015 and was first planned as a runner with visuals taking roots in Perm Animal Style. 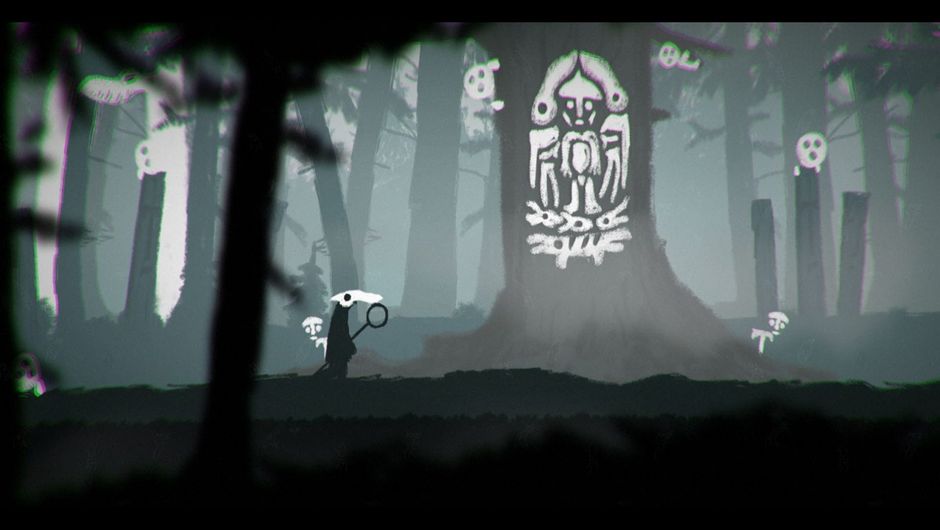 With navigating the menus, the use of the B button to go back does not exist. You highlight Exit and hit A which is a poor transition from the PC and makes the menu experience unnecessarily taxing. Every time you exit from pause via selecting A, the Mooseman mode would also change as you re-enter the game which made me die a couple of times.  Dieing may only take you back a step or two, nothing major, but certainly needs to be fixed.

I could not get the language selection to work in handheld mode.  You may ask why I wanted to change it? I didn't, I just couldn’t understand why selecting A did nothing and hitting B would not come out the menu. Only the written language changes, and I welcome that the spoken language was not be a changeable. As much as I favour it, I think the developers could have had much more native storytelling. I’m personally a fan of foreign movies in their native tongue and I feel this works in games too. Sub over Dub.

You start with an eerie but simple title screen. The game starts in a forest, with obscure noises and distant crashing waves. Straight away you turn left to gain your first artifact and then hit L to read that is over 1000 years old and where it currently resides in the world.

The artifacts are interesting and you will want to pick up as many as you can to fully appreciate the artistic influence, how tribes worshipped and sometimes sacrificed animals, but also because there really isn’t much else to do.

Apart from the story narration, artifacts are the only nuggets of education you will get and there are some which require more skill to find in hidden areas, so the completionists will love this element. Viewing ancient runes as well as artifacts via the Menu is not ideal, particularly as it is not easy to navigate and disrupts the flow of an already slow paced game. 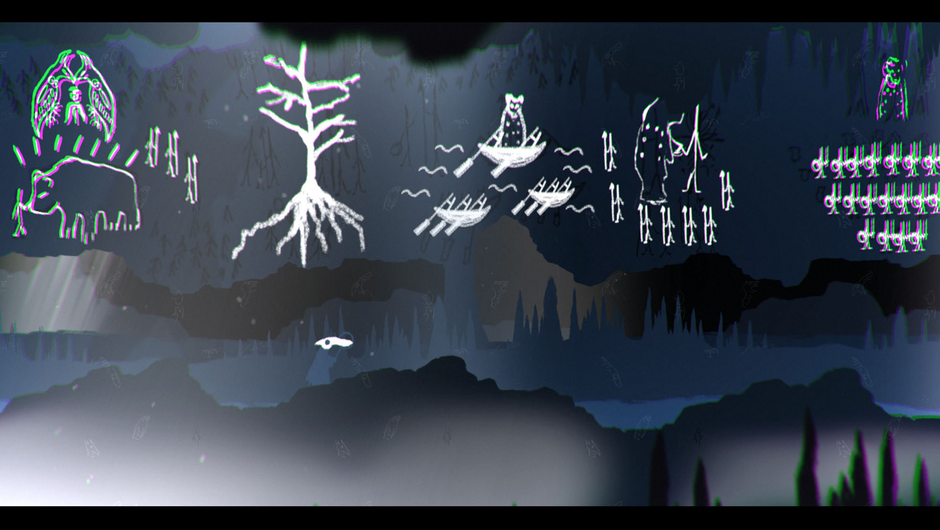 Next you come to a tree where things become very weird and mystical, you tap A and now you have a moose head and ghost-like figures appear. The mode allows you to see and interact with parts of this alternate world and is the main premise of using the mode and you will need to switch modes often as each will either hinder or help you to cross obstacles going forward.

It is not long until you need to use this mode effectively as you come across what feels like your first boss yes there are bosses in the game, but they are not really difficult or lengthy to tackle so it shouldn’t take you too long to figure it out. This game is straightforward in that you live or die, no second hit or damage element, but don't get me wrong - it can be annoying if you keep making a silly mistake.

The ability to move objects means you need to switch modes and the object will have an inscription of an animal and tend to move either toward you or away from you. This switching of modes constantly along with the sound effect becomes very boring. Tap A… Tap A again… A… A, A, A… A…  A.

Not much new really happens for a while - but later you will have a bow and need to hunt the sacred moose. It is nice to see the arrows actually become part of the environment when fired making this part of the game fun but that was about the most fun I had.

Vladimir Beletsky Don't expect an easy journey, there are riddles in the dark. 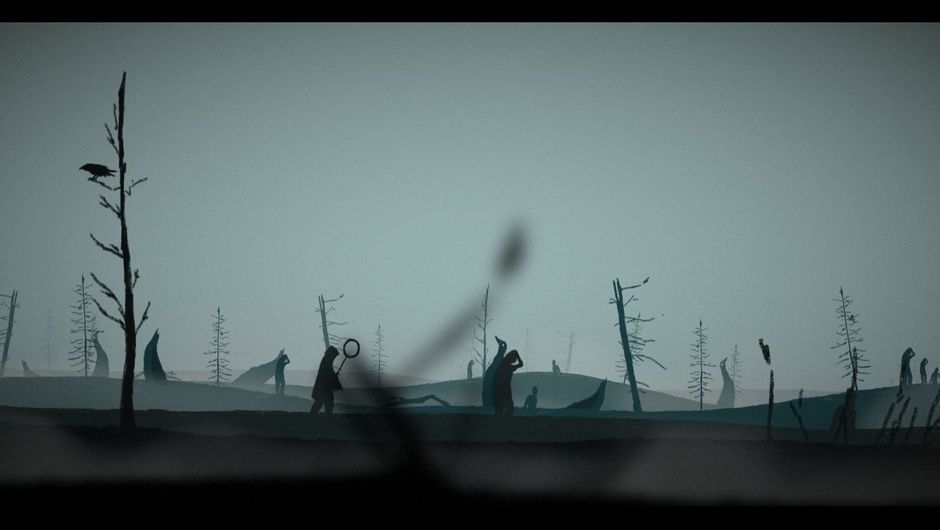 I admit I struggled to figure out who this game was aimed at and what it was trying to do or say. It is educational, but limited, the story screen gives you something to follow but needed more background to engage you and make you want to play on.

Additional narration, background of what is known or even fleshing out the myths more was needed. Ancient stories captivate our imagination, however with very little story, this is lost on the player. These types of games do have real potential to appeal to the masses despite having huge obstacles being developed by a small team. That isn’t to say they have done a bad job, I just needed more, more interaction, more information, more things to do than The Mooseman gave.

Vladimir Beletsky Developers Morteshka are based in Perm, Russia. 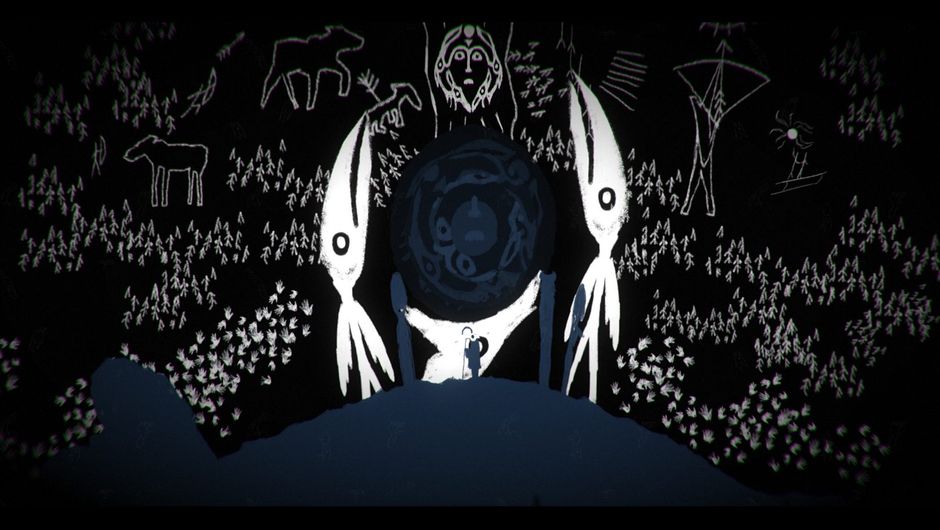 I am not a demanding gamer, but the story of The Mooseman needed to be told in a way to make it more interesting especially as there is little gameplay in between. I believe the game could then have achieved what I believed it wanted to achieve, which was to educate and inspire you to learn more.

If you want challenging puzzles this is not for you as they are few and far between, however without them you would just be walking for a very long time. On the plus side, because it is straightforward you could complete it in a few hours.

One final note, be wary of high scores, this game is not for everyone.  I would have been disappointed if I bought this based on review scores and not written reviews, so get reading and see some gameplay before deciding you want to dive in.

AltChar gives The Mooseman a solid 6/10.

A few days after the release of A Plague Tale: Requiem, players were quick to point out the issues with the game's optimization. Here are 10 things you can do to improve your gaming experience and get the best out of the game.

Lord Shaxx, Saint-14, and Odogaron armour sets have been found in Assassin's Creed Valhalla after the latest title update.

Vulpix will be featured in another event in Pokemon Go, just a few months after the Halloween appearance.

New Pokemon Go season is upon us and some of the most exciting dates for the first few months of 2023 have been detailed.

Indonesian players will see easier usage of the Pokemon Go app with the new language support while enjoying an exclusive event.

Niantic announced a new Mega Raid event for Pokemon Go which will see three debuts on top of a few handy bonuses.