PlayerUnknown's Battlegrounds vs Fortnite Battle Royale: Which game is for you? 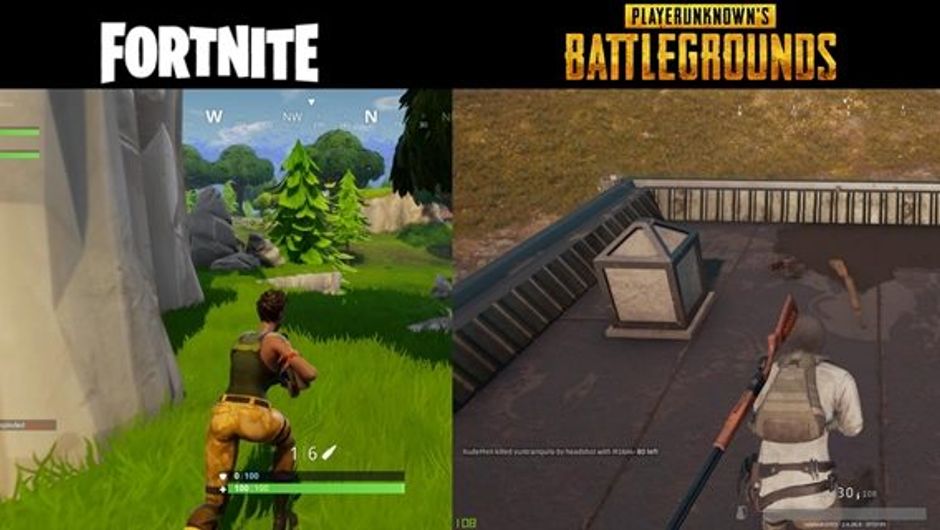 The visual difference between the two games

There are currently two main competitors out in the battle royale field, Bluehole’s PlayerUnknown’s Battlegrounds and Epic Games’ Fortnite Battle Royale. Both games have their pros and cons, and we will try our best to help you make up your mind as to which game to get.

Unless you were living under a sidewalk for the past six months, you've probably heard one of your gamer friends rant on about the infant battle royale genre. There are currently two main competitors out in the field, Bluehole’s and Epic Games’ .

You’ve most likely already seen some of our thoughts and comments about , but Fortnite is still relatively new to the battle royale arena and what better way is there to have one thing say something about the other thing than putting thing two next to thing one and watching them gossip over one another.

Well... Now that everyone is suitably confused, let us proceed in a more orderly fashion.

The first thing likely to poke your eyes out is the visual difference between the two games. PUBG is definitely aiming for a more realistic depiction of fictional island-wide murder rampages, while Fortnite is content with a more cartoony artstyle.

Epic Games The visual difference between the two games

This distinction goes a lot deeper though, as the divide between the two games on their approach to realism extends into mechanics as well. You do have to lead your shots and take bullet drop into account for both games, but PUBG demands a lot more precision while doing so. Where PUBG has realism going for it, Fortnite has a few more silly things going on like jump pads and electric floor traps.

A lot of the things that Fortnite brings to the table are derived from the game’s primary game mode. This soon-to-be secondary game mode features a lot of construction and PvE horde management elements that translate into the battle royale version with varying degrees of gel. What the construction mechanics, obviously absent in PUBG, add to the experience is the ability to instantly create cover, build bridges or platforms to aid in terrain traversal, and any number of tricks you can think of. On the other hand, most objects in Fortnite are destructible, so a house or barn that seemed like a safe place for a bit of a lie-down a moment ago, might be entirely gone after a few well placed grenades or shotgun blasts.

What PUBG lacks in the construction department it more than makes up with its transportation options. Vehicles and all the intricacies of operating them in PUBG haven’t made an appearance in Fortnite yet. Navigation of the two games’ large maps is solved a lot more elegantly in PUBG. Fortnite will let you reach pretty much any place on the map with your first jump regardless of where the battle-bus flies over. As with most things related to depth and complexity, PUBG has a clear advantage here, but not everyone enjoys complexity or depth in their games, so, as always, personal preference plays a huge role here.

Bluehole Studio Drive around in style in PlayerUnknown's Battlegrounds

Bluehole have expressed some over Epic Games releasing their own battle royale game in the past. At the time they said it was due to concerns of epic profiting off their work with the Unreal engine, which both games use and Epic develops and owns. These concerns are only mildly justified. Between the two games Fortnite runs a lot better, allowing for playable framerates suitable for its simpler mechanics even on older machines, while PUBG is already notorious as a resource hog.

To make matters more complicated, PUBG demands precision gameplay but doesn’t provide much in the way of stable performance. Never a good combination for a game with eSport ambitions. This is by no means a result of industrial espionage on Epic’s part. They simply know their own engine better than Bluehole does, and the performance bar is set a lot lower for Fortnite than it is for PUBG.

The elephant in the room is and was the fact that Fortnite Battle Royale is a free to play title, where PUBG has an up-front price, with microtransactions on the horizon. This may have been the chief cause for Bluehole’s concernes in the past, as a lot of potential future customers who don’t buy early access games are likely to be playing Fortnite by now.

In essence - if you are curious about the battle royale genre, Fortnite is a no-cost way of satisfying your curiosity regarding systems and mechanics, and you may even enjoy it in the long run. Those who are already familiar with Battle Royale and are looking for a more realistic and challenging experience are better served with PUBG.

Fortnite's Island isn't the most welcoming place in the galaxy but it's still a bit more inviting than Tatooine's Sarlacc pit.

Second Extinction is now free on the Epic Games Store

Second Extinction is now free on the Epic Games Store

Fortnite's Winterfest celebrations are up and running. Players can get 14 Gifts by visiting Sgt. Winter each day. The Gifts include two Outfits and a special third one.

Fortnite's Wintersday event is about to go live, but in the meantime, players got Update v19.01 that introduced some balance changes and fresh Super Level Styles.

Fortnite's Llama-Rama event collab with Rocket League Swideswipe is celebrating the latter's inaugural season with rewards in both games.

After Cubed, comes Flipped. Fortnite's Chapter Three Season One started with a slow rotation and brought a bushel and a half of new mechanics, weapons and more.

The Jumpman Zone and the Air Jordan XI ‘Cool Grey’ are coming to Fortnite today, December 1, 2021. The collaboration will offer a scavenger hunt and a bunch of challenges.

Epic teamed up with a couple of Fortnite fans to come up with examples of Party Worlds, a new feature that will let players submit their original ideas.

Fortnite will close out Season 8, Chapter 2 with a one-time-only showdown event between the players and The Cube Queen. Those who defeat her are looking at some special rewards.

Fortnite v18.40 brings fresh weapons to the War Effort. The hotfix also set the stage for the upcoming Strike from the Shadows week mini-event.