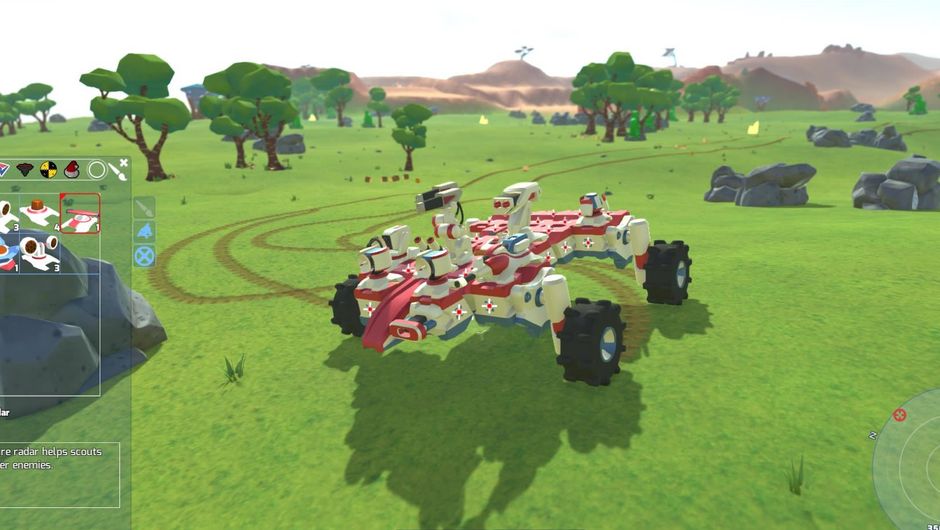 TerraTech, Some skidmarks there buddy.

So we all played with Legos or similar blocks when we were kids, but there was always one disgustingly rich kid who had the latest Star Wars set. Well, put all those blocks combined and you're scratching the surface of what TerraTech is.

At its core, TerraTech is a block-building game. Before you know it, you'll be creating anything from sophisticated wonder-techs to Frankenstein-ish monstrosities that can barely move, while you're droning on about how you'll fix it in the mix.

TerraTech throws you into what Payload Studios call "hostile alien landscape", which is totally uncalled for since the game world is a whimsical and relaxing place. Exploration is a treat both visually and gameplay-wise. Oh yeah, there's hostiles. Fair enough then, it might be hostile.

Your humble beginning will quickly grow into a full fledged operation under guidance by the big four, i.e. four corporations that will send you on missions. Crafty Mike from GSO, Big Pete from GeoCorp, Suzie from Venture and spec ops Sergeant Smash from Hawkeye will be rewarding completed missions with more blocks, ensuring that you get a proper fix of whatever you came for.

You prefer racing over harvesting? No problem, focus on Venture and you're good to go. Payload Studios struck a perfect balance between the things you ought to be doing and things you want to do, leaving you free to choose how quickly you'll progress and in which direction.

As you prosper on merciless exploitation of a procedurally generated native alien countryside, your vehicles will be the first to show progress. Bigger and better batteries will let you bring shield/repair-bubble generators with you, meaning more action and less downtime repairing. If you think you've seen it all though, you haven't - TerraTech packs plenty of surprises, even 50 hours down the line. 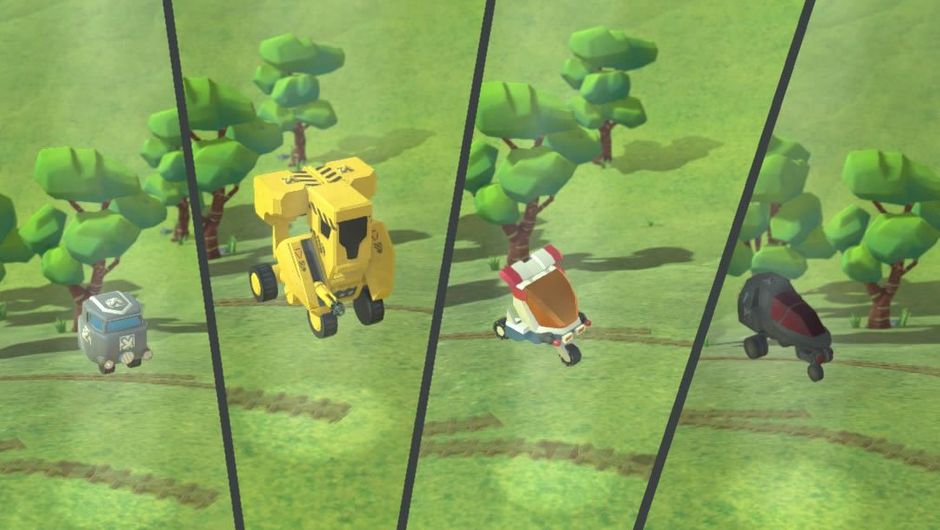 It all starts with your cab, which is the control block that's at the heart of every misshapen construction you make. At first, you'll command the unremarkable grey GSO one, until you've earned the stripes for the rest. No worries though, because I've learned that the difference is mostly cosmetic. Mostly.

As you complete missions handed to you by the big four, you'll get more cool blocks to play with. GSO are standard run o' the mil blocks - nothing to email home about. GeoCorp, the yellow ones, are  monstrosities built for mining and heavy duty weaponry, i.e. .

Venture blocks are the colourful ones and they're best used for racing and flying. Not very durable though. Hawkeye blocks, my personal favourite, are durable yet light enough, with plenty of contact points even on their batteries. And they really look cool, don't they? 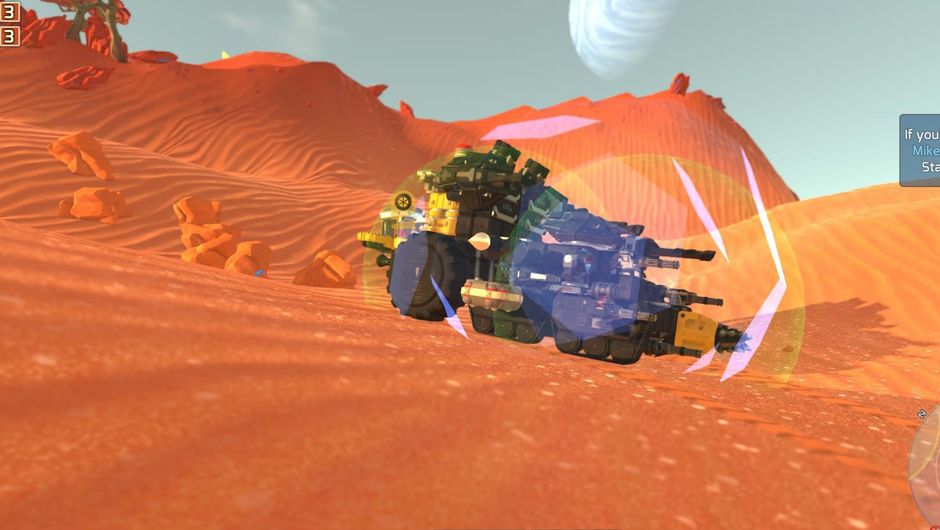 In the field, some of my vehicles worked like a charm. Other times, I learned why not. I'll tell you one thing though - losing your blocks to some future NPC candidate burns almost as much as it did in childhood. You know that feeling - dude, I just got them, c'mon. Help? Somebody? Anybody? Oh well.

Having learned all there is to learn, I set out to design my magnum opus, the perfect killing machine. I put a bunch of fuel cells in the centre, interspersed with batteries, with the weight offset by the wall of jet engines in the back. Gratuitous amount of firepower. For protection only, of course. Long range protection artillery. Let that sink in. 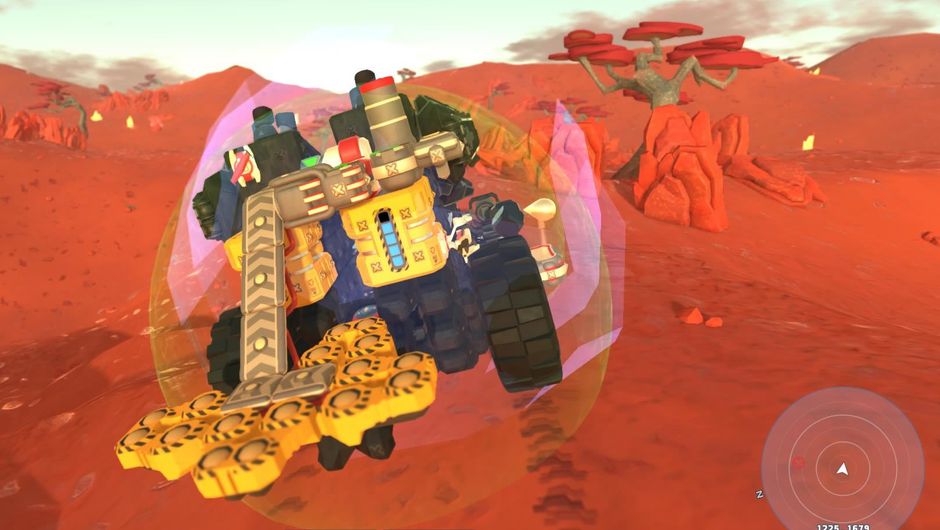 After routinely dispatching a few large test subjects, I notice one little guy heading for my newly established factory. I was packing like never before though and having just wrecked a few of his giant colleagues, the puny AI weakling was an inconvenience, at best.

And then, an absolute disaster in a matter of seconds. A single lucky projectile hits the only exposed part of my tech. It only blew up a fuel tank. Which then blew up neighbouring fuel tanks. Which then blew up jet engines. Which blew up the weapons. And batteries. And a bunch of hard earned blocks. My pride was long gone by then.

Me, a mighty architect, high tailing it from a GSO AI peasant I thought to myself as I was scrambling for safety, rocked by violent explosions that would've spelled the end had there not been for shield and repair bubbles. What I failed to appreciate at the time was what was left, because it served as basis for my magnum opus mark II. What managed to survive that ordeal was never moved and rendered my mark II a pure beast. 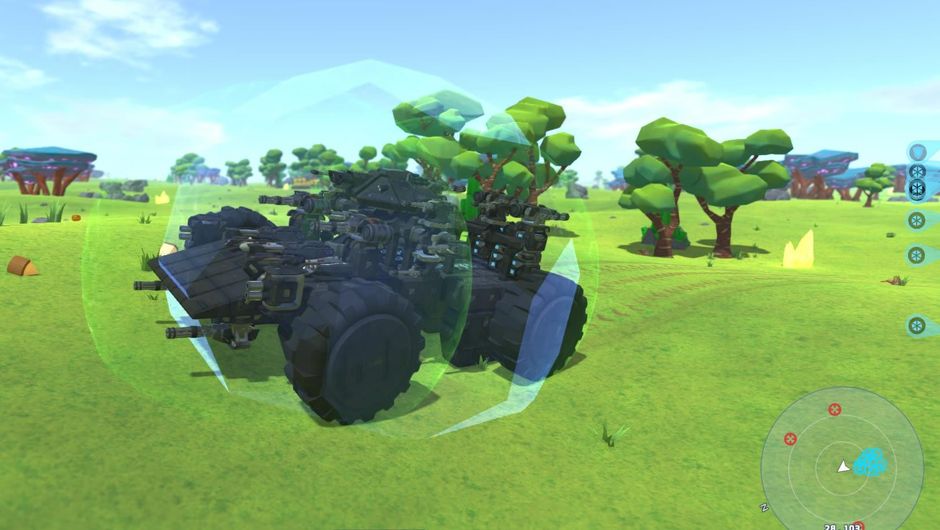 TerraTech isn't just about building vehicles - you'll be getting all sorts of anchored techs for crafting, refining, selling, etc. Different conveyor belts can streamline your production lines to insane levels. Like I said, Lego ain't got a darn thing on TerraTech.

Snatching up anchored and mobile AI controlled modules lets you construct stationary defence turrets and mobile, self-driving techs. Awesome - more time for the fun stuff. TerraTech lets you snapshot and share designs, which is a valuable resource when starting out with base building. Possibilities are as endless as they are satisfying. 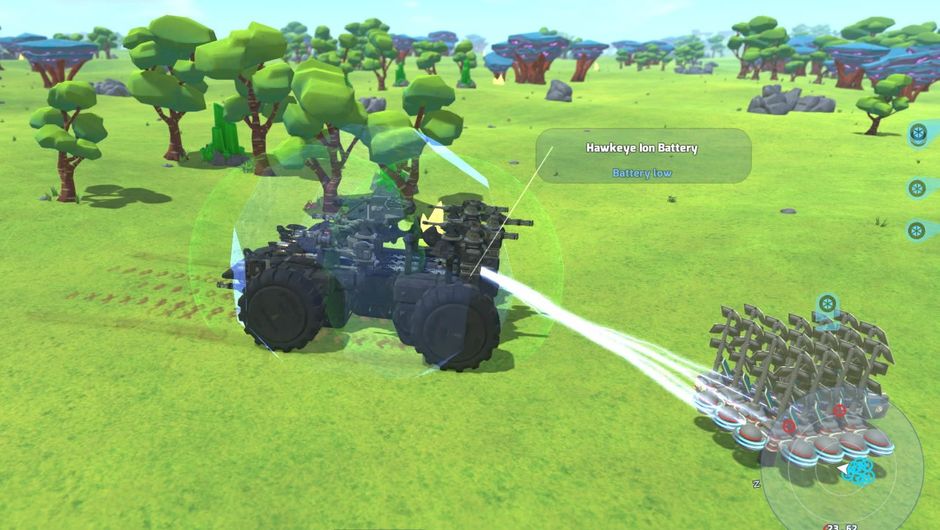 You'll probably be tempted to look up and borrow tech designs as well but trust me - don't. At least not yet because TerraTech does not revolve around flawless execution. Quite the contrary - everything that happens is a happy little coincidence that teaches you a valuable lesson. Fail often and you'll know what success is. And it will be sweet. 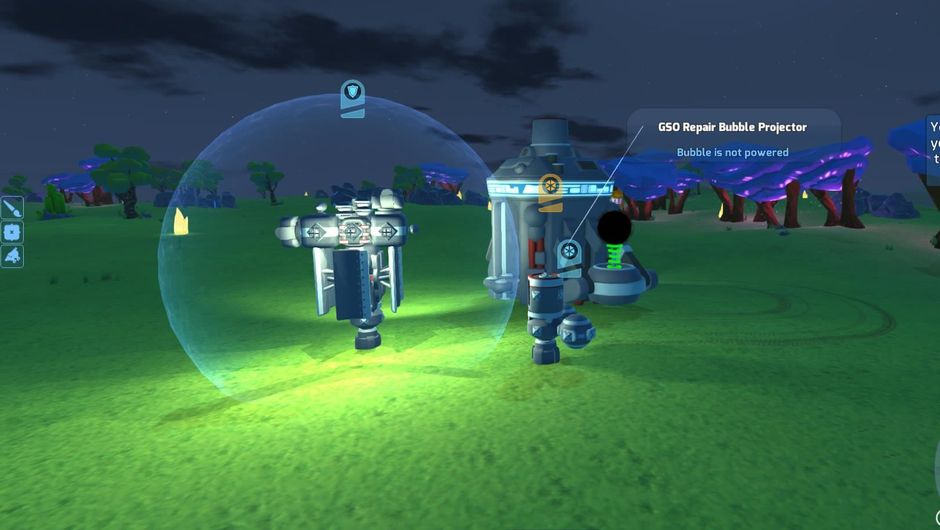 Earning and strapping a mobile refinery and delivery cannon to the Waagh, as I've grown to call the mark II, made me feel like a king. I immediately disbanded every non-mobile facility and went full nomad. Drive. Shoot. Kill mechs. Earn coin and replenish batteries while doing it. Life on the road bro. While doing so, I unwittingly saved myself some late game FPS, but more on that later. 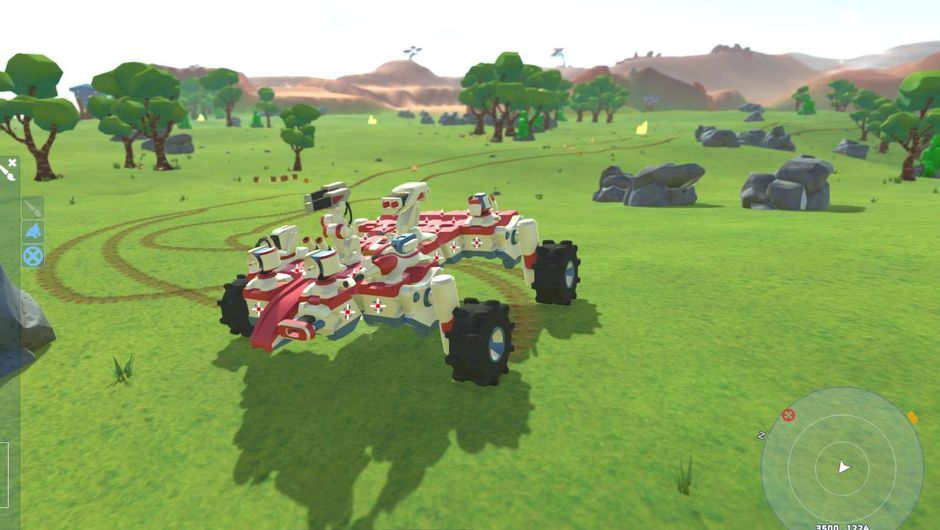 TerraTech's music is made by Dave Dexter Music and he did a magnificent job that I've been immersed in for a while now, in-game and out of it. Entrancing gospel and country notes gracing unobtrusive chord structures, which creatively nod as much to Morricone as they do to King or even Jimmy - it's just perfect.

It has a distinctive note of loneliness and actual longing for home, which supports TerraTech's narrative better than any writing could convey. Truly top work that improves the game and provides for a memorable backdrop to what's already a fun game.

Now, we move onto the not-so-good stuff, which is actually a single thing - TerraTech's late game. If you're a good little capitalist who aspires for more and bigger, TerraTech loses a bit of steam towards the end, when you've already collected all the blocks there are. It's not a big deal though, since Payload is likely to be adding more for years to come.

When it comes to large production lines however, they tend to take a toll on the FPS in the final stages. More conveyor belts and machinery along with increasing complexity of enemy techs is likely to put a strain on lower end computers. Add a few AI controlled bots to this recipe and you've just found what seems to be TerraTech's only flaw - optimisation. 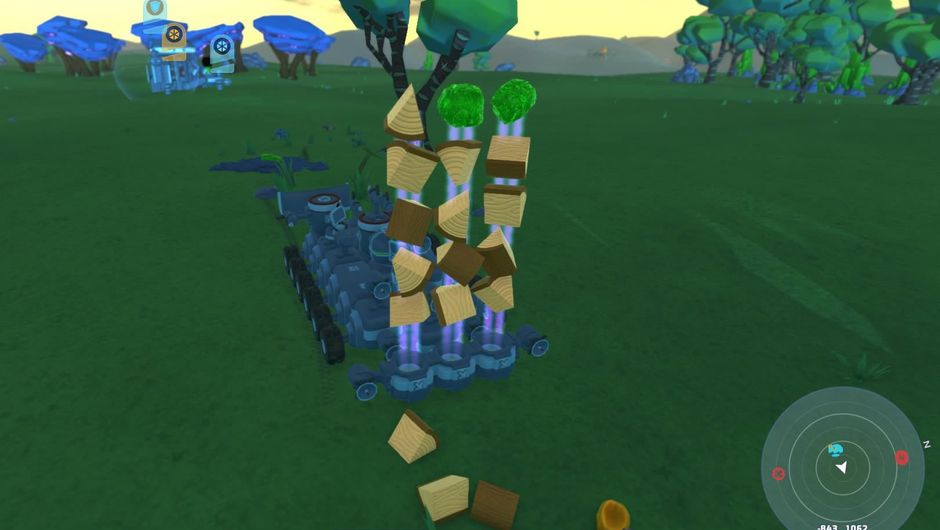 I ran TerraTech on Asus ROG running i7 4710HQ at 2.5GHz and Nvidia GTX 970M. It ran like a charm on 1920x1080 using the game's highest detail setting. My nomadic approach and the ROG's muscle made sure that the FPS drop was so miniscule it was negligent.

However, running TerraTech on a desktop running Intel Xeon 1230 v2, which is a carbon copy of the i7 4710HQ, paired with an HD 5870 told a different story. Initially, HD 5870 matched the Asus ROG, comfortably handling the game's highest detail setting. Well, that's until I completed some 65 per cent of the game, after which I ended up gradually decreasing the slider until there was nowhere left to slide to.

The fact that the endgame is already a bit anti-climactic, since you've got pretty much everything - could be forgiven. TerraTech is not a story focused game, so not much you can do via storytelling either. Optimisation, on the other hand, isn't beneficial - it's essential for a product players pay money for. 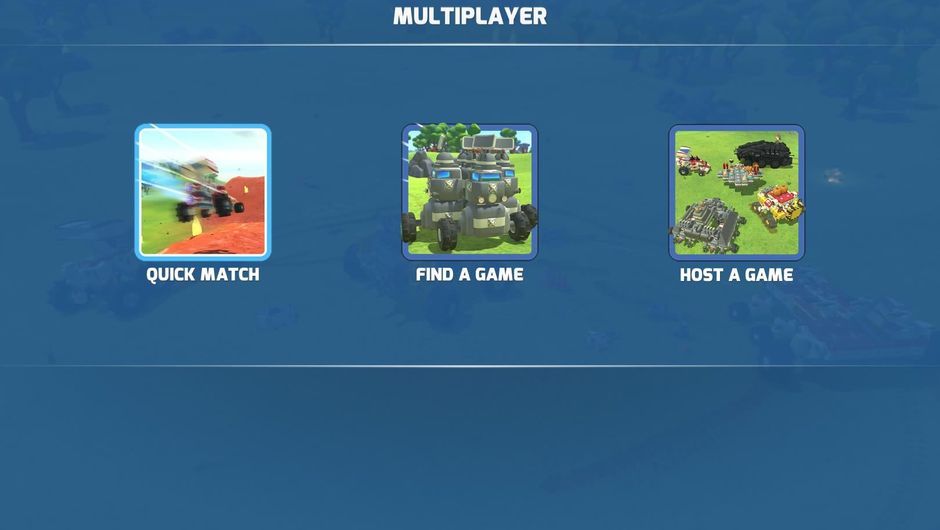 The game has an interesting PvP deathmatch multiplayer although in my very subjective opinion, it gets old pretty quickly. It's neither mechanically challenging, rewarding nor in line with the rest of the game's overall tone, but then again - this is a subjective opinion of a singleplayer lover.

Creative Co-Op mode on the other hand, is one of those features that should help TerraTech truly shine. Payload promised to look into some kind of shared story mode as well, because coding a co-op campaign is apparently impossible, but I have a feeling any co-op will unlock more unexplored facets of the TerraTech experience. 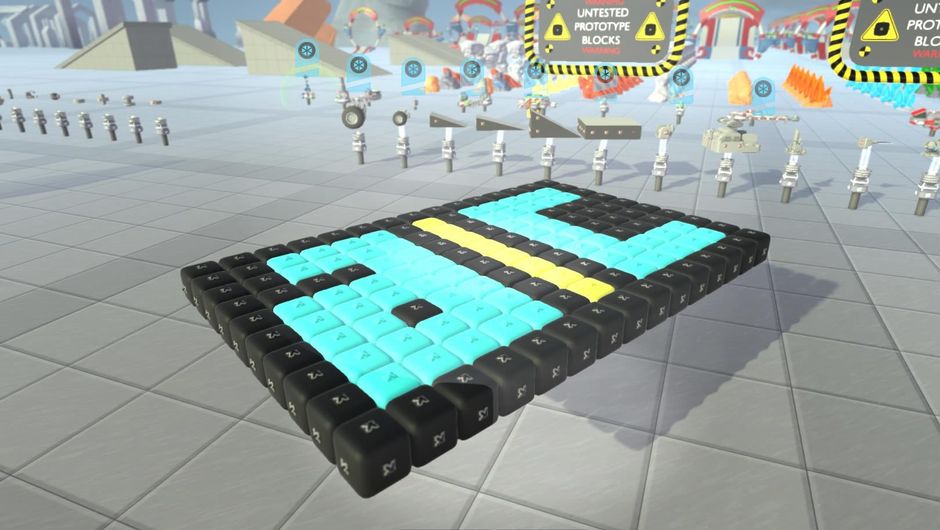 In conclusion, TerraTech is an incredibly pleasant, borderline meditative experience for children 20+ years past their bedtime. Its simplicity is only block deep though - TerraTech is as complex and fun as you want it to be, with loads of potential whatever road you take.

I told a colleague recently that this is the type of game Microsoft should bundle with Windows - it's fun and educational, which is a win in my book, no pun intended. While TerraTech is not without its flaws, most notably sub par optimisation, it's unlikely to be noticeable on higher end machines and can be circumvented on potato computers by cutting back on factory building. 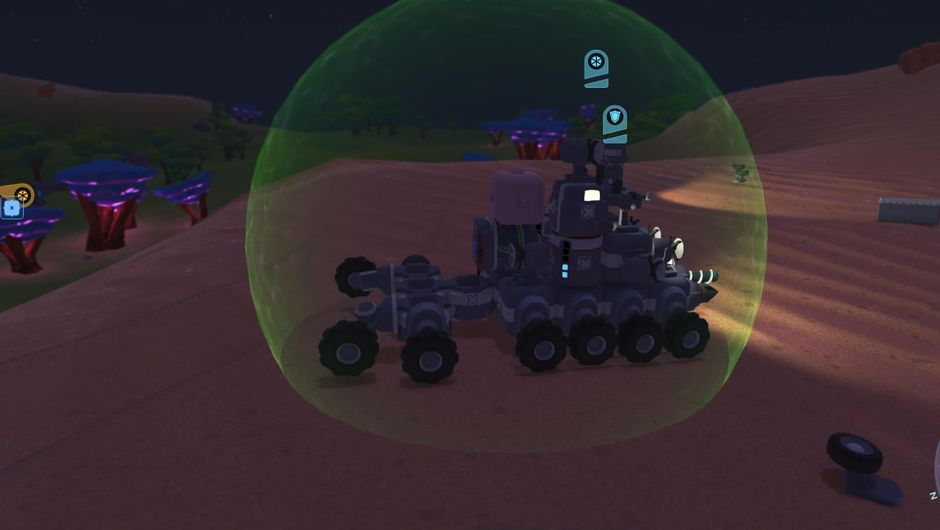 I'd normally love to tell you that buying TerraTech buys you 30-50 hours of guaranteed fun but with scores being the name of the game. I went with 7.6/10. I'd have given it a straight 8 had there not been for the optimisation niggles.

Having officially launched a month ago though, there's ample time to polish TerraTech to perfection. Already one of my highlights in 2018, I'd love to see it do well and hopefully review the sequel too, because TerraTech already deserves it. 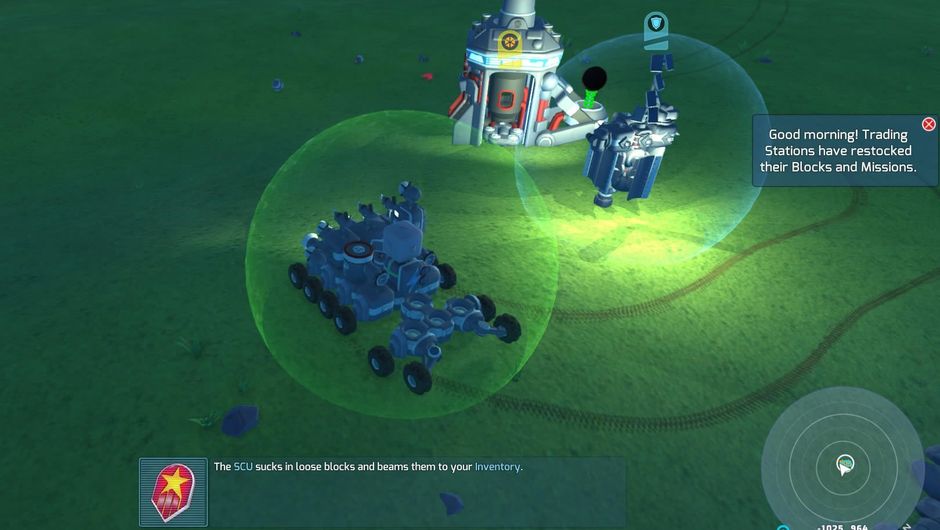