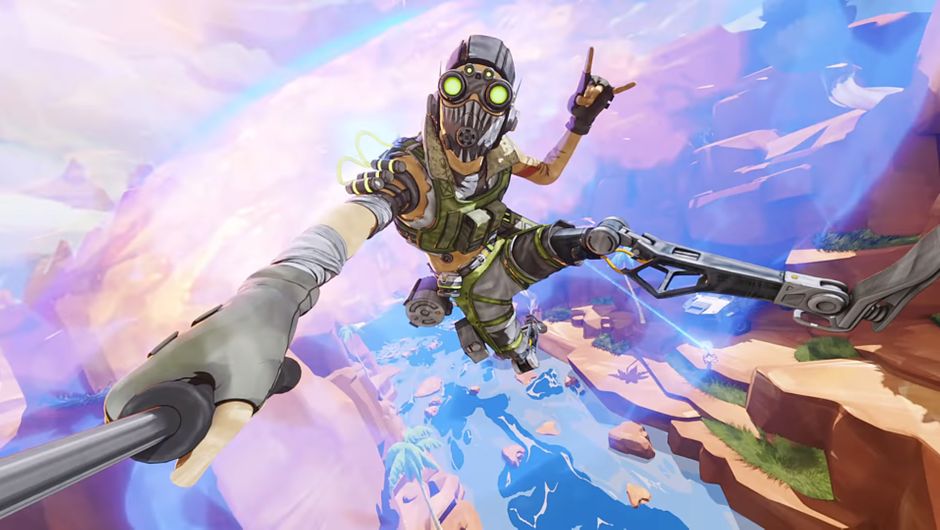 Rock on you delightful maniac. Rock on.

Octane is without question one of the most memorable character designs in recent memory, adding a distinct flavour to Apex Legends with a personality befitting a racing daredevil. Here's our guide to using his freshly tweaked abilities.

Where characters like Gibraltar, Wattson, and Caustic favour static defences and hunkering down at a set location, Octane leverages the intrinsic movement opportunities peppered through Apex's two battle royale spaces. Zip lines, sliding down hills, and leaping to victory are totally within his wheelhouse, especially when combined with a shot from his Stim and that wonderful Jump Pad.

His Swift Mend ability and rapid pace will appeal to the risk takers, and those enamoured with the notion of pressing the attack and flanking at the drop of a hat. With a significant buff to almost his entire move set landing amid Season 5's Lost Treasure collection event, there has never been a better time to take this lovable rogue out for a spin.

Respawn Despite a Gibraltar onslaught, Octane knows the right time to take a selfie.

Octane's Stim injector gives him a decent running speed boost, but it tended to be a little on the weak side, especially if the person you're chasing puts their gun away, thus increasing their own sprint velocity.

It always lacked a certain oomph, but now, not only has the Stim been given an extra 10% overall kick in the speed department, but you can now use it to get out of a tight spot where movement dampening affects are applied. Think Caustic's gas, or Wattson's fences; Octane can now break free of their restrictive grasp and reposition for an effective counter.

Try avoiding using it during traversal outside of combat. It can be so easy to burn off when there's open ground to cover, but Swift Mend isn't exactly dripping with efficiency.

You don't want to wade into battle having compromised your own health for the sake of making it up that one hill slightly faster. Save your Stim shots for those tight escape moments. The added bonus here is you're less likely to wander off from your team mates as a result.

The Launch Pad's new double jump applies to both Octane, and any other friendly legend who decides to launch themselves from it. It doesn't give much of an extra height advantage, but as a quick manoeuvring tool, it works a treat.

Always try deploying the jump pad from an already raised position; if you want sky high clearance and maximum flanking potential, you'll want to be able to quickly zip across to a nearby rooftop.

Its a more valuable tool than most realise, so hoover up those Ultimate Accelerants and keep yourself well stocked, because it can absolutely mean the difference between getting wiped out and making an efficient getaway.

Respawn He blew off his own legs as a result of boredom... Nothing else could possibly go wrong, right?!

Another best practice application of Octane's Stim ability is to dart horizontally between nearby cover points, repositioning constantly like a sort of fairground shooting gallery.

If you're engaging a team at medium range, it's a fantastic way to bamboozle (thanks Mirage!), and has the secondary benefit of serving as a delay / distraction tactic while your sneakier team mates engage in a dose of flanking.

Octane's value as a sort of canary down the mine cannot be underestimated, and if you find yourself getting pushed, there's always your Launch Pad to fall back on.

The official League of Legends website has released an interesting article where Riot gave their opinion on all the recent "delete Yuumi" community demands.

Mirage has been in dire need of a fundamental rework since Apex Legends first graced the industry. Here is a character dripping in personality but with fundamental flaws in his move set. Here's our brand new guide, following the Season 5 tweaks.

The shattering arrival of Revenant into the Apex Legends meta was met with a combination of narrative trepidation and intrigue, and yet if play time statistics are accurate, he often goes unused. Here's our guide to flipping that script.

Apex Legends has largely avoided the pitfalls of excessive tinkering (here's looking at you Fortnite and Warzone), and with the arrival of Season 5, Lifeline has been significantly altered. Here's our guide to best leveraging her new modus operandi.

Loba is the latest addition to Apex Legends' pantheon of characters, throwing in a fascinating balance of stealth efficiency and flanking aggression that once again reinforces the importance of sticking with your squad mates.

For all their efforts to ensure a momentum driven flow to most combat encounters, Respawn definitely threw an interesting wrinkle into the meta with the addition of Crypto. Here's some tips and tricks for everyone's favourite hacker.

Apex Legends continues to go from strength to strength, with an ever evolving meta, experimental new limited time modes, and a resurgence of interest. Here's some tips and tricks for using everyone's favourite French warrior, Wattson.