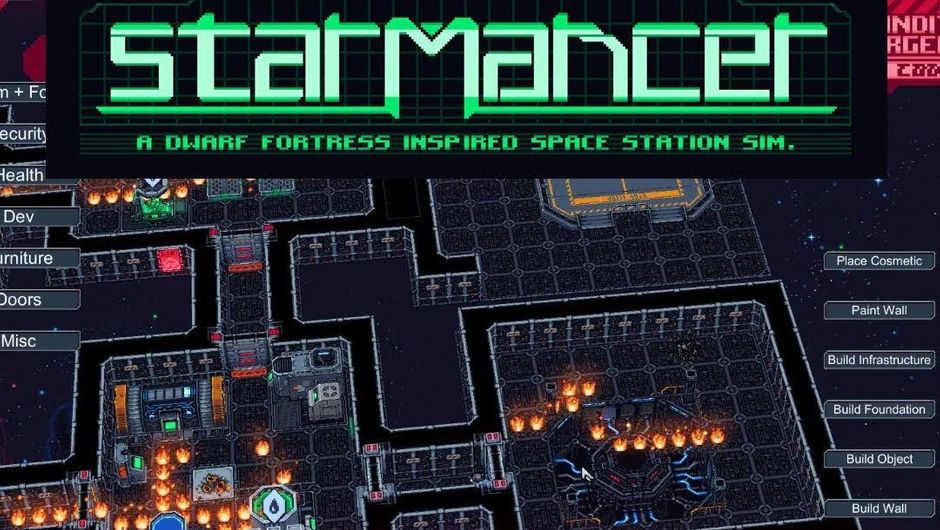 Starmancer is a base building space sim inspired by Dwarf Fortress. The game is in development by indie developer Ominux Games who caught the eye of Chucklefish who partnered up with them in order to publish the game.

Chucklefish have decided to publish the game, after finishing their works with Stardew Valley. This announcement was made on Chucklefish's official twitter that also mentioned Starmancer's Kickstarter campaign.

They are currently standing at £70.555 or $98000 with three days before the campaign ends. It is more than likely to reach the next stretch goal which is Creative Mode that will allow players to switch between Creative and Survival mode. It will likely serve as a map editor, with an added function of creating custom adventures.

Starmancer's Kickstarter has another two stretch goals left, which will add robots and alien races to the game, should they be reached. It would definitely be an interesting addition to the game's storytelling. Speaking of which, the premise of the game is that the Earth was destroyed and the remnants of human kind fled into space, inhabiting ships named Arks.

You assume control of a Starmancer, one of the volunteers who merged their minds with AIs and are in charge of maintaining the stations. That includes expanding the Arks by building additional cells, keeping your population happy, gathering resources and, uh, literally growing the population.

This is very practical in case your Ark gets invaded and some of the colonists die. You can just grow them again instead of waiting for nine months. The game doesn't have a confirmed release date yet. It is estimated to be finished in January 2019 and Ominux Games noted that their newfound partnership with Chucklefish will not impact it negatively.

The newest FarCry6 leak, that appeared online on July 10, 2020 shows a host of details about the game, including the main villain's identity and the expected release date of the game.

The newest FarCry6 leak, that appeared online on July 10, 2020 shows a host of details about the game, including the main villain's identity and the expected release date of the game.

No Gravity Games' puzzle platformer with a dash of horror titled Creepy Tales is available on Switch. The game is available for 7.99 EUR/USD for a limited time.

No Gravity Games' puzzle platformer with a dash of horror titled Creepy Tales is available on Switch. The game is available for 7.99 EUR/USD for a limited time.

With seven days left until Ghost of Tsushima starts slicing enemies around, and about four until the review embargo is up, PlayStation 4 owners can start their preloads.

With seven days left until Ghost of Tsushima starts slicing enemies around, and about four until the review embargo is up, PlayStation 4 owners can start their preloads.

Battlefield 6 teased as a reboot, set in the modern day11

Battlefield 6 teased as a reboot, set in the modern day

EA's next Battlefield game could be a reboot set in the modern-day according to the latest tease from a reliable leaker. The modern-day setting has been rumoured for Battlefield 6 for quite some time now and it looks like these rumour may be true after all.

Overcooked! 2 fans will soon get to play a new DLC. The Sun’s Out Buns Out DLC will bring new chefs, recipes and five new destinations. Carnival of Chaos’ sauce dispensers are coming back.

Microsoft Flight Simulator 2020 closed beta date will finally be revealed on July 9, 2020, the devs confirmed in the latest blog post. The closed beta is still on track to release later this month.

Party Crasher Simulator has now been officially announced for PC, Switch, PlayStation 4, PlayStation 5, Xbox One and Xbox Series X. The game will let its players disrupt all kinds of parties.

Stronghold: Warlords will feature a Free Build mode. The mode will let the players build their castle and its accompanying features unhindered by an enemy Lord.