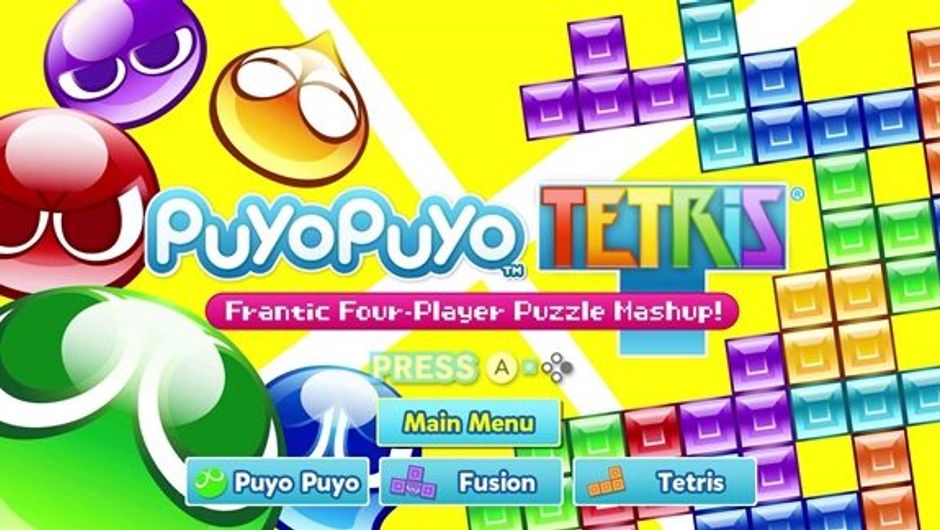 The interface of the game is perfect - just the way it needs to be.

With Puyo Puyo Tetris being out on the Nintendo Switch, we take a closer look at the game and what it has to offer. Check out our video to see our in-depth review of this new Tetris title.

Another new console, another Tetris game. Puyo Puyo Tetris is developed by Sonic Team of Sega. The illustrious creators of Sonic The Hedgehog, Nights Into Dreams, ChuChu Rocket and Phantasy Star Online. In the 90s this development team reigned supreme but was never heard of since.

Sega The game was developed by Sonic Team - the creators of the renowned Sonic the Hedgehog. 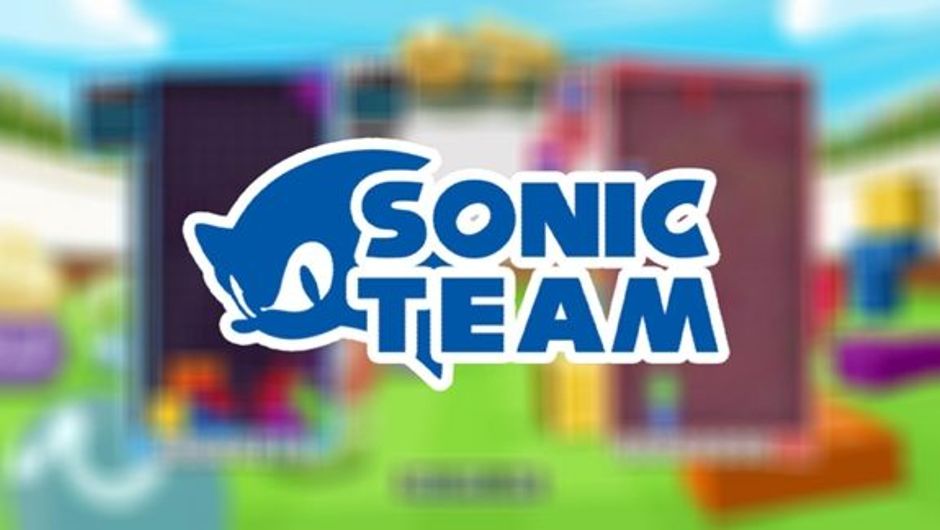 Western audiences will immediately recognise the name "Tetris" and understand what the gameplay involves, because we have all been playing the same game since 1984. Puyo Puyo, however, will be new to a lot of people as there hasn’t been a Puyo Puyo game released outside Japan since Puyo Pop Fever in 2004.

For the sake of clarity, in Tetris you move Tetrominos around to get 10 blocks in a line so that they disappear - shower, rinse and repeat. It’s simple gameplay but heavily addictive and part of the popular culture around video games. So much so, that there have been psychological studies into the game that have led to the coining of the term "Tetris Effect", for people devote so much time and attention to an activity that it begins to pattern their thoughts, mental images, and dreams. 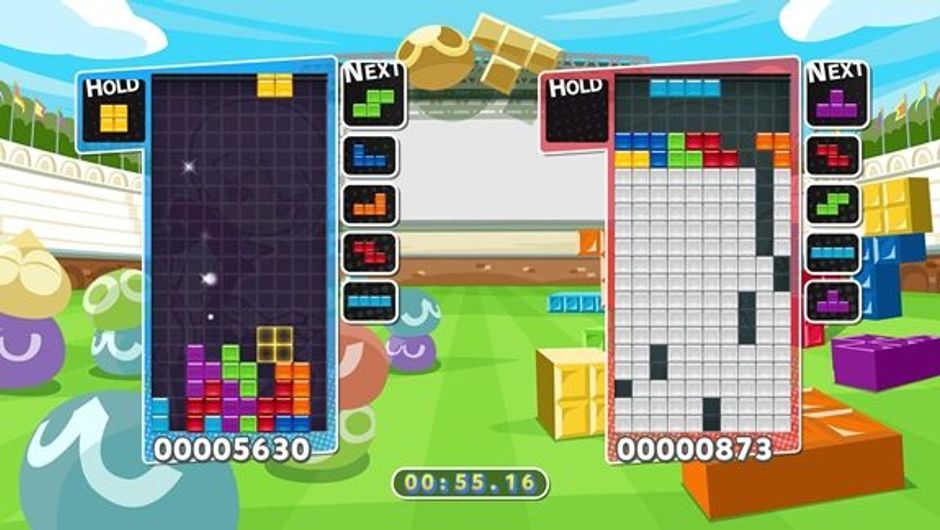 Puyo Puyo is still also a puzzle game but works differently. You match different colour Puyos so that four of the same line up and explode. It sounds simple enough but the playing the game is incredibly complex as to be really successful you have to create large chains for combos and more points.

Even though this is a puzzle game, there is actually a story mode. The worlds of Tetris and Puyo Puyo are being combined into one. You play as characters from the Puyo Puyo world and Tetris world as they seek to discover the cause of this.

You do this by playing games of Puyo Puyo and Tetris, sometimes to defeat enemies, but mainly to calm down each other. Apparently beating a six-feet tall anamorphic chihuahua at Tetris is how you calm him down. Who knew.

Sega The story of Puyo Puyo is not executed in the best of ways. 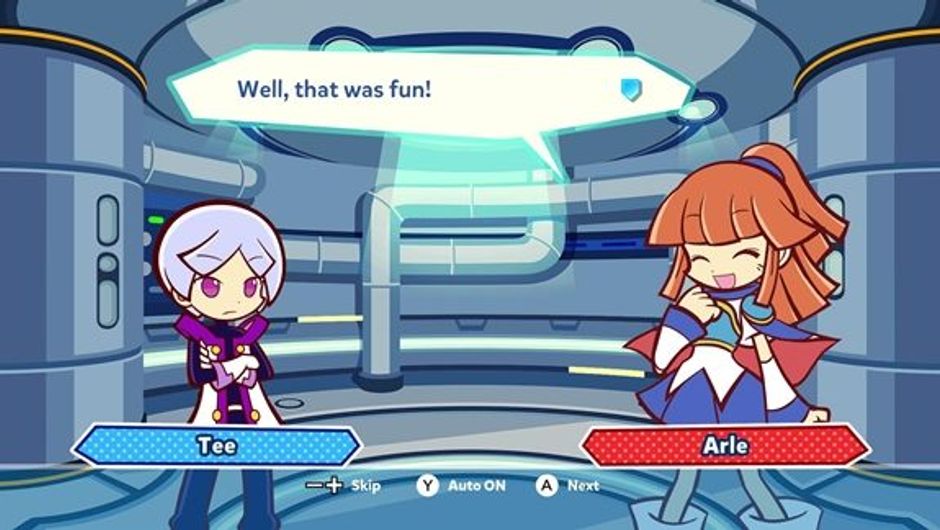 The story mode is unfortunately one of the problems with the game though. The plot isn't really gripping and exposition is done by still pictures with text, typical of Japanese games. The main problem is that they constantly repeat many plot points over and over again. It doesn't really further the story and just seems to stretch out time. For many points in the game, I was sitting there just going, “I get it. Can I play Tetris now please?”

Luckily there's a wealth of game modes to keep you occupied.

Players are getting value for their money with this game. There is the standard mode of playing a game of Tetris or Puyo Puyo on their own. But there's also the option of playing them combined in Swap Mode. After a set time, the game swaps from Puyo Puyo to Tetris and vice versa. Players can perform mixed chains by clearing puyo or lines before swapping, and then chain with the current field. A great mode that ensures that you don’t just play Tetris the whole time. 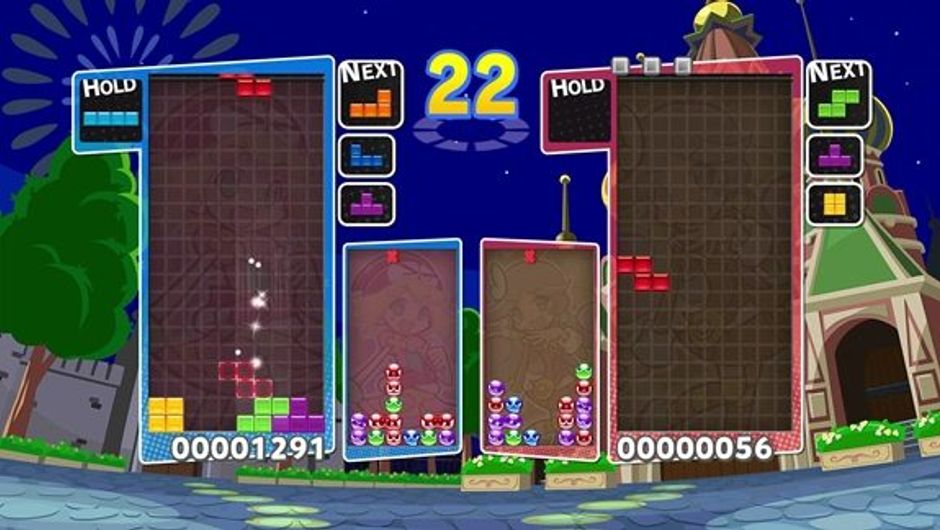 In Fusion, Puyos and Tetrominos are dropped into the same puzzle field, allowing for mixed chains when clearing Puyo Puyo chains and Tetris lines consecutively. Tetrominoes sink down, with any coloured Puyo appearing back above. This is the most confusing mode I have played. I put a fair few hours into this and still I can’t figure it out. The complexity is astounding, but it’s good to know that there is a mode I can work on. 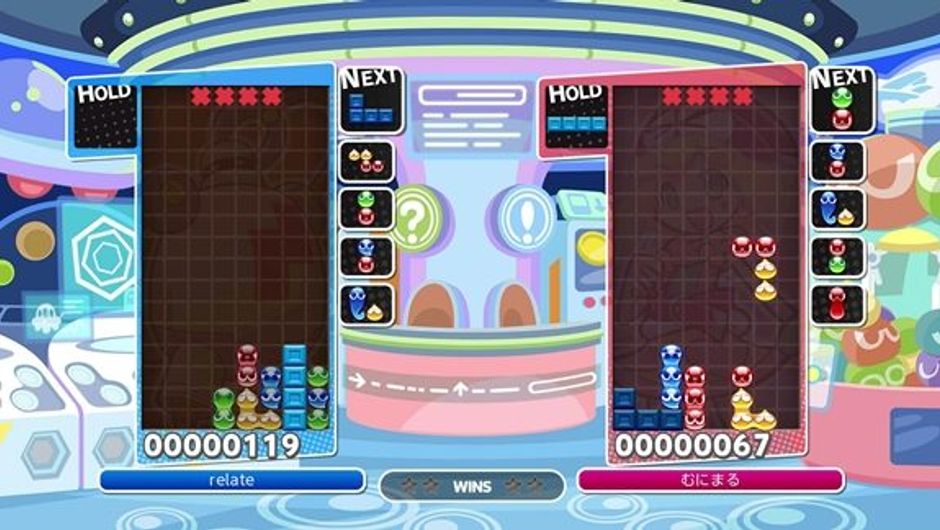 Big Bang mode is like a quick challenge mode to test your reaction times. If the players fail at clearing a field they will be given a smaller stack of Puyo or Tetrominoes; if they succeed, they are given a bigger stack. When time expires, all the garbage created will form a "Big Bang". The player who generates more garbage will damage others. When a player's field shatters, the player is eliminated. The last player standing wins the match. 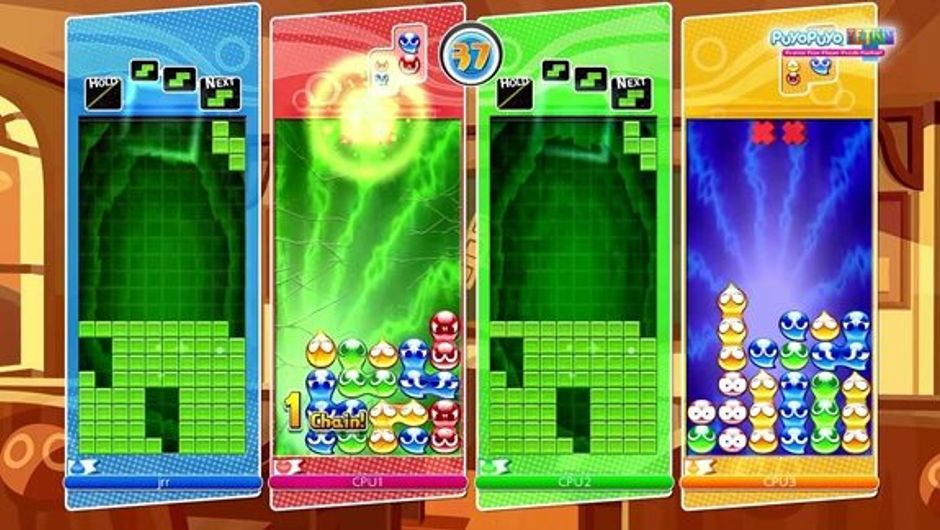 Party Mode is all about the special items. It’s a standard versus game of Tetris or Puyo Puyo. But by clearing these items you could get a special attack or performance enhancements. There is infinite lives so this one is all about score chasing. 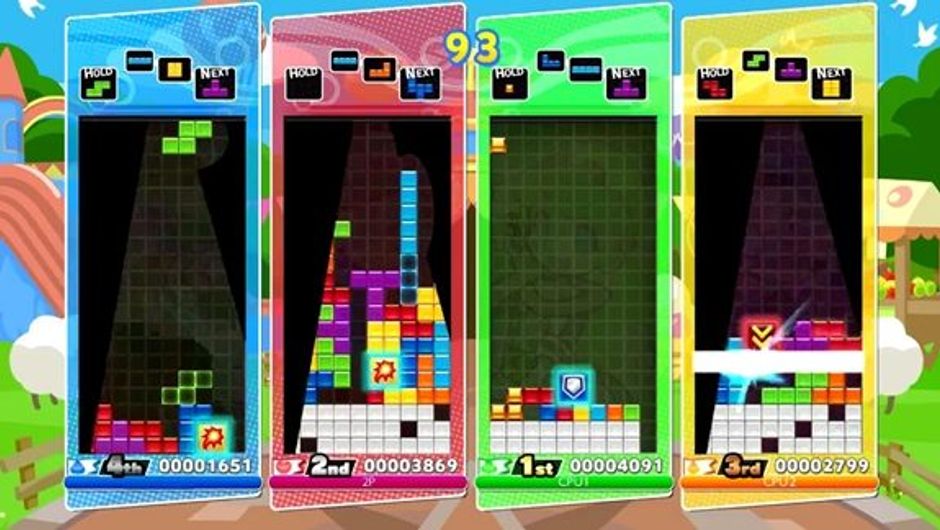 It’s this wonderful mix of different modes that keeps the gameplay exciting for players. All of these modes can be played online and offline up to four players. And if you don’t have any friendsm, the AI is actually quite good, with a range of difficulties that make the game easy or challenging.

I don’t normally talk about the interface of this game but an award needs to be given to this game. On the first title screen there is the option to go into the full menu or just play a game of Tetris, Puyo Puyo or Fusion - perfect! It’s simple and effective and shows that developers know what the players want. If you just want to play a game, you'll be in one in less than 30 seconds.

Sega The interface of the game is perfect - just the way it needs to be.

The controls of the game work well on the Switch whether in docked or portable mode. There is no lag and you always feel like you have complete control. You put a piece the wrong way? That’s on you.

There are different preset layouts you can pick, but unfortunately there's no option to fully customise the button mapping.

Sega You can choose from a number of different preset layouts. 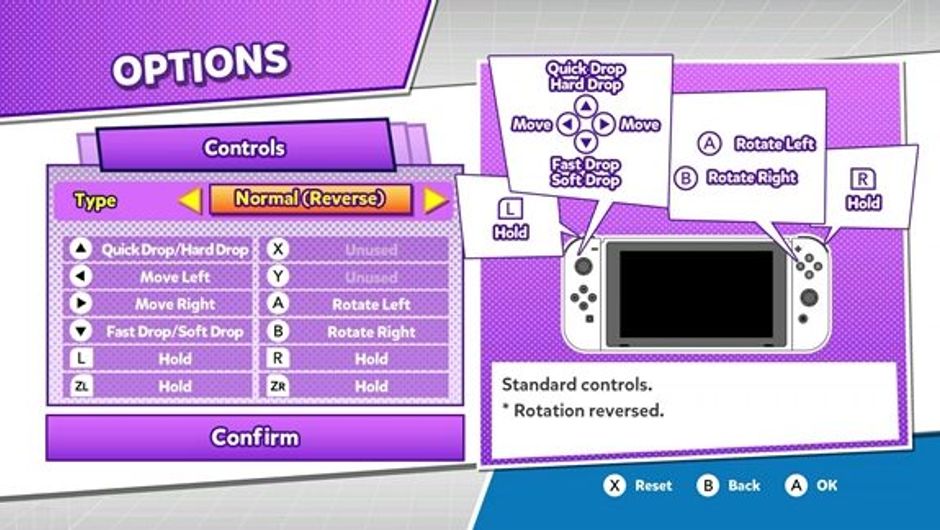 The graphics of the game are wonderfully bright and clean using a solid anime aesthetic. However, due to the actual gameplay of the two puzzles games, you don't really get the chance to enjoy it. There are different backgrounds, but these just blur around your vision as you are focused on the puzzles.

Sega The graphics, while clean and bright, don't really add much to the overall experience. 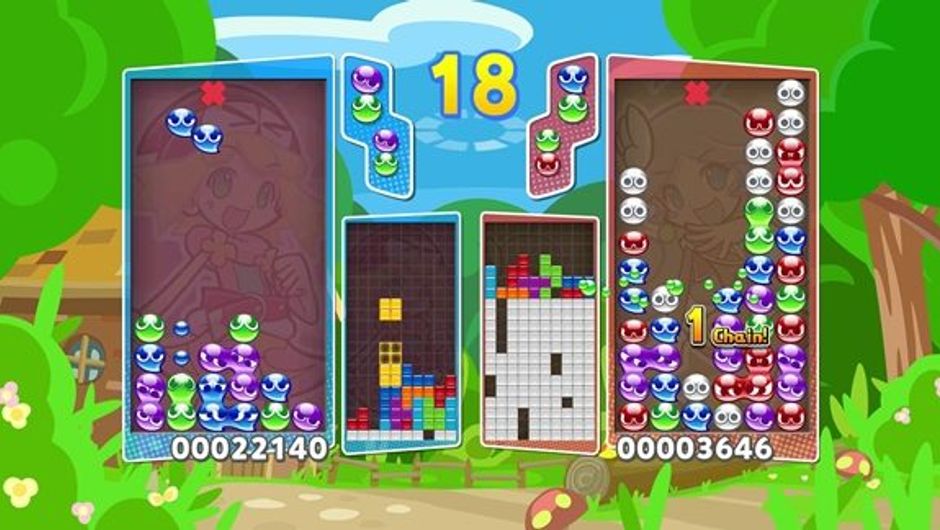 Thankfully, they aren’t impactful enough to distract you from your game. You can unlock different designs of Puyo Puyo and Tetrominos as you play the game. This nice little feature ensures you will be getting the visual cues that work for you.

The music of the game is a basic affair. Nothing too memorable, it just serves the correct purpose of blending into the background and not offending your ears. This also applies to the general sound effects and voice-overs in the game.

Sega You can purchase alternate voices for the game's characters. 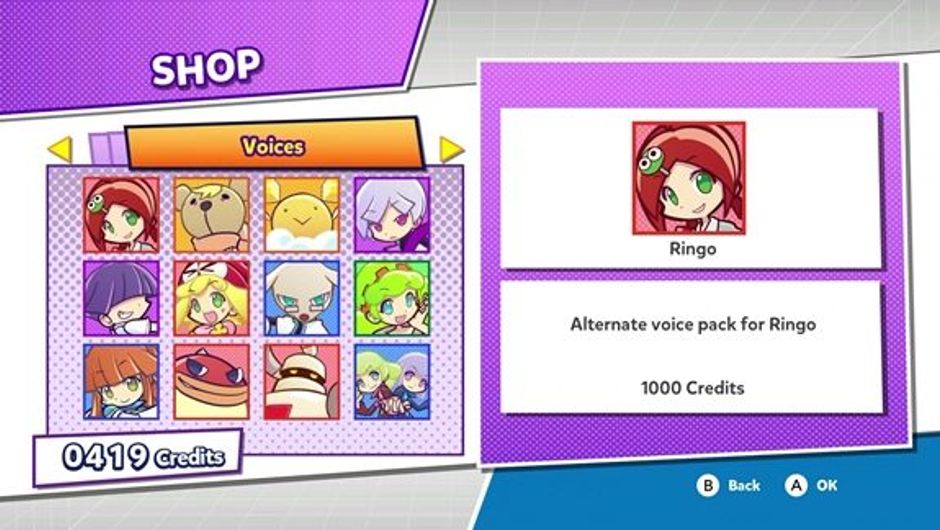 Each character has a unique voice and phrases when they are performing combos. After a whole you will become attended to these and recognise what they mean. This allows you to not have to check to see what monstrosity is going to happen. If you hear someone shout, "Tetris!" - you better be worried.

Puyo Puyo Tetris is a great game to have in your Nintendo Switch library. It has fantastic gameplay that does not need tweaking, just little extras that Sonic Team have done a good job of.

Nintendo The best way to enjoy your games, wouldn't you say? 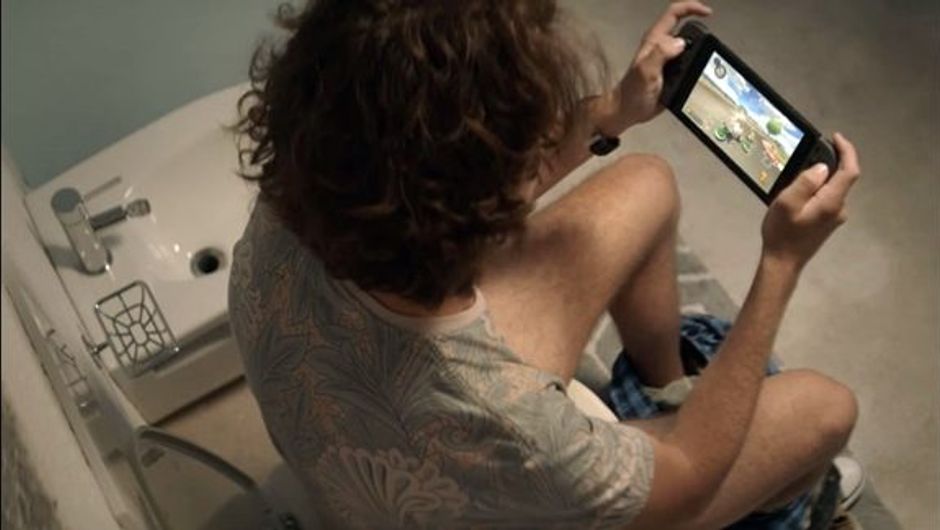 So, 27 years after the release of Tetris on the Gameboy you can still play Tetris on a Nintendo console while sitting on the toilet. As God intended.

Company of Heroes 3 is officially launching on November 17, 2022, exclusively on PC, Relic Entertainment and SEGA announced.

Nacon and Teyond launched the first gameplay trailer for RoboCop: Rogue City and it appears fans loved every bit of what they could catch in the video.

Harvestella is set to release on November 4, 2022, and it brings seasonal changes, crop growing but also dungeons, combat and more.

Mario + Rabbids Sparks of Hope is launching on October 20, 2022, according to a leaked release date on Ubisoft Latin America website.