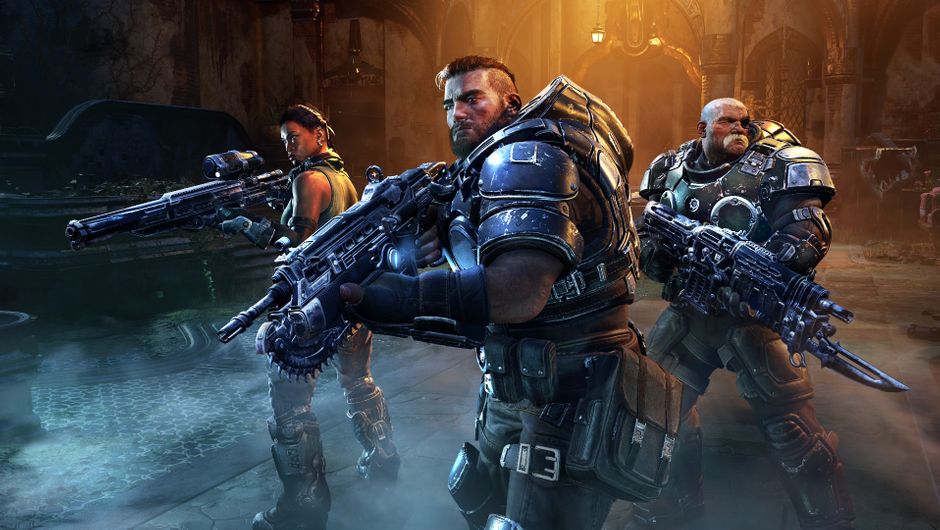 Shout out to the Retro Lancer. It doesn't get enough love.

Gears Tactics is a curious proposition, but one that now feels surprisingly essential given the splendid efforts of developer Splash Damage (in cahoots with franchise custodians The Coalition). Rev up your chainsaw for a turn based good time.

You could be forgiven for questioning the viability of this turn based spin off; Gears has long since defined itself as a snappy cover shooter, with a Gnasher-tastic competitive scene that favours twitch reactions and grandiose plays.

The deliberate pace of a top down strategy title is hardly the logical next step, and yet Gears Tactic's manages to subvert your expectations at almost every turn. Once you overcome any preconceived notions, you'll find it tremendously hard to put down.

One of the most striking elements is the effort made to make Tactics feel integrated into the existing narrative, whilst simultaneously double down on the more nuanced storytelling from Gears 5.

As a prequel, and featuring a leading character directly related to 5's main protagonist, there's a sense of history and relevance to each cut scene which rewards both long term fans, and satisfies newcomers simply looking for a decent yarn.

We won't spoil anything here, but suffice it to say, we were surprised with how much emphasis is placed on providing context for each mission, and how it contributes to the overall arc.

It was also incredibly gratifying to see the same high level of production value throughout, with full motion captured performances elevating the material beyond "unexpected side quest".

Where things really kick into gear (sorry) is in the tweaks to traditional turn based gameplay. Yes, you have a set numbers of actions per turn, special moves with associated cooldowns, and the ability to provide "overwatch" of a particular area to establish suppressing fire when the A.I. makes its next move.

So far, so XCOM. Executions, a staple of Gears combat, introduce a much greater risk / reward dichotomy to proceedings, offering a bonus action for your entire squad should they be performed successfully.

It encourages you to push forward and press the attack in a manner reminiscent of the mainline titles, whilst forcing you to consider your position and whether retreating into cover is the more viable choice.

The option to initiate another action for a friendly second squad mate, while your first is still completing their own movement, also injects much needed pace, and given that enemy combatants aren't shy about making bold moves, you'll never be far from the action.

The closing moments of certain scenarios don't always work, with long walks back to extraction that feel needlessly drawn out. There's no tension of combat or balancing of your actions required here; just lengthy jogs back to your vehicle that feel superfluous.

This is an exceptionally well optimised title, with a huge amount of PC specific tweaks, and even a benchmark test to stress out your ageing GPU. Visually speaking, Gears Tactics looks on par with the most recent, current gen console instalments. Character animation is superb, and all your favourite executions and enemy types are present and accounted for.

Cut scenes look incredible, with excellent facial animation and voice acting that continues to be remarkably nuanced for a series infamous for embracing "dude-bro" sensibilities.

The music is fairly run of the mill here, sticking perhaps a little too close to previous entries. Playing it safe is OK to a certain degree, but it's mostly forgettable.

Splash Damage Just chuck a grenade in his gob. That should work, right?!

Gears Tactics is a confident and well realised spin off that makes for an ideal entry point for gamers dipping a toe into turn based action.

Gears Tactics is available now, for PC. An Xbox One version is also in development.

Digital Extremes revealed that Deadlock Protocol will arrive to Warframe soon but only gave a release window as opposed to an actual date. It will rework some older stuff and bring freshness to the game.

Digital Extremes revealed that Deadlock Protocol will arrive to Warframe soon but only gave a release window as opposed to an actual date. It will rework some older stuff and bring freshness to the game.

Twitch and SNK Corporation teamed up for cross-promotion of the former's subscription and the latter's classic games as the service will offer 22 titles, with the first batch starting next week.

Twitch and SNK Corporation teamed up for cross-promotion of the former's subscription and the latter's classic games as the service will offer 22 titles, with the first batch starting next week.

BioShock fans became ecstatic after the teaser website went live and theories have been flying all over the place. One particularly interesting finding hints at a possible announcement before July 6, 2020.

BioShock fans became ecstatic after the teaser website went live and theories have been flying all over the place. One particularly interesting finding hints at a possible announcement before July 6, 2020.

People Can Fly's upcoming looter shooter, Outriders, will get several gameplay videos over the next few months, with the first one set to premiere on May 28, 2020.

People Can Fly's upcoming looter shooter, Outriders, will get several gameplay videos over the next few months, with the first one set to premiere on May 28, 2020.

Bohemia Interactive, the creators of DayZ have shut down their Bratislava Studio after several resignations from senior and lead developers, new rumour claims. Apparently, all that is left on DayZ is no more than ten people in Prague team.

Obsidian camo is the new Mastery Camo in Call of Duty: Modern Warfare and Warzone11

Obsidian camo is the new Mastery Camo in Call of Duty: Modern Warfare and Warzone

Gears 5 continues its hot streak of free content updates and meaningful additions with their latest drop, Operation 3: Gridiron, and it's easily their most well balanced and complete package to date, with a fantastic new mode.

Franchise custodians The Coalition overhauled Tour of Duty progression in Gears 5 for its third Operation (Gridiron). In this guide, we break down a few different approaches that can significantly increase the speed you level up.

XCOM: Chimera Squad has turned around from announcement to release in record time, dropping in amongst a sea of delays and uncertainty to deliver a consistent, subtly tweaked take on turn based strategic action that ticks all the right boxes.

Gears Tactics is just around the corner and while we wait for Splash Damage's title we have a brand new trailer to look at. It is the official launch trailer for the game showcasing enemy types, different strategies and characters.

Two years after release, Total War: Warhammer II is more popular than ever

Two years after release, Total War: Warhammer II is more popular than ever

Creative Assembly's strategy Total War: Warhammer II has reached a new record in peak players over at Steam. Two years and seven months after its release the game has hit 84,254 players, its highest peak ever.

Electronic Arts have announced some nostalgia-worthy news, where they'll be releasing the source code for two of Command & Conquer franchise's classics - Red Alert and Tiberian Dawn.

Total War: Warhammer II is getting a hefty update that comes alongside The Warden & The Paunch Lords Pack and focues on the Eye of the Vortex and Mortal Empires campaigns.

In their latest roadmap for Flight Simulator 2020, Microsoft have officially confirmed that a closed beta test will be hosted in mid-July 2020. Before that, the game will have two additional Alpha tests.

Paradox Interactive released a new trailer for Crusader Kings 3 along with the game's release date and the ability to pre-order. It seems like a success so far, since the game is selling like hotcakes on Steam.