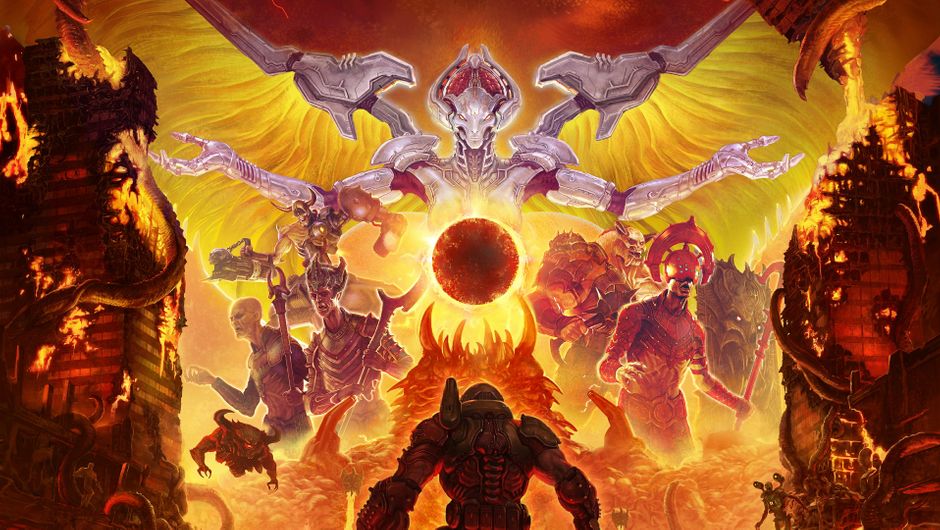 You know the old saying. If at first you don't succeed... chainsaw them in the face.

DOOM Eternal revels in chaos, indulging aggressive forward momentum and empowering you at every turn. The no frills, "does what it says on the tin" approach hearkens back to a simpler era, but with a smoothness and polish that helps deliver the goods.

Following the wildly successful 2016 reboot, Eternal has been cooking for a while, and after taking an extra few months to get its ducks in a row, id Software have delivered a confident, and surprisingly story driven, follow up. From the outset, you'll recognise the scale of their ambition; cutscenes offer more narrative context than ever before, and there's a renewed emphasis on verticality within each level that really pushes the boundaries of your expectation.

The core DNA of what makes this series so special has absolutely been retained, with tight funnelling corridors pushing you inexorably forward that are very much present and accounted for.

But there's also a sense they wanted to expand their horizons somewhat, especially in self contained combat areas that play out more like quick fire movement puzzles than some "boots on the ground" buzzword you'd expect from a typical shooter. Infact, movement and traversal have become an even greater focus of this new instalment.

A new grappling hook provides an excuse for somehow even more gruesome execution animations, but also plays into this idea of momentum and always being light on your toes. Coupled with the fact that performing finishing moves still grants you a health pick up, you're definitely encouraged to bring the fight up close, while still allowing for smart navigation and flanking.

id Software Chuck a grenade in this ones mouth and... he won't be happy.

The gradual march toward new guns and equipment is a satisfying and rewarding loop that keeps you invested even when combat repetition slowly starts to creep in.

You'll always be on the lookout for upgrade stations, and being able to select which abilities to enable first is a lovely touch. Weapon design and handling is frankly best in class, and the gamepad controls (we're playing on Xbox One X) are designed to be as intuitive as possible.

Moment to moment engagements are frantic, and often devolve into a mad dash for ammo as supplies run dry (which happens more often than you think), but by the same notion also does a wonderful job of making you feel as bad ass as demonically possible.

From a presentation standpoint, this is one of the most graphically impressive and smooth performance offerings we've seen to date. Absolutely no complaints in this area whatsoever. There have only been a coupling of stumbling blocks for us holding Eternal back.

Level geometry is incredibly detailed, but we found ourselves getting stuck on certain pieces of scenery in the heat of the moment. Given the speed of combat, this had a tendency to break the flow at key inopportune moments. Although a fairly rare occurrence, it's something worth noting, particularly if you're planning to explore one of the four higher difficulty levels than "Normal".

The sound design on the whole is impressive, but the soundtrack is often exceptionally overbearing. The metal influence totally fits the tone, but it's overused to the point where it becomes an annoyance. Some areas are intense enough without the need to be blasted at every turn; a less is more approach would have nicely complimented the action.

At the time of writing, we were unable to test online multiplayer servers for the new Battlemode competitive offering, which sees two players take on the role of demons against one fully decked out Slayer. There's also the Invasion mode due to be added sometime after launch, which allows for a Dark Souls / Left 4 Dead style drop in to other single player campaigns.

Since multiplayer is being pitched as a key companion to the single player campaign, we're going to hold off on determining a final score. As things stand right now, we would likely award DOOM Eternal an 8/10. If the multiplayer manages to deliver on its premise, then that could easily be adjusted up to a 9.

DOOM Eternal launches March 20th, for PS4, Xbox One, and PC (with a Nintendo Switch version to follow).

Reviewed on Xbox One X.

Lilith Games are celebrating the successful first year of AFK Arena and the team has introduced Ukyo Tachibana as the new hero who will temporarily be available to everyone.

Lilith Games are celebrating the successful first year of AFK Arena and the team has introduced Ukyo Tachibana as the new hero who will temporarily be available to everyone.

TaleWorlds have been quite diligent in delivering updates for Mount & Blade 2: Bannerlord, which at the same time somewhat justifies their decision to launch in Early Access. The latest update brings crashing fixes and more.

TaleWorlds have been quite diligent in delivering updates for Mount & Blade 2: Bannerlord, which at the same time somewhat justifies their decision to launch in Early Access. The latest update brings crashing fixes and more.

Dotemu probably didn't hope to reveal the Streets of Rage 4 release date in such a fashion but Nintendo eShop now states the game is slated for 23 April 2020 release. The official announcement is still pending.

Dotemu probably didn't hope to reveal the Streets of Rage 4 release date in such a fashion but Nintendo eShop now states the game is slated for 23 April 2020 release. The official announcement is still pending.

ZeniMax Online Studio’s Game Director, Matt Firor announced that ESO's Greymoor Chapter and Update 26 will ship out later than anticipated. The delay is caused by the fact that the dev team is currently working from home.

ZeniMax Online Studio’s Game Director, Matt Firor announced that ESO's Greymoor Chapter and Update 26 will ship out later than anticipated. The delay is caused by the fact that the dev team is currently working from home.

Call of Duty: Warzone PC players are reporting various freezing and crashing issues without error code just minutes after the match starts. Here are some of the solutions you can try before Activision deploy a patch.

Dev error 6071 code is one of the most common errors that you'll encounter in Call of Duty: Warzone. It can be pretty frustrating but luckily, there are some potential fixes while we wait for the official patch.

The disc read error is a small but annoying issue that can sometimes show up out of the blue, preventing you from playing Call of Duty: Modern Warfare. Luckily, the error is very easy to fix.

In the latest gameplay steam, the developers of the anime MMORPG Blue Protocol confirmed that the game will be free to play with an option to buy cosmetic items, which will not affect gameplay.

The long-awaited update that adds the ability to travel back in time and complete side quests that players may have skipped during their initial playthrough of Dragon Ball Z: Kakarot will finally be released sometime this month.

League of Legends fans continue to speculate on the new champions to be released this year. Riot Games teased us with some clues in their dev video at the start of the year. A recent tweet from a popular streamer seems to shed even more light on who the new champion could be.

Bandai Namco's anime MMORPG Blue Protocol has two new screenshots, showcasing a new dungeon, that will be available in the beta and a giant summon that helps players during combat.

Warlords of New York has launched in The Division 2 just recently but data miners have managed to bring out a lot of useful info regarding the Exotic weapons and gear. Now we can all know where to farm each of these beauties.

Ian Bell, the CEO of Project Cars developer Slightly Mad Studios has hyped up Project Cars 3, saying that it is still a game-changer and its development is progressing well. More details will be released in the upcoming weeks.

During a QuakeCon keynote, id Software's Marty Stratton and Hugo Martin showed off lengthy sections of DOOM Eternal gameplay and revealed that you'll be able to invade your friends' campaigns as demons, potentially teaming up with others.

id Software confirmed that Doom Eternal won't feature traditional deathmatch multiplayer mode. Executive producer Marty Stratton explained this by saying that they wanted to offer something that's Doom is all about - Slayer vs Demon.

There aren't many games that can boast such rich legacy as Doom, so it's no wonder Bethesda and id Software are using it to sweeten them preorder deals for Doom Eternal. Not that there's any sweetening needed, but it's still a nice touch.

A fresh batch of Doom Eternal gameplay footage has arrived and one of the things that many don't like is the HUD. Luckily, id Software added a ton of customisation options so you can create the HUD that perfectly suits you.

If your plan was to pick up Doom Eternal and Animal Crossing in one Gamestop swoop, we'll have to disappoint you - Centers for Disease Control and Prevention (CDC) issued fresh guidelines on social distancing, which distanced their release by moving Doom one day earlier.

Doom creators id Software have officially responded to Doom Annihilation's bland teaser trailer by saying that they are not involved in the project in any way. The confirmation comes directly from the official DOOM game Twitter profile.

Pre-release hype has rarely been wise recently, but Bethesda and id Software are surely an exception as Doom Eternal seems to tick all the boxes. It looks awesome, has lightning-fast gameplay and the brutality can put many a horror game to shame.

Doom Eternal was supposed to come out in November 2019 but that is no longer the case as Bethesda decided to release it on 20 March 2020 instead.

Doom Eternal will not have the staple Deathmatch multiplayer mode

Doom Eternal will not have the staple Deathmatch multiplayer mode

Bethesda are making big changes as Doom Eternal is apparently stepping away from traditional multiplayer modes that include Deathmatch which is quite ironic since the name is usually attributed to one of the original Doom's co-creators.

With a few more months left until Doom's upcoming instalment hits the proverbial shelves, id Software and Bethesda have released a teaser showing one of Doom Eternal's new and most formidable enemies - Doom Hunter. Worry not, he won't bite.